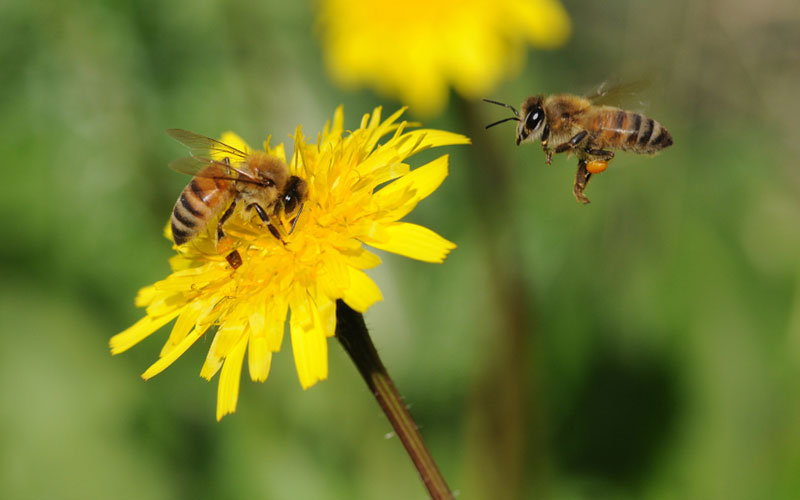 iStockHoneybees give directions through what’s called the waggle dance.

When you see honeybees in a patch of flowers, you might think each found her way there on her own, following the blooms’ scent. But actually worker bees (which are all female) learn about such sites from other bees and fly straight there from their hives, which could be as far as 6 miles away.

Honeybees give directions through what’s called the waggle dance. This performance communicates the distance, direction, and richness of sites that offer everything honeybees need—nectar and pollen, water, tree resin (used for sealing hives), and locations for new hives.

“The waggle dance is a unique form of animal communication,” says Thomas Seeley, a biology professor at Cornell University and author of The Wisdom of the Hive. “It’s a case where one animal can tell another animal about something out in the world far away. That’s something we do routinely, but almost no other species does it.”

A waggle dance consists of a series of figure-eights, performed on a beeswax comb that hangs just inside a hive’s entrance. The bee moves forward in a wing-fluttering “waggle run,” then loops back to make the figure-eight pattern. The angle and duration of the waggle run convey the direction and distance to the attraction. If a bee’s waggle runs point straight up on the vertical comb, the site is in line with the sun’s current position; any angle from the direction of the sun is represented by a corresponding angle from vertical in the dance. The longer the distance to the attraction, the longer the waggle run, which can range from about a tenth of a second to a few seconds.

If an attraction is particularly good, the bee will perform many more figure-eights, and more of the other bees will go to that site.

While the dancer performs, other worker bees try to follow her moves. “It looks kind of like a square dance, the way a dancing bee swirls around and then does it all over again, with other bees following her,” says Heather Mattila, an assistant professor of biology at Wellesley College. “It’s like doing a group dance in the dark without words. The other bees try to keep physical contact with the dancer with their antennae.”

When honeybees create a new colony in late spring or early summer, a swarm of some 10,000 bees will leave their hive and gather nearby with the old queen, usually on a tree branch. About 300 to 500 scouts look for prospective home sites, then report back by doing the waggle dance on the swarm. Once about 100 bees—a “quorum of support”—choose to leave the swarm and spend time at a particular site, that becomes the place for the new hive.

Seeley says, “It’s an amazing way for the swarm—or the colony as a whole—to work as an intelligent unit.” And it’s all facilitated by a deceptively simple dance.