Here are the myths: 1) Over time, long-distance running increases the likelihood of knee arthritis. 2) Walking and running the same distance burns the same amount of calories.

Does long-distance running increase the likelihood of knee arthritis? 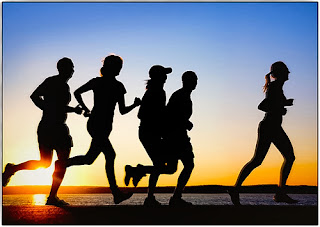 No. Like many people, I have long believed that running is seriously bad for your knees over time (and avoided it largely for that reason). But a recent article in the New York Times has gone a long way to convince me otherwise. As the article points out, numerous long-term studies of runners—including a 2013 study that evaluated the long-term knee health of nearly 75,000 runners—have demonstrated that running does not increase the risk of osteoarthritis in the knees.

More interestingly, a just-published study shows that walking and running generate essentially the same amount of impact force over an equal distance. Why? Because even though running creates more impact force per stride, it requires fewer strides to cover the same distance compared to walking.

So perhaps running isn’t so bad for your knees after all. But there’s one important caveat to all this. We’re talking about only one specific ailment here (arthritis), and there are plenty of other knee injuries that running may (or may not) make more likely. So until I learn more, don’t expect to see me training for a marathon anytime soon.

Which burns more calories, running or walking over the same distance?

Running. This seems like a no-brainer, right? But consider this basic physics question. Regardless of whether you’re running or walking, you are still transporting the same amount of mass (you) over the same distance. So why wouldn’t the amount of energy expended to accomplish this be the same?

When somebody first posed this question to me, I was unable to explain why running might in fact burn more calories. But after digging around online and finding this informative article from Runner’s World, here’s the short answer. When you walk, your center of gravity is moving roughly in a straight line; you don’t bounce up and down much. When you run, your center of gravity moves up and down much more, which means that you are actually moving that mass over a greater distance—and thus burning more calories to accomplish it.

There’s more to it than that, including the relationship between rate of oxygen consumption and calorie burn, but the upshot (according to this Stanford study) is this: Over 1,600 (treadmill) meters, men burn an average of 124 calories running and 88 walking; women, 105 and 74.