Up: A Mother and Daughter’s Peakbagging Adventure 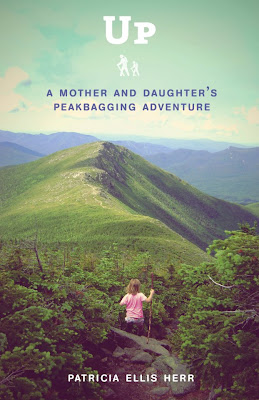 What does a parent do with an incredibly active child? Patricia Ellis Herr’s first daughter, Alex, was “awake all the time” as a baby and “not able to sit still” as a 5-year-old — “a boundless bundle of energy.” Another mother might sign Alex up for classes or ask her pediatrician if her daughter was hyperactive. Trish Herr started taking Alex hiking.

And not just any old hiking: As Herr writes in her newly released memoir, Up: A Mother and Daughter’s Peakbagging Adventure, Alex gets hooked on the idea of earning an AMC Four Thousand Footer badge when she’s just 5 years old. Up describes their 15-month quest to hike all 48 peaks in the White Mountains above 4,000 feet. Alex’s younger sister, Sage, comes along for the ride on occasion, as do Herr’s thoughts on parenting, safety, and the lessons that can be learned at any age on a hiking trail.

Trish Herr is married to climber and MIT professor Hugh Herr, who lost his legs to exposure after losing his way in a winter storm on Mount Washington as a teenager. A rescue worker died in the effort to find Herr and his ice-climbing partner. Trish Herr retells her husband’s story in Up, but for the benefit of her daughters, and with a stern focus on the consequences of seemingly small decisions.

Risk and safety are central themes of the book. The first chapter describes a terrifying thunderstorm on Mount Tom, seven summits into their adventure. Herr and her daughters crouch on open ground as hail pelts their backs and lightning strikes so near that it raises the hair on the back of Herr’s neck. Alex becomes separated from her mother and sister when they make a dash for the trees. The chapter ends with mother and daughters safely back at the car, eating chocolate bars promised for the summit, and with Herr uttering the book’s first and precautionary lesson: “[S]ometimes things happen that you can’t prepare for.”

In fact, throughout the book, Herr takes what this reader considers a refreshing stance toward risk and danger in the mountains, especially where children are concerned. She makes sure that her daughters carry whistles and know how to use them, and drills Alex on how to keep herself warm, hydrated, and fed before taking her on winter hikes. But she also has little patience with people they encounter who are surprised to see such young children — and such young girls — on steep and rocky or snow-covered trails. When people express concern for the girls’ safety, Herr lets us feel her initial flair of irritation, but also shares the anxiety she feels when an axe-wielding man gets too close to Alex. 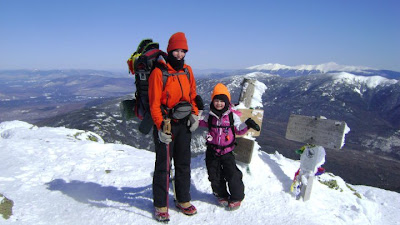 Every chapter includes trail-tested ideas that will be useful for families interested in getting young children out on the trail. Each chapter also points toward a single lesson, which is neatly summed up by its title. Some of the titles would do well as bullet points in a list of hiking tips:
– Know what you’re getting into
– Some risks are worth taking
– Roll with the punches
– Little things matter (a lot)

Others could be straight out of an empowerment seminar — “‘I Think I Can’ works,” “Ignore the naysayers” — and my personal favorite, “To get to where she wants to go, a girl must punch through rotting snow.” Any early-season hiker knows exactly what character-building is going on in that chapter.

Up will likely appeal to hikers, and to anyone interested in children in the outdoors, but it may have special appeal to mothers and daughters. Readers looking for more about Hugh Herr will find little here; the book’s primary relationships are those between Trish, Alex, and Sage, and Herr’s fierce love for her daughters and for their abilities runs across every page. This is not a book about a parent dragging her children off on her adventure: It is the story of a mother following and guiding her children’s passions, and encouraging her daughters to find and develop their strengths.

Herr took Alex on her first 4,000-footer hike thinking it would be a great outlet for her daughter’s excess energy. Four years later, mother and daughters continue to spend many hours on hiking trails and pursuing new goals. At the end of the book, Herr concludes her summation of what her daughters have learned by hiking mountains with this stirring sentence: “Above all else, they know that little does not mean weak, that girls are indeed strong, and that practically anything is possible.”