Visit an Urban Wild Near You 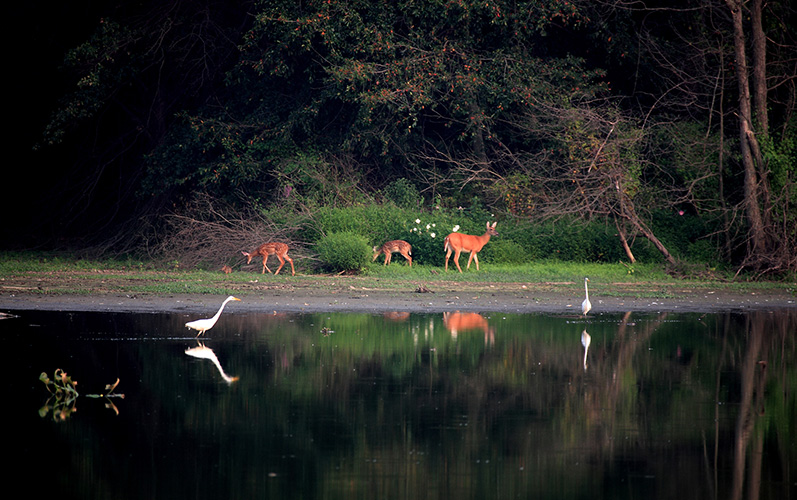 You don’t have to venture far to get a taste of untamed nature, thanks to the efforts of more cities establishing urban wilds within their footprint. Often protected and managed through public–private partnerships, these areas are almost entirely unmaintained, allowing flora to grow with minimal human interference. They play a critical role in health and quality of life, cooling hot summer temperatures in the city, releasing oxygen, and helping slow climate change through the vegetation’s capture and storage of carbon. An urban wild—an oasis among the brick and concrete—is waiting in a city near you.

Deering Oaks Park is among the pockets of protected land the Portland Parks Division calls “urban meadows.” Deering Oaks Park and the city’s other meadows serve as vital habitats for native wildflowers, grasses, bees, birds, and butterflies, which flourish here on their own accord. The lack of human maintenance and landscaping not only allows nature to thrive as it would without human intervention, but also creates a serene, picturesque area for visitors to unwind from the bustle of city life.

For more than a century, this 60-acre, city-run park has provided individuals with shaded walkways under oak and maple trees, while the remainder of the park and its wildlife, like the six other Burlington Urban Wilds areas, continues to provide an untouched habitat for rare and endangered plants and animals. The park’s nutrient-rich dolostone helps sustain plants like the white oak and shagbark hickory, both uncommon in other parts of the state. Wander your way through the carriage roads and dense forest to the popular “Pinnacle” overlook toward Lake Champlain.

The second-largest unfragmented woodland in the city, Allandale Woods is located on the Jamaica Plain–West Roxbury line. The lush parcel, protected and managed by the City of Boston, represents the city’s first step in purchasing and creating the Charles-to-Charles Open Space Corridor, an 8-mile line of parklands, private estates, and wetlands reaching from the Back Bay Fens and the Charles River Basin to the Charles River in West Roxbury. Take a walk past babbling streams and a cattail marsh on one of the forest’s restored trails, built by summer youth conservation crews from around Boston.

Van Cortlandt Park, with its 20,000-year-old rock outcroppings and 150-year-old trees, is just a quick subway ride from the center of New York City. Once used as hunting grounds, the Bronx park’s 1,446 acres are divided into the Northwest Forest, Croton Woods, and Northeast Forest, altogether containing 30 miles of multiuse trails. More than half of Van Cortlandt Park is protected as an “ecologically valuable” forever wild preserve, one of 51 such spaces. This status has helped shield the park’s three major habitats—forests, wetlands, and meadows—from damaging construction and development.

More than 300 migrating bird species stop at the John Heinz Refuge on the Delaware River, many of them nesting there for longer. The Friends of Heinz Refuge hosts events almost weekly to raise awareness and support for the space, designated an “Important Bird Area” by the National Audubon Society. As the country’s first urban refuge, according to the U.S. Fish & Wildlife Service, it follows three mandates to maintain its status: restore the wetlands wherever possible, promote environmental education, and provide wildlife-oriented recreation opportunities for visitors—like kayaking and archery.

In 1975, Congress designated 6,600 acres just north of Atlantic City as wilderness area, announcing that the land should remain undeveloped and unaltered. Today, the marshes, beach, and dune habitats of the Brigantine Wilderness are situated within the Edwin B. Forsythe National Wildlife Refuge (NWR) and full of protected species, including American black ducks, piping plovers, white-tailed deer, and box turtles. With activities ranging from photography, to animal-watching, to canoeing, visitors have numerous opportunities to take a break from Atlantic City’s neon.

Mason’s Island was renamed Theodore Roosevelt Island in the 1930s after the Theodore Roosevelt Memorial Association purchased and transformed the overgrown, neglected farmland on the Potomac River into a memorial for the 26th president. You can see downtown Washington, D.C., from the human-made forest, designed to mimic the island’s original natural forest while paying tribute to Roosevelt, a passionate and impactful conservationist. The National Park Service manages the area, where visitors are free to wander through the thickly interspersed trees, enjoy the natural environment on trails weaving throughout the island, and, of course, take in skyline views from across the river.

Richmond’s James River Park holds the title for the most visited park in the city, but don’t let that deter you—the sightseers stop by for a reason. With acres of shoreline stretching up and down the river, this park provides a picturesque area of wilderness in the heart of Virginia’s capital. Whether you go to see the park’s wetlands wildlife, take a kayak trip, use the climbing wall, see historical landmarks, or just bike or walk around and enjoy the scenery, James River Park should definitely be at the top of your list.