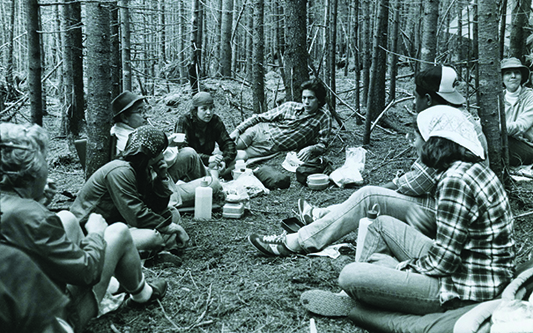 AMC Library & ArchivesWalter Graff (center, in 1981, on a White Mountain backpacking workshop) shepherded AMC’s conservation in Maine’s 100-Mile Wilderness and will retire in 2020 after 45 years.

Walter Graff almost didn’t make it past his first summer at AMC. When the 22-year-old walked into what was then called Pinkham Notch Camp in July 1974, the recently hired program manager’s first job was screening 60-millimeter environmental films for guests in a newly built conference room. “By the end of the summer, I had memorized Everest and Miss Goodall and the Wild Chimpanzees,” he recalls, “but that’s not what I wanted to be doing. I told the Pinkham hutmaster that I wanted to start a workshop program.”

Graff began lining up regular classes at the lodge on topics such as equipment maintenance, snowshoeing, and alpine flowers—an outdoor education program that would become one of New England’s largest. Forty-five years and many title changes later, Graff will retire as AMC’s executive vice president in February. We asked him to reflect on his nearly five decades with AMC, how outdoor recreation has changed (and not), and what retirement looks like for someone who can’t sit still.

AMC then was a much smaller organization. I think there were maybe 25,000 members. The Highland Center wasn’t built, so we just had Pinkham Notch Camp. The executive director at the time was Tom Deans, who lived in Intervale, N.H., and he commuted back and forth between the Pinkham office and Boston. The key professional people were an education director, a trails director, and a research director, based out of New Hampshire. One of the key positions up here was the huts manager. That was the professional team. In Boston, it was more administrative services.

The club was very different. When I came, you still needed two signatures to become a member. I tried to sign as many people up from behind the desk at Pinkham as I could to move us away from that.

You’ve worn many hats at AMC, from a program manager at Pinkham to head of communications to executive vice president. Since 2002, you’ve headed up AMC’s Maine Woods Initiative. Which of your contributions are you most proud of?

There are three things. First, starting the education programs that introduced thousands and thousands of people to the outdoors over time.

The second thing is I was able to get us through the hut re-permitting process between 1995 and 1999. It was a bureaucratic thing, but it was important for the club, in that the club realized we needed to be more involved at the community level, and we had to rebuild the organization to work with local people, local schools. That set the stage for the Maine Woods Initiative. I said, we need to look for another place to set up recreation and conservation.

To some extent, the legacy of Maine is the most important to me: that we protected 100,000 acres for future generations and created something that’s so meaningful, in opening up recreational opportunity and our contribution to the future of the planet.

How is recreation in AMC’s region the same, and how has it changed?

The use of the White Mountains slowed down for several years, but it’s back up now. It’s beyond anything we could’ve imagined. Every parking lot is full. It used to be that just spring skiing and a few holidays [were crowded], and now it’s almost every day in August. The diversity has grown substantially, in terms of who’s coming to the mountains. It’s a real sea change.

What do you see when you look at AMC today?

I see a vibrant organization. The heart of AMC is in the mountains, the rivers, the lakes, and the forests. I think that’s who we are. We’re unique in getting our members connected to the outdoors and putting in sweat equity, working on the trails. The future of AMC is continued leadership, and I think to do that, we need to stay at the heart of who we are: connecting people to the outdoors so they love and protect it.

What are your retirement plans?

I’m going to take a break, for sure. But there’s so much more to do now, in terms of climate change and caring for the planet. I imagine I’ll be back at it. I can’t imagine hanging up my hat. That’s not in my DNA.