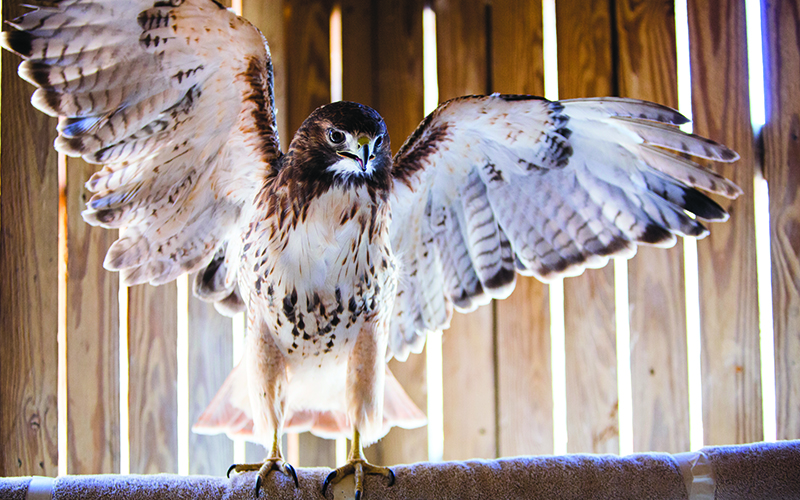 A red-tailed hawk with a bullet to its wing. A bobcat hit by a car. A toad with a wounded leg.

Patients like these are often admitted in serious pain, according to Dr. Florina Tseng, director of the Tufts Wildlife Clinic at Tufts University’s Cummings Veterinary Medical Center in North Grafton, Mass.

Determining pain levels helps veterinarians know how to medicate wildlife in order to bring relief. To quantify just how much pain animals are in, Tufts clinicians use behavioral cues—a practice supported by a groundbreaking 2014 Tufts study of pain in red-tailed hawks. The researchers’ findings on hawks may lead to advancements in the treatment of other wildlife.

Pain is a growing challenge for wildlife veterinarians, as human and wild animal habitats collide. The Tufts clinic is treating record numbers of wild patients harmed by contact with cars, windows, bullets, fishhooks, and more. From American toads to Eastern cottontail rabbits, the clinic admitted 4,211 wild animals in 2018—up 13 percent from the previous year—including 1,758 mammals, 2,228 birds, and 183 reptiles and amphibians. “Because we see so much trauma in all sorts of different species, we were very eager to study pain in wildlife,” Tseng says.

Unlike pet dogs and cats, little is known about pain in wild animals. Stressed-out by hospitalization, they often hide their discomfort, making it tough to treat. Managing wild animals’ pain is both humane and practical because it speeds healing, Tseng explains. “If [an injury is] fixable, reducing their pain helps, because pain is a stressor in any animal. In birds [with heightened stress], you get increased levels of corticosterone over a period of time that lead to immune suppression and delayed healing.”

Tufts’ pioneering study, which Tseng coauthored and was published in the journal Applied Animal Behaviour Science in 2014, documented a link between pain levels in injured red-tailed hawks and certain behavioral cues. The researchers split 19 red-tailed hawks—a species chosen for its commonality in North America and relatively low stress in captivity, according to Tseng—into two main groups: hawks admitted with painful injuries and those not in pain.

Among hawks with painful injuries, the clinicians compared behavior soon after admission and receiving pain meds to the hawks’ behavior two weeks after surgery, treatment, and some healing.

The findings: Birds determined to be in pain moved their heads less, moved less in their cages, and did less of the normal beak clacking “that says, ‘I’m angry, don’t come near me,’” Tseng reports. Over the same period, researchers observed no change in a control group of hawks hospitalized for non-painful problems, such as getting covered with pine sap.

“The main conclusion is there are behaviors in red-tailed hawks associated with pain,” Tseng says. Tseng says the study was the first to look at behavior in injured wild hawks that pain suppresses or subdues, as opposed to the behavior pain causes.

Building on the study and aided by new data tracking drug effects on birds, the clinic has since increased doses of the opioid buprenorphine, which remains longer in injured hawks’ pain receptors, and has begun using it in time-release form. These tweaked doses mean clinicians need to handle the birds fewer times for repeat injections, stressing the birds less.

“Not only are we trying to give them pain medication to combat pain, but we’re also conscious of what housing they have—what cages—so they feel safe enough to eat,” Tseng says. “The goal is to get these birds out of here [and back in the wild] as quickly as possible.”

Does the hawk research translate to how clinicians determine and treat other species’ pain? Not yet, Tseng says, because mannerisms vary from species to species, and additional research is needed. The clinic does not currently have such a study scheduled but hopes to in the future.

“If we have it in our power to alleviate the pain in our patients, that’s what we’re going to do,” Tseng says.