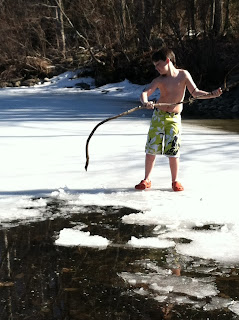 Almost exactly a year ago, I wrote what I thought then was my final entry for this blog. Over the course of nearly 300 posts, I’d explored “great kids” in the “great outdoors”—in many cases my own two children, Ursula and Virgil, and their explorations out the doors of our home in rural New Hampshire. When I started, Virgil was 6, Ursula 10. For three years spending time together outdoors, this blog was our constant—or at least potential—companion. I was ready to be outside with them without writing about the experience.

There was another reason to stop writing. After 17 years in New Hampshire, we were returning to Seattle, where I lived when Jim and I first met. I wanted our children to spend time in a different “great outdoors.” But we weren’t leaving behind the landscape they loved: We were keeping our home in New Hampshire, and we made a pact to return during vacations. Shortly before we headed back for spring break, Heather asked if I’d contribute a guest entry. After months away, I welcomed a reason to watch and muse on my children back in their old landscape.

That said, we’d heard that spring was much delayed in northern New England. It was everywhere in Seattle on the Friday we left—flowers blooming, trees in full blossom—while New Hampshire was getting hit with four inches of wet, slushy snow. Taking the train to SeaTac airport, we ran into one of Ursula’s high school classmates. He and his parents were also flying into Boston, where his mother would run her first Boston Marathon. We’d watched the marathon last year, we told them, cheering on runners at Mile 20 just before Heartbreak Hill, after starting the day in Lexington with the re-enactment of the “shot heard around the world.” Patriot’s Day in Massachusetts, we told them, was a celebration worth flying across the country to join.

Arriving at our house, we saw that ice still covered the pond, and large patches of snow stubbornly held on where wind had deposited it in deep drifts over the winter. With youthful ease, Ursula and Virgil flipped the switch: This is what spring looks like in New England. Virgil ran out on the ice, jumped on it, and beat at the edges with a heavy stick. I put his chances of whacking his way to a cold dousing at nearly 100 percent. He stood close to shore in shallow water, so he submerged only his ankles when the inevitable occurred.

The next day was warm, and even though we’ve seen it happen before, we were amazed by how quickly the ice went out. We could hear the pop, pop, pop of water bubbling up through holes in the ice, working on it from below as the sun warmed it from above. As soon as the ice had retreated far enough from our shore, Ursula and Virgil and their friend Kirsten waded in for the annual ritual dunk and ran back out screaming and laughing.

Within hours, the first loon touched down on open water, soon joined by its mate.

Over those first days, I noticed differences between here and there that went beyond season and landscape. Here, New Hampshire, we had no cell phone coverage and only intermittent, weather-dependent Internet access. There, we had all become quickly accustomed to turning to a cell phone or computer to find answers to questions, or just for easy stimulation. Virgil, now 10, had grown especially accustomed. I wondered if he would complain about the lack of access here. It wasn’t as if he didn’t notice, but he seemed proud to be finding so many things to do without it.

Here, he and Ursula pulled out board games and puzzles. Here, Ursula climbed her favorite trees (though it must be said, with the new accessories of iPod and earphones). Here, when friends came over, they went down to the barn and rooted around in the costume bin, then raced around the yard acting out some comedy-drama that they refused to describe to me. Here, the kites came out on a windy day, and they had plenty of room in which to launch them. Here, although spring was clearly delayed, even for New Hampshire, it was also just as clearly coming: daffodils emerging on the south side of the house said so. So did new buds on the trees, and the quacking croaks of the wood frogs partying in sun-warmed water that had collected inside an old stone foundation down the road. Spring was coming, another year starting up again.

With pleasure, we could hold off the forward running of time, slow it down, even turn it back. Ursula, now 14, who has struck us as more of a teenager lately, talking about wanting to learn to drive and giving herself a crash course in pop music, seemed happy to shed all of that like city clothes.

In Seattle—“there”—both kids have become proficient bus and train-riders; their “free-range” radius has extended from barely a quarter-mile to 5 or 6 miles for Ursula and a solid mile for Virgil. They ride bikes, run across the street or down the block to play with friends, play pick-up games of Ultimate Frisbee in the park nearby and street hockey two blocks over. Seattle, like Boston, is a city built around its parks, green spaces, and water, with a history of making those natural spaces accessible to all. Taking advantage of this greater freedom has meant learning to assess different risks: how to cross four lanes of traffic, whether to avoid those men on the corner.

All these thoughts—the difference between urban and rural landscapes, spring on two coasts, the innocence of children, a parent’s sense of safety and protectiveness—have been darkened by the shadow across Boston following this year’s marathon. And perhaps sharpened, as well. Watching our children, I felt keenly how fleeting a season is, how precious, and what matters.