Where Can You Buy Polar Pure? Nowhere.

For nearly three decades, Polar Pure offered one of the best, most economical ways to treat water in the backcountry. But since 2011, it’s no longer available for purchase. Why? Its active ingredient—pure iodine crystals—can be used in a process to create methamphetamine. As a result, the Drug Enforcement Administration (DEA) and State of California passed new regulations in 2011 that classified crystal iodine as a controlled substance—and essentially sounded the death knell of Polar Pure. 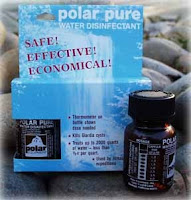 Developed in the late 1970s by Bob Wallace of Saratoga, California, Polar Pure consists of a small brown glass bottle with a small amount of crystal iodine inside.

To use Polar Pure, you simply fill up the bottle with water, let it sit for an hour, and a tiny amount of iodine dissolves into the water. You then pour a few capfuls into the water you want to treat. The amount required varies depending on the temperature of the water, but in general, a full Polar Pure bottle is sufficient for treating roughly 2 liters of water. An integrated “particle trap” extends inside the bottle below the opening (see image below) to prevent the crystals from coming out.

Polar Pure has a number of advantages, including the fact that it can be used to treat up to 2,000 quarts of water. It retailed for about $10, so if you used it to its potential, that works out to a cost of $0.005 (that’s half a cent) per quart—far, far less than any other water treatment option available. Another plus is the fact that Polar Pure has an indefinite shelf life; it never goes bad.

Unfortunately the 2011 regulations set by the federal DEA and State of California have made it all but impossible for the makers of Polar Pure to acquire the iodine crystals needed for the product. Even if Polar Pure successfully navigated the permit process to acquire the iodine, any retailer wishing to sell it would also have to fork over more $1,200 to the DEA (plus any applicable state fees) to do so.

You can read all the unfortunate details here, including Polar Pure’s ongoing efforts to find a way back on to store shelves. But the main upshot is this: Don’t expect to see Polar Pure any time soon.

I have used Polar Pure as my go-to water treatment for nearly my entire hiking career. With the prospect of replacing my one remaining bottle slim to none, I cherish it these days like it contains flakes of gold.