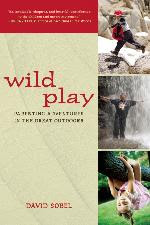 If the phrase “parenting memoir” brings to mind tiger mothers and hipster fathers or over-the-top over-sharing on bringing up baby, then you might be misled by a new title in that genre. Luckily, the subtitle of Wild Play, “Parenting Adventures in the Great Outdoors,” helps put both “Wild” and “Play” in context.

The parent behind Wild Play is David Sobel, a faculty member at Antioch University New England who has done pioneering work in environmental education. Richard Louv drew on Sobel’s ideas about place-based education in Last Child in the Woods, Louv’s best-selling indictment of “nature-deficit disorder.” In articles and essays in Orion, Sierra, and other magazines, Sobel has often drawn on his own experiences as a parent, raising a daughter and son in the Monadnock region of southwestern New Hampshire. Wild Play is Sobel’s earnest attempt to consider ideas he’s spent his career working on — principles of children’s development in connection with nature, and strategies for developing those connections — in the light of his own experiences as a father.

Sobel comes across as a loving and devoted father, and as someone who has thought deeply about the value of spending time outdoors throughout one’s life. Within the framework of his own family story, Sobel offers useful ideas for parents who want to create similarly strong attachments in their children.

His description of childhood development in relation to natural metaphors is worth the price of the book. He uses the image of the meadow for the first of three stages in a child’s connection to nature — close to home, safe, small explorations with family nearby. For middle childhood, the metaphor is the forest beyond the meadow. Parents and children may explore the forest together, but children may also, as Sobel writes, “follow secret paths to hidden forts, with their friends or on their own.” For adolescence into young adulthood, the developmental focus shifts to what Sobel calls “the rocky ridge,” a place that includes “boulder caves for secret ceremonies,” steep slopes for risky adventures, and pathways to “the wilderness beyond the ridge” — the adult lives they’ll eventually navigate on their own.

Wild Play gave me specific ideas, too: the value of story-telling in building a lifelong connection between children and the natural world; using treasure and scavenger hunts to develop an awareness of the natural world, not only in early childhood but into adolescence; the notion of islands as “intimate geographies” in which children and families can create full worlds.

I especially took to heart Sobel’s thoughts on a transition that girls often make at the end of middle childhood. He notes that the years leading up to adolescence, roughly ages 10 to 13, can be a time of deep connection with the natural world; in adolescence, girls tend to focus more on new webs of social connections. Sobel thinks that some of the clarity and confidence of late middle childhood can be brought into adolescence by making sure that teenage girls continue to have time alone in nature, separate from the social world of peers.

Sobel makes a disarming admission early on: “I had conscious aims in parenting that dovetailed with my work,” he writes — then adds, “There’s nothing like actual parenting to make theories look foolish.” One of the real-life situations he deals with in the memoir is the break-up of his marriage when his daughter and son are 14 and 12. As someone who writes about my own family’s experiences in the outdoors, I’m sympathetic to Sobel’s desire to keep out of the darker glades of his family’s story or off its steeper, scarier slopes.

At times, though, I wanted him to reflect on what he or his family might have traded off or set aside in pursuing his particular vision of a nature-centered and place-centered childhood. Letting us travel some of his family’s rough spots — rebellions, failures, what a connection to nature couldn’t fix — would have harnessed some of the wild energy that makes memoirs so compelling.

But this is a small quibble about a thoughtful exploration of nature and family, deeply rooted in its northern New England landscape.