Wild Turkeys: A Conservation Success You Can See 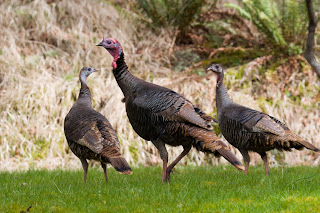 Last summer, my daughter and I spotted a flock of wild turkeys at Drumlin Farm Wildlife Sanctuary in Lincoln, Mass. The Mass Audubon property includes exhibits of rescued wild animals, such as owls and foxes, in addition to farm animals like chickens and pigs. So when we noticed the big brown birds in a fenced field, it took me a moment to realize that they were not part of the educational programming. As my daughter and I watched, one turkey flapped right out of the enclosure, proving that they were visitors just like us.

Wild turkeys haven’t always been so abundant in this area. In fact, these glorious birds were on the verge of extinction in the early 1900s. But thanks to conservation and re-introduction efforts, they have rebounded and even expanded their range.

Habitat
Since that chance encounter last summer, I’ve studied up a bit on wild turkeys, and learned that the habitat around Drumlin Farm is just what they like: hardwood forests with scattered openings. According to the All About Birds website run by the Cornell Lab of Ornithology, the birds typically forage on forest floors, eating acorns, other nuts and seeds, fruits, bugs, and salamanders. They can also be found in grasslands and swamps. In mating season (February through April), they build nests in depressions on the ground, hidden by leaves and other vegetation. Adults roost in trees at night.

History
As any schoolchild might tell you, wild turkeys were an important food source for indigenous people in what became the Americas. But hunting and the development of previously wooded habitat eliminated the wild turkey from most of its range by the early 20th century.

Re-Introduction
Early re-introduction efforts using game farm turkeys failed. Starting in the 1940s, wild turkeys were caught and relocated to areas where previous populations had been decimated but woodlands were recovering. The transplantations worked so well that wild turkeys now live in areas where they may not have when Europeans first reached the Americas. Alaska is now the only state in the United States that does not host wild turkeys. (Yes, that means Hawaii has them.)

The numbers speak volumes for this conservation success: According to the National Wild Turkey Federation, a nonprofit that promotes conservation and hunting of the birds, the wild turkey population in the United States skyrocketed from a low of 30,000 in the early 1900s to more than 7 million today.

What to Look For
When you or your child pictures a stereotypical turkey, the image is probably that of a male. The males display the blue-gray head and neck with pink wattles, the leg spurs, and the bright “beard” of modified chest feathers. They strut with their tails fanned to get attention during mating season, and they “gobble,” making a distinctive sound that is meant to attract females and that can be heard a mile away. Females have more subtle brown coloring and sometimes have small beards. The birds are large, up to about 3 and a half feet, and can weigh more than 18 pounds. I think it was the size that caught our eyes when we were at Drumlin Farm; these birds are huge!

What to Listen For
The wild turkeys we saw were quietly scratching for food. But you can listen to wild turkeys gobble, hiss, and cluck in recordings from the Cornell Lab of Ornithology. Then head out and listen for them in the wild.

Learn More
As Thanksgiving and other holidays approach, consider creating your own outdoor holiday traditions.

Read more about wild turkeys in this Junior Naturalist post.