Winter Arrives in the Presidential Range

Roughly 4 inches of snow fell Sunday night on top of Mount Washington at the Mount Washington Observatory (MWO). As of 6 a.m. Monday morning, temperatures hovered around 23 degrees, with a brisk 31 mile per hour wind blowing in from the northwest. Other high peaks in the Presidential Range also got pasted with snow during the brief early-season storm. Whether or not this snow lingers for any length of time, one thing is clear: Old Man Winter has shown up for the season. 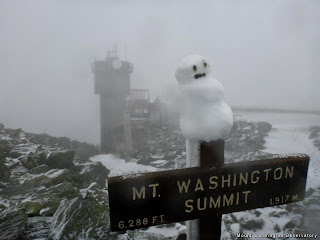 Sunday night wasn’t the first snow of the season atop Mount Washington. Trace amounts actually fell on the summit on September 8 (season’s first snowflakes) and September 15 (0.4 inches). Then on October 1 about an inch of snow arrived, enough to build New England’s first snowman of the season (who successfully summitted, as the picture shows).

But Sunday night’s storm brought the first significant snowfall, one that will likely linger for at least a few days as cold temperatures continue at higher elevations. And odds are that more early-season snow is on the way this month—on average, 17.6 inches fall on the summit every October.

To keep tabs on the latest conditions, you can always check out the free web cams operated by the MWO, including views from Bretton Woods, Wildcat Mountain, Attitash Ski Area, and Jackson. Webcams are also located on the summit of Washington and capture views north, views west, and across the observatory’s observation deck. You can find them all together on the Mount Washington Observatory Webcam Network. (MWO members receive access to nearly 20 more views from the webcams; membership starts at $45.)

Here’s a (snow-encrusted) shot from the Wildcat Mountain cam at 6: 45 a.m. Monday morning (Mount Washington is in the upper left): 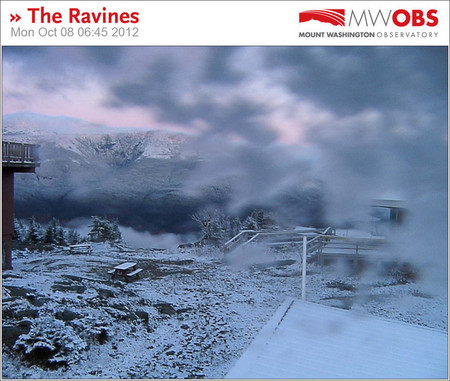 Gear-wise, if you’re planning on tackling the high peaks this month, definitely prepare for full winter conditions above treeline. Most importantly, this includes the ability to protect yourself from head-to-toe from the nose-nipping, finger-freezing, and potentially frostbiting winds of early winter. (Here are my recommendations for full face protection.) Other winter gear you can likely leave at home for the month—including snowshoes and ice axe—though you may want to consider bringing a pair of lightweight crampons to deal with potentially icy conditions higher up.