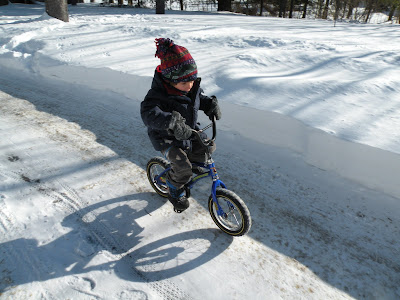 We put our bicycles in the barn after the early snowstorm last month and haven’t been planning to bring them out again until spring. But driving the school carpool one day last week, I heard a radio report on two cyclists from Vermont, both psychotherapists, who are encouraging people to bicycle through the winter.

The self-styled “cycle therapists,” Dave Cohen and Phil Brubaker, had some specific on-the-ground advice for winter cyclists: Put winter tires on your bicycle (who knew you could get studded snow tires for bikes?); let some of the air out of the tires for better traction; and dress for the weather, paying special attention to keeping feet warm. Cohen and Brubaker run bike workshops to encourage adults and children to spend time outside all year, even during the winter months. Speaking as a mental health professional, Brubaker told the Vermont Public Radio reporter that there’s plenty of evidence pointing to the benefits of daily aerobic exercise: “Even just 20 minutes a day is a huge boost to mental health in general,” he said, further noting that people often struggle with depression during the winter months. 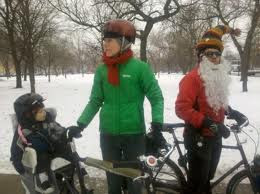 The radio spot got me thinking, and looking. At my computer, I found Bike Winter, a website dedicated to winter biking whose practitioners approach the topic with good humor: “While riding in the summer seems normal,” one writes on the site, “cycling through the winter seems, to the uninitiated, as painful and ill-advised as licking a frozen pole.” The site’s page on winter biking with young children offers expert advice on navigating a bike trailer in slush and debates the relative advantages of bike trailers and bike seats for winter riders with children. It also introduced me to cargo bikes — “the SUVs of the bike world” — apparently an idea imported from the bike-friendly Dutch.

And if I’d doubted that children can continue biking through the winter, several stories on the national Safe Routes To School (SRTS) website convinced me. Safe Routes To School funds efforts by schools and communities to get more children walking and biking to school. In Anchorage, Alaska, a place that knows winter, the school district surveyed parents and discovered, not surprisingly, that they were concerned about their children’s safety during winter months, when there are often fewer hours of daylight than hours in the school day. The district partnered with the city of Anchorage and the state highway safety office to offer free reflective tape to more than 10,000 schoolchildren and then encouraged the children to come up with their own reflective designs. To celebrate the coming of spring and longer days, the district held a reflective tape fashion show. The district also partnered with a regional hospital to donate between 75,000 and 100,000 free bike helmets to students. School nurses handed out the helmets and helped fit them. The district saw increases between 30 and 70 percent in the rates of children walking or biking to school year-round.

At Bear Creek Elementary School in Boulder, Colorado, two-thirds of students lived within two miles of the school, but only one-quarter regularly walked or biked to school. The school’s SRTS program started with incentives and prizes. Students who used “active transportation” to get to school received daily recognition in class and in prominent displays and events at school. Principal Kent Cruger instituted the Cruger Cup, a year-long challenge to students to arrive every day without a car. Cruger took the challenge himself, arriving at school on bicycle, skateboard, and even a unicycle. Another teacher used the Tour de France to motivate students, forming class teams. Students kept monthly tracking sheets and won arm bands in different colors for different categories of trips, resembling the “leader jerseys” at the legendary bike race.

Students became so determined to meet these challenges that they insisted on bringing gear for an overnight school trip in bike trailers. By the end of the federally funded program, 70 percent of the school’s students had made biking or walking to school a daily habit. With such a change in the culture of the school and community, the school is finding that fewer external rewards and incentives are needed. One of the pictures accompanying the story shows smiling students walking, and biking, through snow.

I think of Phil Brubaker in Vermont. He said of his winter bike commute that it doesn’t take much time, but it makes his day.

Learn more
– Get tips from AMC on cycling through the winter, including how to prepare your bike and what clothes to wear.
– Read or listen to the “cycle therapists” on Vermont Public Radio.
– Check out the Bike Winter website. Or read this blog post from a real winter-biking kid.
– Learn about cargo cycles. Don’t miss the informative section on family cycling!
– Find success stories from all 50 states and Washington, D.C. at National Safe Routes To School.