Winter Traction Watch: Hillsound Trail Crampons and Snowshoes Made for the Norwegian Military

Deep snow, cold temperatures, and slick conditions are upon us throughout much of the Northeast. If you’re headed outside for winter adventure, that means it’s time to strap some extra gear to your feet.

I’ve written extensively over the past few winters about the myriad options available for winter traction, from the latest no-slip winter boots to snowshoeing 101 to studded running shoes to crampons and other winter traction options. Now, to add to the list, I wanted to highlight two more entries into the genre. 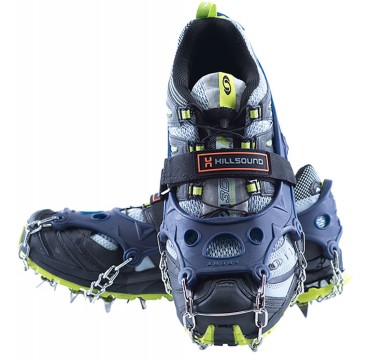 Consider these if you’re looking for substantial traction but don’t need a pair of full-on steel crampons. A series of short, sharp metal teeth underfoot provide solid grip on ice and hard-packed snow, making them a good choice for most winter hiking adventures over moderate terrain.

One of the great thing about this line of crampons is that they can be attached to virtually any footwear, from stiff winter boots to trail running shoes, making them an excellent and flexible option for a variety of winter outings. To put them on, simply insert your toe into the front of the stretchy rubber harness and then pull it back and over the heel. Both the Trail Crampon ($60) and lighter weight Trail Crampon Ultra ($70) feature an additional Velcro strap across the instep for extra security and a tighter fit.

It’s important to note, however, that they lack front points, which makes them a poor choice for ascending very steep and icy or hard-packed slopes. And while they fit reasonably securely, side-hilling on icy slopes will cause them to shift around underfoot, which can be both unnerving and potentially dangerous.

These crampons have gotten rave reviews online, including a thorough discussion of the different models from Philip Werner at SectionHiker, who has used them extensively. 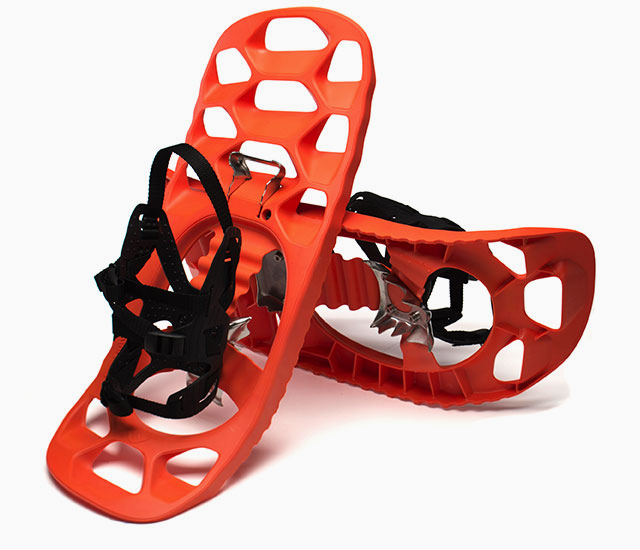 The snowshoe world is basically dominated by three companies—MSR, Atlas, and Tubbs—so I’m always intrigued by potential new entries into the market. Enter the Norwegian company Fumbulvetr (Norse for “the great winter”), which makes a series of plastic-decked snowshoes that were originally designed for the Norwegian Armed Forces.

The simplicity of its designs is one of the brand’s hallmarks—the deep-powder Rangr snowshoe ($299) features only 12 components, including nuts and bolts, which means there’s less to break or go wrong. A lay-flat binding system also makes them easy to strap on to your pack when not in use. The Hikr ($270) is the beefier option for steeper terrain, and features both a heel crampon for extra grip and a heel bar to support your burning calves on long ascents.

While they are heavy (between 4 and 5 pounds per pair, depending on model), they are also unquestionably designed for serious and long-term backcountry use, and worth considering for avid winter adventurers. And, hey, when was the last time you bought an item of outdoor gear that was made in Norway?