Essential Books to Read this Winter 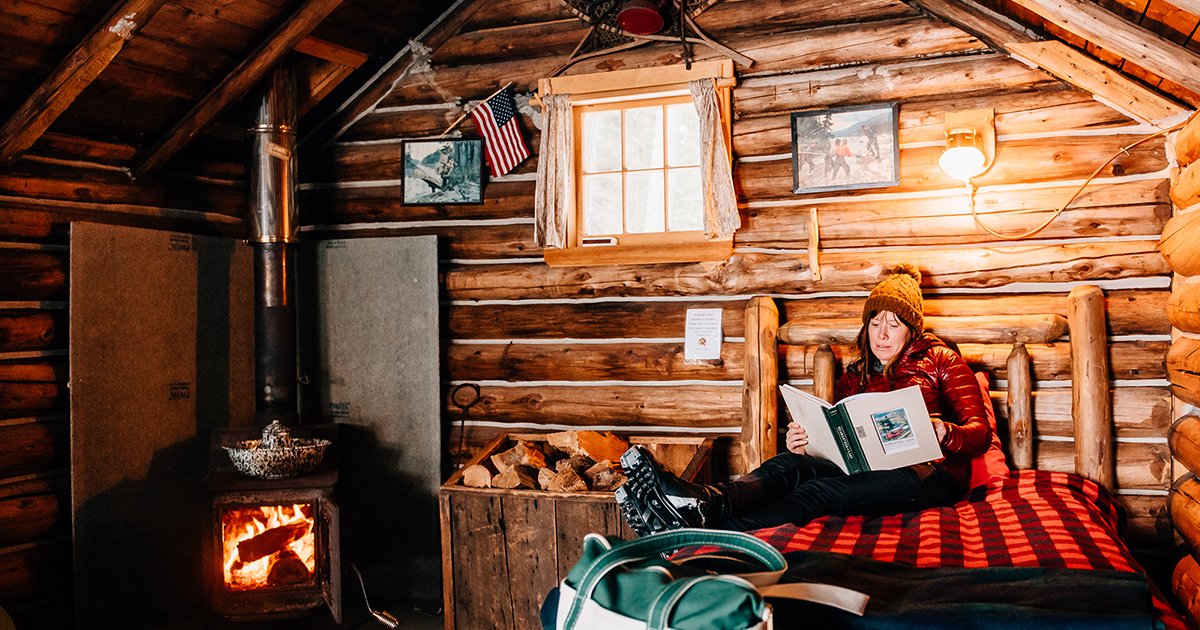 Cait BourgaultCurl up with one of our recommendations from this winter reading list and let it inspire your next adventure.

Colder weather and shorter winter days draw mixed reactions from those who love the outdoors. For some, the snow and ice are a welcome change, kickstarting the winter sports season, while for others, it means time spent cozied up indoors by the fire. Whether you fall into one category or the other, or are a mixture of both, this colder season beckons you to embrace the hygge lifestyle and slow down with a good book.

We asked AMC staff for their favorite books about the outdoors to help inspire your next adventure or teach you something new this winter. So, slip on those cozy socks, light a candle, and enjoy one of these recommendations:

“I first encountered True North when a copy of it landed in the AMC Library & Archives years ago. It’s a classic memoir of a man who felt so run down by the prospect of riding the train to and from the office, being bound to his desk for all eternity, that he made a great escape to the remote and unforgiving wilds of Labrador, Canada. Adventure, misadventure, evocative descriptions of the land and its people; this book has it all. The first chapter especially will make you want to head for the hills. As Merrick says of his escape: ‘One muggy night just before a thunderstorm, I sat up in bed and hammered my fist on the wall and screamed in my mind, I’m getting out. And I got out.’”

Grandma Gatewood’s Walk: The Inspiring Story of the Woman Who Saved the Appalachian Trail

“I spotted this book at the Highland Center when we were in Crawford Notch for a hike. I had never heard the story, got it on CD, listened during my commute, and was riveted. Emma Gatewood was 67 years old when she set out on the Appalachian Trail, telling no one. Though we might consider her ill prepared—she carried a drawstring sack, but no tent, and hiked in sneakers—she nevertheless completed the trail on her second try, having averaged 14 miles a day. She had hiked through storms, slept in the open, and crossed [Maine’s] Kennebec River in a flood. Through interviews and research, the author reveals what she had endured in her earlier life, and what compelled her to hike. The result is a portrait of a woman taking control of her life.”

“The book is a memoir of the author’s journey to find connection with her ancestors, parents, and the American landscape as a whole. One reason why I really love it is because the author is an environmental scientist and connects geology to her travels across the country. As an environmental scientist and an avid geology enthusiast, I can really connect to that! One of my favorite parts of the book is a chapter titled ‘What’s in a Name’ where the author dives into place names in the U.S. and ties many of them back to Indigenous names, or anglicized versions of those names. It was really eye-opening to realize how many place names I’ve heard all my life have a history of colonialism and erasure of Indigenous history.”

“Derrick’s comedy background gives a fresh and hilarious take on hiking the Appalachian Trail, especially as he encounters the everyday trail tasks of camping, cooking food, and searching for wildlife. (His never-ending goal to see a moose is especially relatable for hikers like me who have yet to see one.) Lugo’s optimism as he navigates his journey from barely setting foot in the wild to months on the AT is inspiring for anyone who has ever dreamed of hiking the trail. This is a must-read!”

“The book is the story of the first winter ascent of Denali in January 1967 as told by one of the participants. It is the harrowing and brutally honest story of an eight-man team that was insufficiently experienced for such an expedition—at least one member of the team had no climbing experience. They were beset by problems from the beginning, including the early death of their strongest member in a fall into a crevasse. The three-man summit team was caught in a severe storm on the descent and spent six days in a tiny ice cave in conditions that are almost impossible to imagine. When they were finally able to descend, they found the rest of their party had left them for dead. I’ve read a lot of outdoor adventure books and can’t remember one that better conveyed the human capacity for endurance under extreme circumstances.”

“I was lucky enough to visit my daughter while she was studying in Kenya. She recommended the book as a good read while I was there. Wangari describes the path of her life, the environmental movement she started by unraveling the challenges of replanting Kenya’s forests, and working with Kenyans’ to see the future in restoring important natural resources. She goes on to clash with the Kenyan government in her quest to restore democracy to her country. Wangari was awarded the Nobel Peace Prize for her achievements.

Visiting the landscapes that Wangari describes in the book and getting to walk through forest plantings she inspired was a thrill for me that goes deep. Wangari truly exhibits that the power of one can change the world. From inspiring replanting of Kenyan forests to standing up for human rights and democracy, her story reminds me to never give up and that environmental movements start close to the ground.”

On Trails: An Exploration

“I came across Robert Moor’s On Trails in the ‘best reads’ section of Longfellow Books—a great local bookstore in Portland, Maine. I had just completed my Appalachian Trail thru-hike months before so needless to say the title perked my interest as a way to escape down memory lane to long days spent walking in the woods.

On Trails is a multifaceted study of trails, their role in the natural world, and why we as humans find ourselves so drawn to them. Over a series of vignettes, Moore introduces us to characters that have found deep connection with trails and adds his own personal anecdotes to the mix. It’s a delightful read with tremendously insightful and philosophical musings that occupy the mind for days after you’ve put the book down.

I would highly recommend this book for anyone who enjoys hiking, the study of the natural world, or philosophy—it will take you places.”