Put the business end of the Therapik on an offending mosquito bite and push the button. A nine-volt battery delivers focused heat to the targeted area. The chemicals causing the itch are neutralized after 30 to 60 seconds of applied heat due to the fact that most insect venom is “thermolabile,” or sensitive to heat. That’s the premise of this inexpensive ($12.95), lightweight (4 ounces), and very clunky-looking gadget. 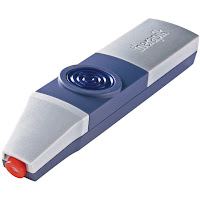 Normally I would immediately relegate such a product to the dustbin of mosquito repellent and bite treatment myths. Except that it seems to work. Reviews seem to confirm this surprising fact from sources as diverse as Gizmodo (“we can’t believe this actually works”); customer reviews at Wal-Mart and Mountain Equipment Co-op; and the ABC daytime show The Doctors. It’s even FDA-approved “to provide temporary relief of the pain and itching from insect stings and bites.”

To use the Therapik, you place the red point of the device directly on the bite and push the single large button to begin delivering focused heat. Hold it in place for at least 30 seconds, or as long as 60 seconds. Supposedly the longer you apply heat, the more effective it is, though reviews indicate that it starts to become uncomfortably hot after around 30 seconds (though never hot enough to actually cause a burn).

The Therapik’s compact size and light weight make it a viable option for most outdoor adventures. And it’s not just for mosquito bites evidently. According to the company’s home page, “Therapik’s patented technology delivers heat in the specific temperature range necessary to neutralize the venom from over 20,000 different species of insects and sea creatures.” These include, apparently, hornets, bees, fire ants, and jellyfish.

Now first of all, who knew there were more than 20,000 creatures on the planet that could bite or sting you. And second of all, you’ve got be kidding. But at least when it comes to common biting insects—including greenheads, chiggers, no-see-ums, and especially mosquitoes—investing in a Therapik may very well be a worthwhile purchase.

Learn more about keeping the bugs at bay: