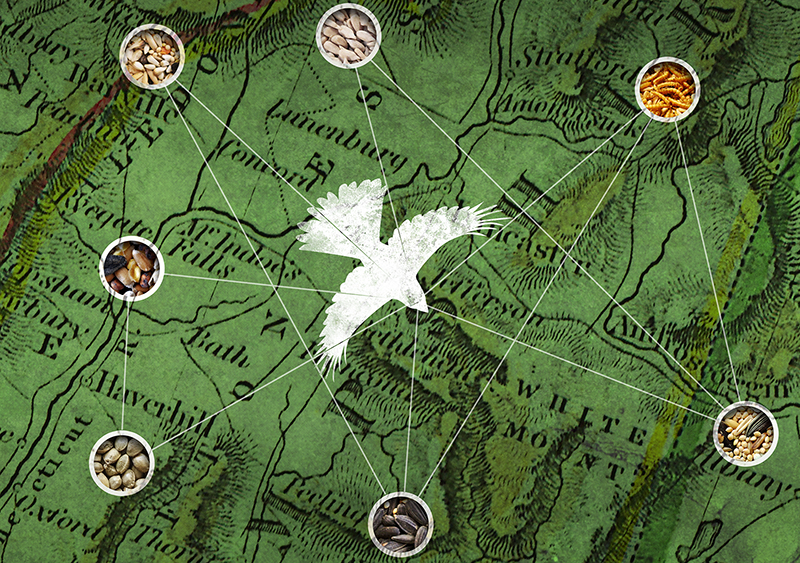 S.H. LeeHave you wondered how animals find food in winter? Many critters hoard meals for when nature’s pantry is sparse.

You probably know squirrels bury nuts to eat another day. But did you realize other animals store food to help them through lean times?

“It blows people away how many animals cache food,” says Kent McFarland, a conservation biologist and cofounder of the Vermont Center for Ecostudies. “It’s another strategy to make it through the long winter.”

Chipmunks, beavers, blue jays, ravens, and Canada jays are just some of the creatures that store food to eat later—called hoarding, or caching. While animals usually cache to prepare for future scarcity, they also do so to save food for a day or two or even to let fruits ripen.

Some animals, like beavers, store food in large amounts in a single location, called a larder. Others hide individual food items in different locations—a process known as “scatter hoarding” or “scatter caching.” Think squirrels and acorns.

FULL PANTRIES
Most of this pantry-stocking happens during the fall, and each species does it a bit differently. Beavers build underwater larders out of poplar, willow, and other branches near their lodges to eat once the ponds freeze.

Red squirrels cache red spruce cones in large piles called middens and hang mushrooms from tree branches to dry. Meanwhile, birds make “bazillions” of trips to hide seeds in crevices of trees, McFarland says. Some estimates suggest a single chickadee will have as many as 10,000 caches.

While birds cache food for winter, they also can be cached themselves. McFarland says snowshoe hares are known to kill chicks and adult birds and store them to eat later. And when radio-tracking Bicknell’s thrush for a study one summer, McFarland discovered the mountain-loving birds buried in shallow graves on two separate occasions. “It looked like it was probably weasels that nailed them at night and cached them” to eat soon after, he says.

BIRD BRAINS
Birds that store food are expert sleuths when it comes to finding their own caches, a trait that may stem from an evolutionary advantage. Studies suggest they have an enlarged hippocampus, the part of the brain connected to memory, McFarland says. Even more fascinating, “Chickadees can grow and shrink their brains each year to remember where the caches are,” he says. A chickadee’s hippocampus expands by 30 percent in the fall, when the bird is caching, and stays enlarged until spring, when it no longer needs to find hidden food.

This seasonal brain growth may prove especially handy, given that birds do not have as strong a sense of smell as squirrels—which are known to raid bird caches.

SPOILER ALERT
Still, climate change may be causing difficulties among some caching species. Consider the Canada jay (also known as the gray jay): The bird stores insects, fruit, and seeds after first coating food with its saliva, which has an antibacterial property that helps prevent rotting. Since Canada jays usually breed when there’s still snow on the ground, they rely on their stored food to survive and to feed their young. But as Earth warms and average winter temperatures rise, the Canada jay’s food is more frequently spoiling before spring.

“Their refrigerator’s failing,” McFarland says. He isn’t sure how or if the birds will adapt. “If they can’t keep their cache cool, they can’t just go out and buy a new one.” 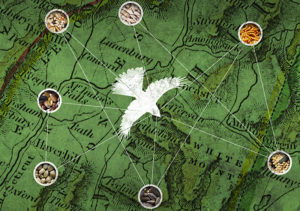