Too Cold: The Death of Kate Matrosova 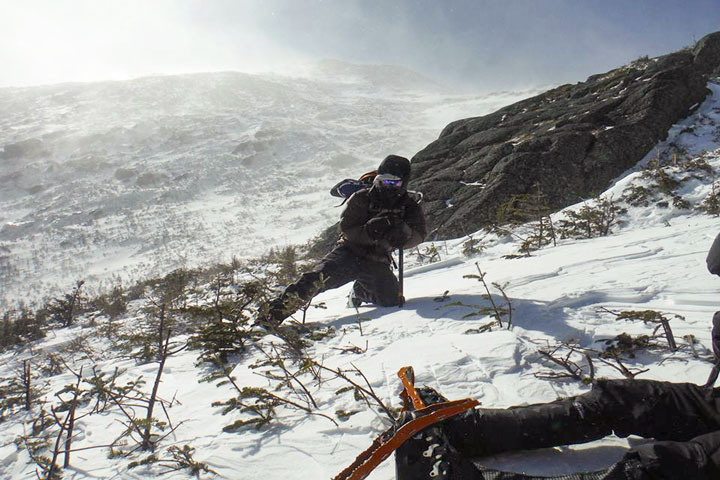 Mike CherimTwo rescuers, one kneeling, the other’s leg showing, work to recover the body of Kate Matrosova (out of frame), who was found between Mount Adams and the Madison Spring Hut, off the Star Lake Trail.


This is a love story. Its background contains a wife and husband; its foreground features a woman and mountains across the world. Even as Shakespeare and life remind us that love stories do not always end happily, love’s spirit still suffuses this one, makes us want to know it. it may seem odd to begin parsing a tragedy by talking about love, but with- out some sense of Kate Matrosova’s passion, this story becomes too simple, becomes simply a record of error that can be recounted and tutted about. It is more than that.

Sometime on February 15 or 16, 2015, New York City resident and Banque Nationale de Paris Paribas trader Kate Matrosova froze to death near Star Lake between New Hampshire’s Mounts Madison and Adams. Her death was all over the news; its starkness drew the eye, engaged the heart. At age 32, she was, by all reports, mountain-experienced, though that experience was concentrated within the last few years, and she was fit and equipped for winter. But not, it turned out, for what blew through the White Mountains during her final 48 hours. Can one be “equipped” for winds near 80 mph and temperatures of –30 degrees Fahrenheit? The estimated windchill on nearby Mount Washington had dropped to nearly –80 degrees F; the ground blizzard of snow must have been impenetrable. A YouTube clip of searchers crossing the slopes of Mount Adams shows two of them simply blown over like cutout figures at an amusement park shooting gallery.

Why, so many wondered, walk up into such extremes? All of us who press out into the mountains’ elemental world know its lure. There, at distance from the channeled forces that heat and light our houses and apartments, that drive our devices and their synthesized worlds, we find our old selves brought forward from a million years of evolution, which is another name for experience. “Are you experienced?” asked Jimi Hendrix in his short life. “Yes,” say our ancient selves, “yes, we are.” or we want to be.

Twinned with this drive is our need for recognition—from others, yes, but often most centrally from ourselves. In Western culture, this need often takes on a solo cast; we want to be seen and see ourselves as singular, as distinct and distinctive, and achievement seems the best route: “Whoa,” we like to hear, “Did you hear that? Who is she? How did he do that?” it begins early in the home or on the playground and rarely goes away. Who doesn’t want to be “bad-ass,” if only for a short time?

Mix in the mountains, even the ground-down molars of our new England Appalachians, and the weather they breed. For the last 300 years, after our highlands shifted finally from being home to the gods to being no one’s home at all, mountain-drawn folk have found a sort of distinction there. First, there was the challenge of peaks unclimbed; once they’d been climbed, it became routes deemed unclimbable or weather judged too severe. See, for example, the media flurry around January 2015’s “free climb” of El Capitan’s Dawn Wall, the generally acknowledged “hardest rock-climb in the world.” supported by years of practice and planning and liberal rope-hauled supplies, Tommy Caldwell and Kevin Jorgeson’s exploit was filmed and blogged and, yes, tweeted throughout its 19 days. The climb drew long eyes—the thicket of cameras in the meadow below pointed aloft like cannons. Can they do it? Will they break the wall, or will it break them? Will they stay together? Will one fly and the other fall? Caldwell and Jorgeson were “out there,” remarkable. Climbing free of what holds the rest of us in our chairs and jobs and various forms of predictable inertia.

Before this, we riveted our attention on and sometimes glorified the young Alexander Supertramp, a.k.a. Chris McCandless, whose story Jon Krakauer told in Into the Wild. Until his mysterious death, he too wanted to free climb though life, defy its gravity.

That, I think, is part of the appeal. You pack up the little town that goes on your back; you step from the lot where people park their cars and their usual lives; you slip between two trees, free for some elemental time in this oldest world. You go up, where divinity once lived, where your hoped-for new self can emerge.

Kate Matrosova was part of that tribe. She would go up—in a grueling daily training regimen on the steps of New York City buildings and to the summits of Kilimanjaro, Elbrus, Aconcagua, and Denali, and she hoped eventually to reach the summits of all seven continents. Over the years that stretched ahead, who knows how many other mountains she would have climbed? Ferociously fit and able to endure what many cannot, Matrosova was in the first flush of a passion for the hills.

As Chip Brown’s sharp-eyed April 2015 essay for Bloomberg News makes clear, Matrosova’s capacity for passion drove her training—she trained at levels most can’t reach—and kept leading up. Tragically, on those two February days, her passion met weather more turbulent, more driven than she could master. But before we think more about this unhappy meeting, we need to climb the essential details to it, to arrive at the meeting of climber and storm.

By the time she reached the Whites that weekend, Kate Matrosova had already compressed a lifetime of movement into her 32 years. Born into meager circumstances in Omsk, Siberia, she showed drive throughout her childhood and gained entrance to Omsk State Transport University, where she studied finance. At age 20, Matrosova secured a student work visa and flew to the United States where, over the next decade, she transformed herself into an astute financial analyst and remarkable athlete. With a magna cum laude BA from DePaul University, where she studied finance, marketing, and accounting, and a master’s from the University of California, Berkeley, in financial engineering, Matrosova climbed quickly to levels of accomplishment most see only from a distance. Those she met and those she worked with were drawn to her zest for life and awed by her abilities and drive. In his Bloomberg article, Brown quoted a research partner, Li Sun, a PhD physicist who now works for Morgan Stanley. He said that Matrosova “was an adventurer, but I don’t think she was a risk-seeker. She wanted to know different things, achieve different things, get to different places. It wasn’t about risk. It was about achievement.”

And so, as part of her upward training, Matrosova and her husband, Charlie Farhoodi, arrived in the winter Whites in mid-February. On the 15th, she planned to climb over and through a Northern Presidential traverse in alpine style—quick and light over its four summits and 16 miles, beginning on Mount  Madison  before  dawn,  climbing  then  over  Mounts  Adams and Jefferson, and dropping down from Mount Washington along the Ammonoosuc Ravine Trail as dusk came on. It was an ambitious itinerary. In the face of an extreme forecast, speed would be essential; Matrosova expected to be up and down before it got too tough.

Still, that forecast continues to give many pause. Surely the nearby Mount Washington observatory was explicit in its predictions for uninhabitable cold and wind, as were other forecasters: the coming weather would be the toughest of an already notable winter. Digesting the observatory forecast, the Mount Washington Avalanche Center’s snow Ranger Jeff Lane put it this way in his February 15 comment:

Mount Washington will truly be putting on a show today and tomorrow. Its well-earned reputation for harsh winter weather will be on display, and I’d recommend taking a seat away from the action for this show. . . . Temperatures will be falling today, reaching – 35 degrees F (–37 degrees C) on the summit overnight. During this time, wind speeds will be rising quickly up to the 100 mph (161 kph) mark, with gusts possibly reaching 125 mph (201 kph). These conditions are not to be taken lightly. I encourage you to be judicious in your choice of adventure today. Even if your plan is to stay well below treeline today, bring plenty of warm clothes and extra food and water.

There is a measured, laconic quality to Lane’s sentences, even as its figures are eye-catchingly extreme. But Lane, deeply experienced, writes from the point of view of someone who has seen all of this before and knows what to make of it.

As veteran mountaineer and rescuer Rick Wilcox pointed out in an interview after the tragedy, there are two ways to approach the mountains: heavy and slow or light and fast. The first is a geared-up, full-pack style reminiscent of the siege method of early high climbing. The second is a stripped-down, bare-essentials quickness close in spirit to trail-running. When fully equipped, you carry civilization’s core with you—shelter, fire in some form, fuel, clothing—all in service of providing and protecting your elemental heat; the quick-footed climber leaves some of those behind and so depends on not being stopped.

Well below treeline, Mount Madison’s Valley Way eases into the woods over gentle contours for its early mile, and Matrosova must have made rapid headway from her 5 a.m. departure. After training on stairs and in stairwells, at times with a 60-pound pack, the liberation of real trails and light weight must have felt grand. And the boot track of this usual way into the Northern Presidentials would have made for good walking.

Matrosova was alone in two ways: she and her husband had agreed he would stay in the valley and be the day’s driver. Although Farhoodi enjoyed “being drawn along in her wake,” he was not an aspiring mountaineer; that was her goal. In addition, the day’s cold forecast made it unlikely that she’d meet others on these north- or cold-weather-facing slopes. Still, I’m guessing Matrosova did not feel lonely as she climbed. There is a snug economy to being outfitted for and moving at the right speed through intense cold, where the little engine of your body is kicking out heat and your layered clothes are managing that heat efficiently. From such economy comes pleasure and confidence, a sort of mental fuel and companionship of self.

For reasons unknown and unknowable, Matrosova’s ascent slowed as the morning wore on and she summited Mount Madison, then dropped down to the col between it and Mount Adams …