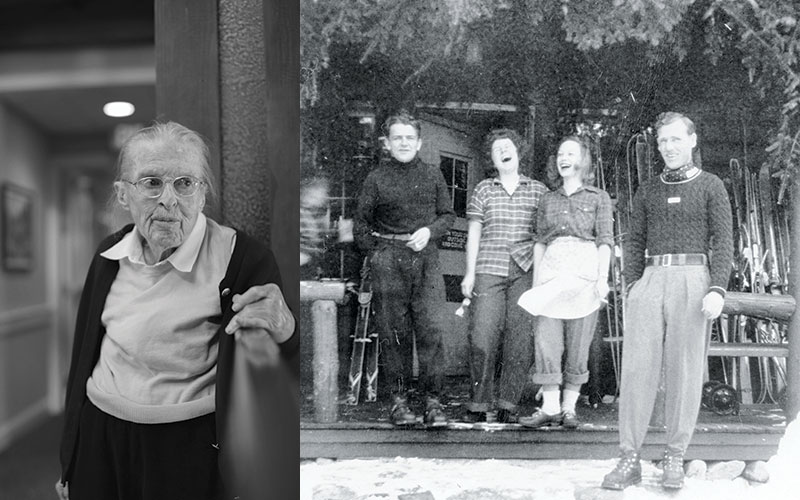 Since AMC opened its first hut in New Hampshire’s White Mountains in 1888, staff members (a.k.a. “croo”) have had the reputation of being tough and resourceful—perhaps none more so than those who reported to Joe Dodge. Working in Greenleaf Hut or Pinkham Notch under the watchful eye of AMC’s legendary hutmaster in the first half of the 20th century thickened one’s skin pretty quick.

And if you were a woman on croo, well, that was nearly unheard of. “The guys didn’t like that at all,” says Barbara Hull Richardson, eyes twinkling. “They felt I was invading their territory.”

Now 95 and living in a retirement community in Keene, N.H., Richardson is only five years younger than the federal designation of the White Mountain National Forest, in 1918. She’s slight in stature but high in energy, as she must have been in 1943, when she was hired as one of AMC’s original “hut girls,” as female staff were then known. With the men off to war, Dodge was struggling to fill positions. Pinkham Notch—the lodge and visitor center at the base of Mount Washington, later renamed in his honor—needed someone to run the front desk.

When Dodge picked Richardson, a 20-year-old on summer break from Bryn Mawr College, she became one of the first women to crack the male-dominated hut system. The youngest croo member of the season took the lessons learned in the notch and went on to become a lifelong social worker and a decorated state representative.

As for toughness? It was a little more than a year after her summer with AMC when Richardson had the accident that changed her life. But getting shot will do that to you.

For her 22nd birthday, Richardson had gone to visit family in her hometown of Waverly, Pa., a farm community north of Scranton. She was celebrating with a pregnant friend, and the two of them decided to take a walk around a nearby lake. Coming off Richardson’s recent stint at Pinkham Notch, a few miles of flat hiking would barely cause her to break a sweat, but she was concerned about her friend’s stamina. The two women had sat down on a log to rest when they noticed a couple of town boys on the other side of the pond, shooting tin cans floating in the water.

Next thing Richardson knew, she was lying on the ground. “A bullet had ricocheted and hit me and knocked me off that log,” she recalls. “Well, I just got right back up. I didn’t really think it was too serious.”

Her friend hoofed it back into town to get a doctor, a luxury Waverly hadn’t had until two weeks earlier. “I just watched his face turn white,” Richardson says. “He put me in his car and we raced to Scranton Hospital at 60 miles per hour, which was pretty fast back then.” Richardson was surprised to find a priest waiting for them at the hospital; he began delivering her last rites. She laughs now at the memory. “I told him, ‘But I’m not Catholic!’”

Turns out the bullet had missed her heart by a mere quarter inch—so close the doctors weren’t able to remove all of the shrapnel. “I had a recent X-ray that showed there’s still some pieces of that bullet in me,” she says, smiling. She has carried that life-changing day in her chest for 75 years.

Looking back, Richardson credits those two experiences—first breaking glass ceilings within AMC then surviving a near-death close call—with directing the path of service her life would take. “I realized I was so lucky, I had to do something with my life,” she says. “I decided that would be to help people.” She takes a deep breath, gets quiet for moment, then says, “We should all be doing that.”

Since 2012, Richardson has lived in a cozy, book-lined apartment at Bentley Commons, a retirement home in Keene that once was a pail-manufacturing mill.

“Best place to kick the bucket,” she quips.

Over the reading chair in her sitting room hangs a portrait of Robert Frost. Books from Sinclair Lewis, Diane Ackerman, and Grace Paley peek out from under piles of paperwork, newspapers, and notebooks. On her walls are dozens of citations and awards of appreciation, including a commendation she received from Gov. John Lynch when she retired in 2010 from the New Hampshire State House.

Above her bed and along her walls are paintings of horses and meadows by an artist friend. Down a long hall are photos of Richardson and her family through the years. Everything in her apartment speaks to motion and movement—fitting for a woman whose whole life, from her days of making sandwiches at Pinkham Notch to her current hobby of writing political op-eds for The Keene Sentinel, has been devoted to helping those around her.

Not too long after the incident at the pond, Richardson married Elmer, a World War II B-17 pilot who had flown 25 missions. Richardson’s brother had helped Elmer study for his Air Force exams. “Elmer was going with this girl, but she fell in love with my brother,” Richardson recalls. “Elmer was still invited to their engagement party, and after, I had to get a ride back to Boston, and he tried to impress me by making some phone calls and getting me on a flight. It didn’t work.”

They ended up driving, and the ride was enough for Elmer to ask if he could call on Richardson again. She said yes. In the first few years of their marriage, the two moved around New England for Elmer’s work as a sales manager with a ball bearing company. When they settled in the Richmond and Fitzwilliam area of New Hampshire, Richardson was determined to keep the promise she had made to herself years earlier, of pursuing a life of service.

“I remember having to get my courage up to ask my husband if I could take a job,” she says. “Back then, with all my friends, it was the men that worked.” Elmer came around, and Richardson began a career in social work.

She wrote grants for nonprofits; founded Project Share, a donation-based organization that collected furniture for low-income families; and served as a longtime social worker for Court Appointed Special Advocates of New Hampshire. “Nothing that we do is inconsequential,” she says. “Even if it’s just doing laundry for hikers.”

Richardson’s job at Pinkham Notch wasn’t terribly specific. Although Dodge hired her to work the front desk, like most croo then and now, she was a Jill-of-all-trades. “I did some office management and bookings,” she says. “I made lunches, assigned rooms, cleaned rooms, and washed the toilets. Of course, everybody had to work hard.”

She remembers overloading a washing machine, being called away, and returning to face a flooded laundry room. She also recalls a male visitor who arrived late in the day, looking for a bed. Richardson accidentally booked him into a bunkroom already occupied by three young women. “We fixed it, of course, but that didn’t go over well with him,” she says. “He left very early the next morning without a word.”

Working in the mountains, Richardson was aware of a bias against women but tried to keep her head down and prove she could do it. She had the support of her grandfather, who insisted girls and boys be treated equally. “He’s the one who encouraged me to look for work,” she says. “That’s how I got the hut job to begin with, by believing I could.”

Dodge made upending the status quo easier. He didn’t care what your gender was, Richardson says, as long as you did the job you were hired to do. “Everyone liked him,” she recalls. “He was very friendly and approachable.”

During her free time, Richardson would hike. That summer was her first significant exposure to the White Mountains, and she surmises that she visited all seven of AMC’s then-huts, in addition to summiting Mount Washington several times. She was so smitten, she returned that winter to ski the sheer backcountry slopes of Tuckerman Ravine.

“I spent a week back there, skiing,” she says. “I don’t recall if I climbed all the way or not, but there weren’t too many other women doing that. I had become quite a tomboy.”

As the years passed, Richardson continued to hike. When work and family kept her close to home, she frequented southern New Hampshire’s Mount Monadnock, although she still dreamed big. “I always had it in my mind that I would someday hike the Appalachian Trail,” she says. “But I ran out of time.”

She did pass on her love of the outdoors and of service to her children. One daughter became a competitive equestrian; another lives off-the-grid in Vermont; a third works on safe shipping and oil-spill-prevention in Washington State. “I wanted them all to find their own passion,” Richardson says.

Even as her kids grew up and had kids who then had kids of their own, Richardson fed her trailblazing spirit first kindled in Pinkham Notch. In her late 60s, she launched yet another campaign: to become a New Hampshire state representative.

Like many episodes in Richardson’s life, her decision to enter the world of politics grew out of a sense that, in order to get things done, she’d have to do them herself.

In 1991 she reached out to her New Hampshire state rep. “I don’t even remember the issue, but when I talked to him, he acted like he was on my side,” she says. “When the vote happened, it turned out he wasn’t. So I decided to run.”

At 68, Richardson got a map, put on comfortable shoes, and began knocking on doors—every door in her district. “As soon as they found out I wasn’t proselytizing or selling something, people were nice,” she says. “I learned a lot.”

She won and kept on winning, serving nine terms until deciding to retire at age 87. During her time in the state house, she attached her name to a swath of progressive policies. A vegetarian for half her life, she was an early proponent of environmental protections and also worked, ultimately unsuccessfully, to repeal the death penalty in New Hampshire. Her proudest moment came at the end of her career when, in 2010, she helped pass the bill that allowed same-sex couples to marry. “That was a big deal to me and to our state,” she says.

Since retiring from public life, Richardson has kept a close eye on the women in her wake. “I think it’s wonderful to see people are finally coming out and fighting,” she says of the #MeToo movement. “Back then, we dealt with harassment and worse all the time, but it was just how it was.”

While many of her own peers may have felt they had to keep a low profile, Richardson’s advice to women today is just the opposite. “This has to come out now, voicing your opinion,” she says. “Do what you want to do in life.”

From coed croo member in a world of men to social worker to progressive politician, Richardson has been scaling heights since she first set foot in the White Mountains. Through it all, one lesson has been the most important.

“Honor yourself,” she says. “If you don’t love yourself, how can you love anyone else?”