A Conversation with Bryon Powell of iRunFar (Part 1) 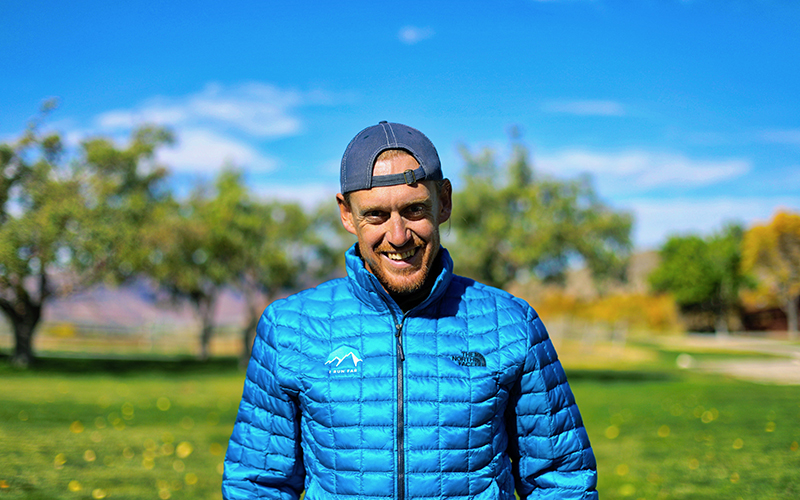 A decade ago, Bryon Powell made the physical and figurative leap from a law firm in Washington, D.C., to blogging about trail and ultra running from the southwestern U.S. His site, iRunFar.com, has since grown into one of the major voices in a sport that has exploded in popularity over the same period. I knew Powell long before all of that. The two of us ran track and cross country together at Haverford College and even spent a summer training on the endless dirt roads of northern Nevada’s high desert. It’s no surprise he ended up back out west, though he’s often on the road, covering or competing in an event in a far corner of the world.

This is the first in a two-part conversation, divided roughly between Powell’s personal running experiences and his thoughts on the larger trail running world. Read Part 2 of the interview here.

Running Wild: When and how did you become interested in running?

Bryon Powell: My next-door neighbors growing up were runners, so I saw people going out running every day in my neighborhood. When I wasn’t sure I’d get any playing time on the freshman soccer team in high school, I still wanted to do a sport. I thought, “Eh, might as well try this running thing.”

RW: When did you become aware of trail running?

BP: Fortunately, my first real cross country and track coach was a huge trail runner. I grew up in New Jersey with a forested state park [editor’s note: Washington Crossing State Park] right behind my parents’ house. My coach would swing by on the weekends and we’d go for a run. And he called it “trail running.” Trail running was a thing.

RW: Many of us who started running in high school and college started with cross country—do you consider that the same sport as trail running?

BP: Running is great in that there’s so many gradations. It’s different flavors of the same thing, but very much not the same thing. I think running cross country prepares one really well for the unevenness of the ground and the physical adaptations [necessary to] make one strong as a trail runner. In the fact that it’s uneven and engaging in that way, they’re similar, but generally I would consider them two different disciplines in the same sport.

RW: What are your favorite spots to run back in New Jersey?

BP: The amazing thing is I did 98 percent of my trail running there behind my parents’ house. That first coach [also] took me up to the Delaware Water Gap a few times, on the New Jersey side, and I remember going up around the Appalachian Trail—the really rugged, bouldery trails and upland lakes and blueberries—and just getting a taste for that. So that was cool. And then there was Morristown Jockey Hollow a little further south. Just a great trail system there.

RW: Do you think there was a point where your identity changed from “runner” to “trail runner?

BP: No. There have been times when I’ve been tempted to say that, but in reality, most of us don’t live right next to a trail. We might run to a trail, but in winter or in the mornings when we’re trying to get a run in, we’re on the roads. I firmly identify myself as a runner who really enjoys trail running and ultra marathons. Now, at times, may I have identified differently? Yes. I’ve always loved the act of running and at this point, doing so on trails and in nature and in the wild is my favorite way to express that. But, yeah—I’m a runner.

RW: You’ve run all over the world so it almost seems funny to ask you about state forests in New Jersey when you’ve been to all these places…

BP: But it’s not. I’m going to cut you off right there because it’s not. I have run all over the world and I’ve run in iconic trail running and hiking destinations—and to this day, what I think of as trail running and what I love to do is go back to central New Jersey and run in Washington Crossing State Park. It just makes me beam with sentimentality, with enjoyment of the trails. It’s one of the trail systems I most intimately know, and I’ll be going back for Thanksgiving, and I love the hell out of it.

RW: How would you characterize the trail running in the Northeast and Mid-Atlantic?

BP: The Northeastern U.S. is definitely known for being, mile for mile, very challenging. It doesn’t have to have the biggest mountains: The trails are steep and they’re bouldery and they’re leaf covered and they’re wet. It’s great because you get that challenge and intensity in a lot of places, but you can also find more tranquil trails. But in terms of identity, it’s definitely rocky, steep, and challenging. Which is a very distinct identity because not all trail systems are like that.

RW: What are some of the New England and Mid-Atlantic areas you’d like to run, but never have?

BP: There’s lots of places. I’d love to go to Acadia. Just exploring the Adirondacks would be awesome. I’ve never done the Presi Traverse, or even been up Mount Washington. [Maine’s] 100-Mile Wilderness—I’ve known a lot of people who have thru-hiked or run the AT and that place is often mentioned by name as a distinct challenge. I would love to be able to match my mental picture with what it actually looks like there. But really, I dream of being back in New England in Autumn. I don’t know if people realize how spectacular the Northeastern autumns are.

RW: What makes a “good” trail run for you? Does that differ from a “good” run when you were running college track?

BP: For me, running has transformed from a competitive endeavor to a means of exploration. It’s not about how fast I go [but] whatever that comfortable effort is, I can do that as long as I want and keep exploring. And I don’t find it inherently better than going out and hiking, but I love that I can go out for a 20- or 30-mile day, back into remote backcountry or even wilderness and see that in a day when I don’t necessarily have the ability to take off for three days to do a backpacking adventure. Right now I’m in the San Juan Mountains of Colorado and that beauty is very apparent, but that beauty exists in any trail system. It’s something that connects me with nature, I guess.

RW: Do you prefer running alone or in a group?

BP: I guess from living rurally, I’ve come to really embrace running alone. I do that a vast majority of the days, but I do miss running with people. Running with people is great because the time goes by whether or not you’re talking. And you’re sharing the beauty of nature. But I also like the freedom [of running alone]. Yesterday I was out and just took in the views I wanted to and took the photos I wanted to. I kind of really enjoy both, but I definitely spend more time running alone and have come to peace with that.

RW: You occasionally post photos on Strava of arrowheads you find on your runs (and always note that you leave them where you found them). I’m amazed how many tiny things like that you’re able to spot.

BP: Yeah! It’s funny because I didn’t for decades, but being around Moab, where I live most of the time, I kept looking and I’d pick up pieces of chipped flint all the time. Eventually you just recognize patterns, and being out often in nature helps me see that arrowhead or that cool crystal on the ground, or hey, there’s a northern pygmy owl over in that little apricot tree and it’s 3 inches tall and 70 yards away. If you’re out and immerse yourself in nature you pick up what’s different.

RW: What do you carry in your pack?

BP: This time of year, some sort of really light wind jacket. If there’s a chance of cold rain, I’ll have a rain jacket in there. I like having a half-Buff, a little headband. I always wear a running cap, but that allows for a little extra warmth. Right now there’s the Katadyn Befree, it’s a little 600 milliliter soft flask with a filter in it, so any place there’s water I can just scoop up some water and sip from it and have an endless supply of water, which has been a game changer. Usually a couple gels. I rarely eat when I run, but just as a backup in case I feel very bad, because those days happen. And my iPhone, because the best camera is the one you have with you.

RW: You left a legal career to start working on iRunFar full-time. What made that move seem feasible?

BP: It didn’t seem feasible. When I quit my job I had one $100-a-month coaching client and that was my only revenue. I just said, “I’m going to try this for a year, if it absolutely can’t work, I’ll quit. If at the end of two years it doesn’t look like it’s going to become sustainable, I’ll stop and do something else.” Fortunately at every interim measuring point, things were moving in the right direction and I stuck with it.

RW: Why’d you make such a radical career change?

BP: It was internal. I’d had a personal running blog for ages and I really enjoyed writing on that and sharing my running experiences with others. And I was not personally satisfied as an attorney. That’s not that uncommon a scenario. I just wasn’t enjoying the work I was doing. It caused a lot of stress and anxiety—and I really loved running. So I decided, “Heck, I’m going to give this a go.”