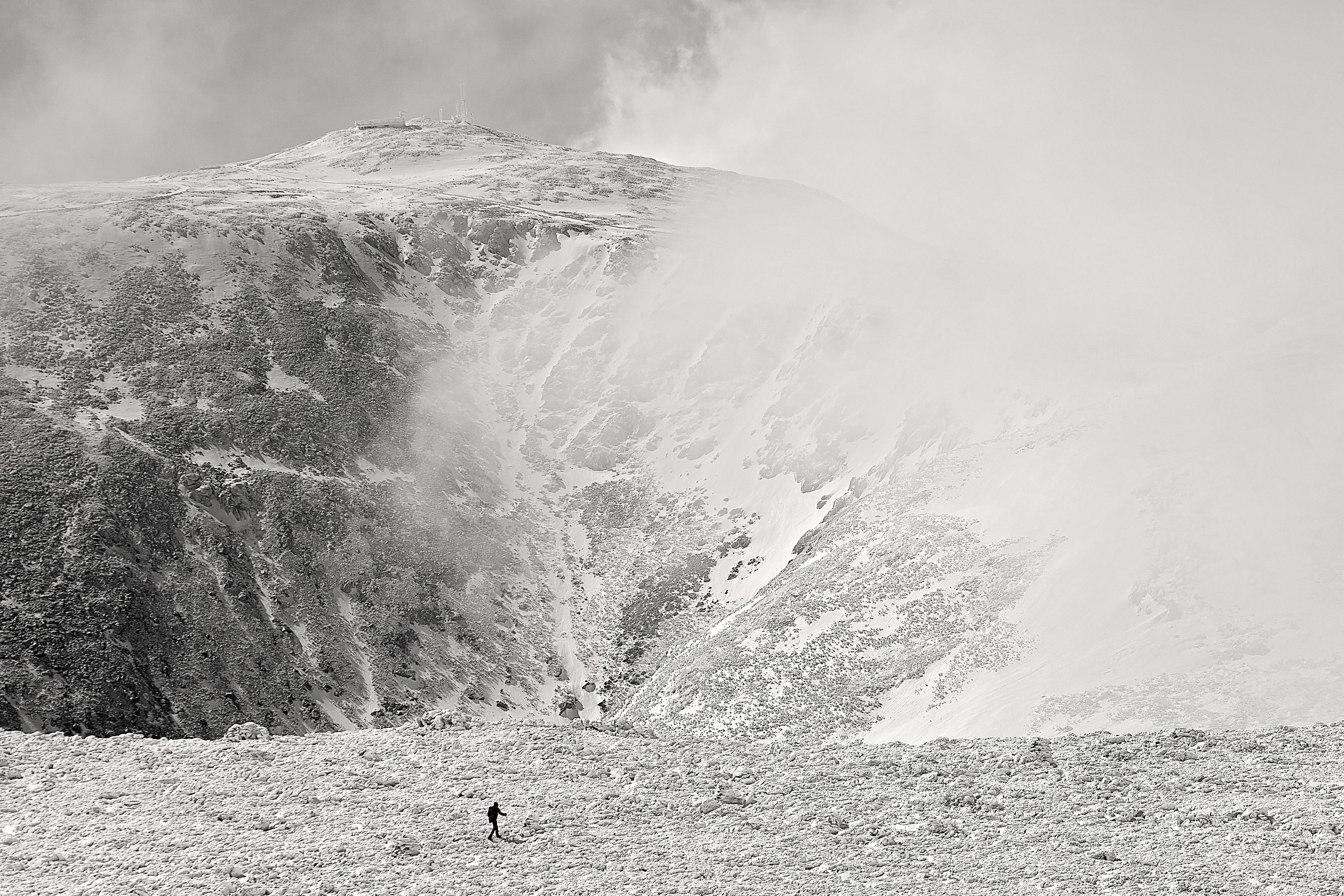 Peakbagging is the concept in which hikers and climbers attempt to reach a specific set of summits as defined by a list or a set of criteria. Some peakbaggers, known as “highpointers,” try to reach the highest point in every state, country, continent, or national park, while other peakbaggers attempt to climb all summits over a certain elevation threshold in an area. Peakbagging has been popularized around the world – some of the most notable lists include the 14,000-foot peaks of Colorado, the 8,000-meter peaks of the world, and the 4,000-foot peaks of New Hampshire.

The New Hampshire 4,000-footer list was created as a way for hikers to explore new areas of the White Mountains – a goal that thousands of people have completed throughout the course of their lifetimes. The original list was made in 1931 by Nathaniel L. Goodrich, a librarian at Dartmouth College, a mountaineering enthusiast, and a renowned AMC trailman. In the December 1931 issue of Appalachia, Goodrich proposed a list of 36 White Mountain 4,000-footers that he had climbed. The criteria that he used for putting together his list was that each peak must achieve a 300-foot topographic prominence, though Goodrich admitted that this 300-foot benchmark was arbitrary. In other words, each peak must rise 300 feet above any ridge connecting it with a higher 4,000-foot neighbor. A peak could be over 4,000 feet in elevation, but if the prominence was not at least 300 feet, the peak did not officially count. 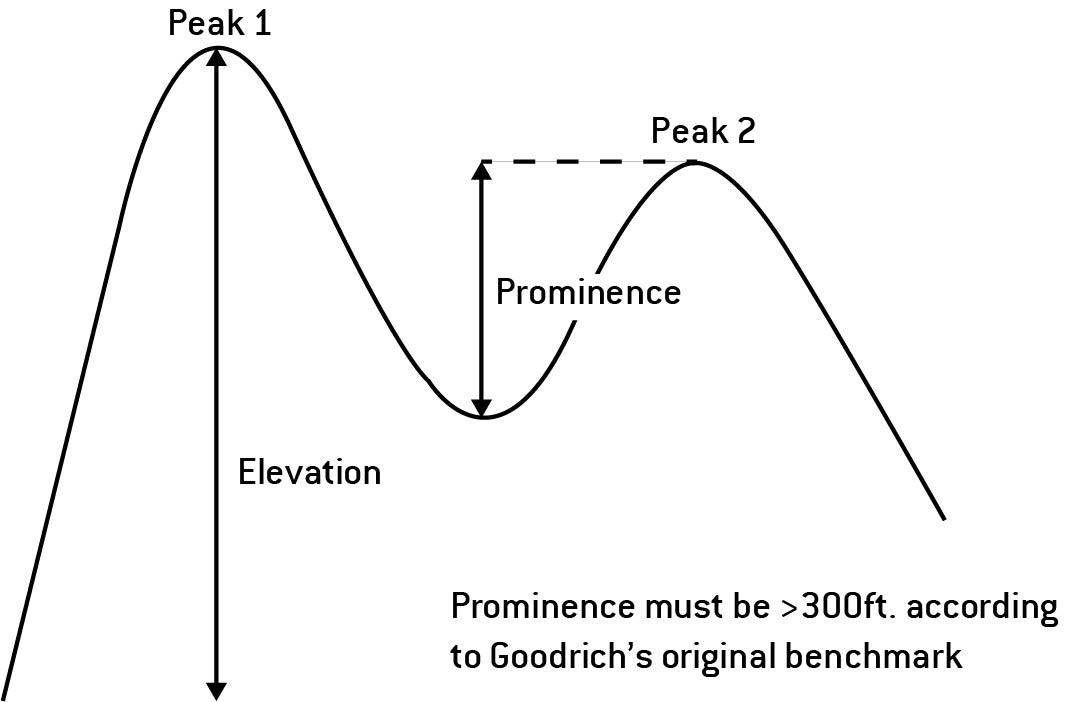 In 1934, AMC member Francis B. “Mully” Parsons became the first person to finish Goodrich’s original list of 36 peaks – even climbing Hancock and Owl’s Head – which were rather inaccessible at the time and required a great deal of bushwhacking. Dana C. Backus, a member of the AMC trail crew who completed Goodrich’s 36 peaks in 1953, described the ascent up Owl’s Head: “My clothing was ripped to ribbons. Scarcely enough was left of my shirt to flag a wheelbarrow, but I had at last reached the top of Owl’s Head.” 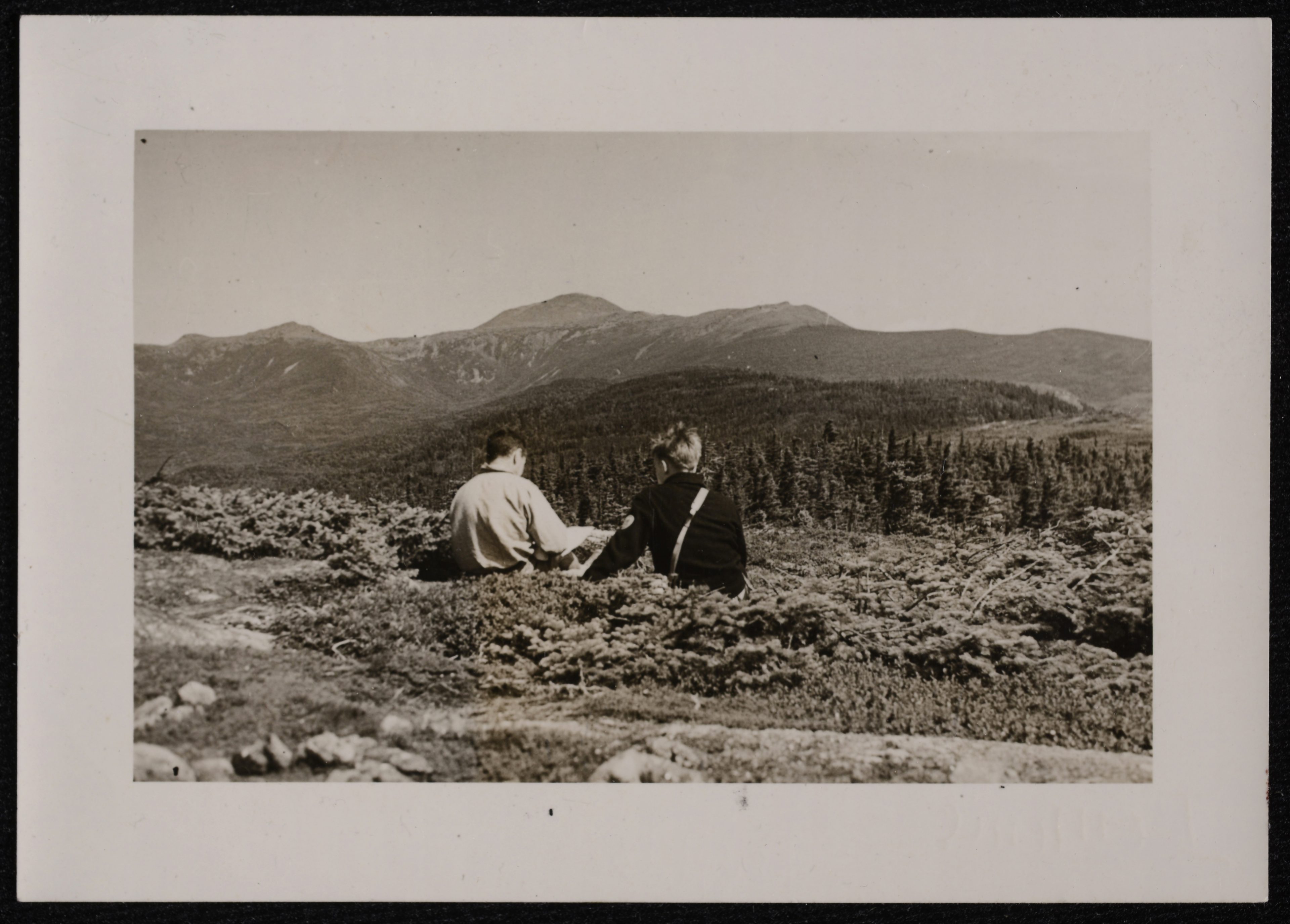 Throughout the mid 20th century, several people attempted to climb Goodrich’s 36 peaks, and many tried to expand or alter his original list. Goodrich himself expanded the list to 51 peaks, though some of these were selected not because they met the 300-foot prominence rule, but because they met the elevation criteria and were dignified by names (as opposed to several unnamed mountains at the time). In 1956, AMC member Roderick Gould also added Mount Willey and Mount Bond to the list, claiming that they had met the 300-foot criteria.

Edwin Scotcher proposed the creation of the Four Thousand Footer Club (FTFC) at an AMC General Outings Committee meeting in 1957. The new group would help organize and finalize this list of 4,000-footer peaks as well as introduce climbers to new areas of the White Mountains. Members of the FTFC sent a letter to the AMC Council requesting approval for this idea and included a design for a shoulder patch created by artist, Mark Fowler. The AMC Council approved the idea under the stipulation that the list of peaks be modified using benchmarks like prominence, rather than selecting mountains merely on the basis of having a name.

As a result, members of the FTFC met at Parsons’ home to create a list that utilized more scientific conditions. After analyzing the 1955 AMC White Mountain Guide and the latest U.S. Geological Survey topographic maps, the group decided to use a 200-foot prominence rule. That is, each peak must rise 200 feet above any ridge connecting it with a higher 4,000-foot neighbor. The FTFC ended up with a list of 46 peaks that were approved by the AMC Council – coincidentally, the same number of 4,000-footers as the Adirondacks.

On May 26 of 1957, Robert Gould became the first person to finish the new list of peaks. The next to finish, on September 14, were Miriam Underhill and Robert L. M. Underhill, two of the most prominent Northeastern mountaineers of the time. In 1958, the official list of 4,000-footers was published in Appalachia, along with climbing directions for the then eight trailless peaks on the list. Following the official publication of the list, a wave of enthusiasm for peakbagging swept the Northeast, with a Boston Globe headline in 1958 reading: “AMC 4000-Footer Club Spurs Climbers.” 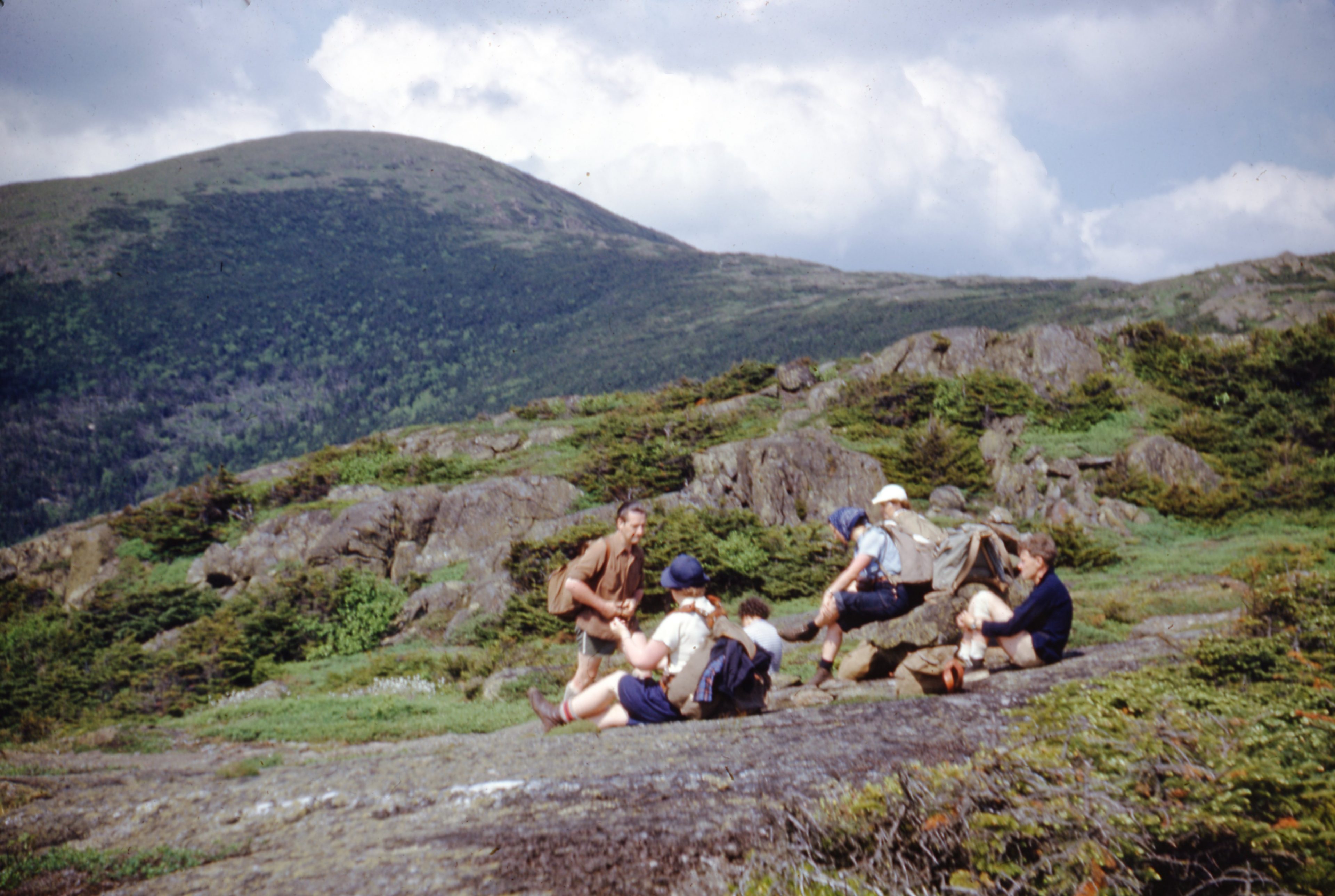 As an additional challenge, Miriam and Robert Underhill launched a new peakbagging adventure in 1960 – climbing all 4,000-footers in the winter. Winter was defined in simple terms: “not spring, nor summer, nor fall.” In other words, to claim a winter ascent of a mountain, one had to complete their hike between the first and last day of the season, usually between December 21 and March 21. Miriam and Robert Underhill specified: “‘Snow on the ground’ and other namby-pamby criteria definitely did not count.” The hike had to be in the time frame of the winter season. On December 23, 1960, the Underhills became the first people to complete the winter peaks after an ascent up Mount Jefferson. 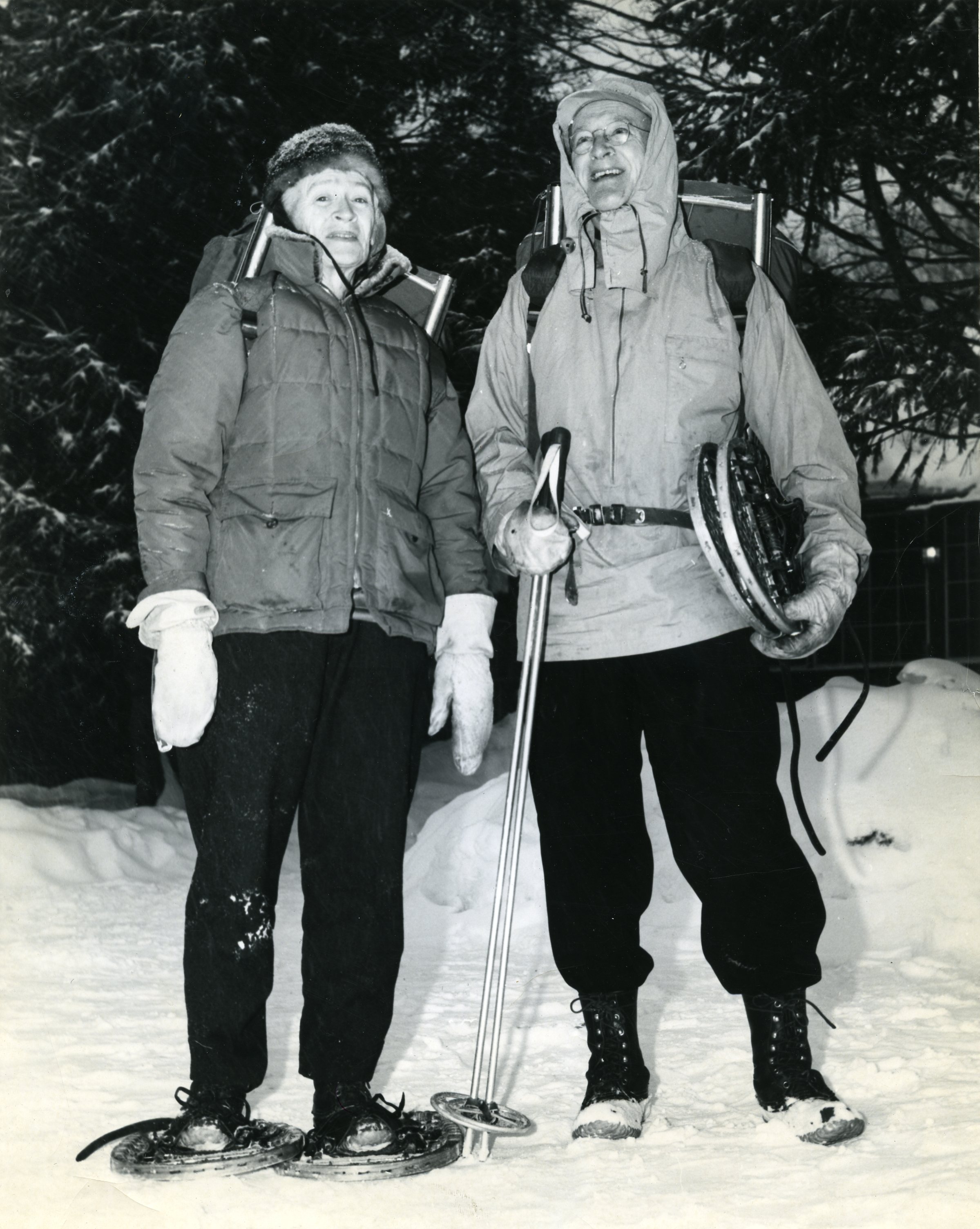 AMC Library & ArchivesMiriam and Robert Underhill in the 1960s

In 1967, following the publication of the South Twin quadrangle by the U.S. Geological Survey, Galehead Mountain was added to the 4,000-footers list. In 1980, Bondcliff was added, rounding out the list at the 48 peaks known today. However, there is some speculation over whether all 48 of these actually meet the criteria. According to AMC Cartographer, Larry Garland, Mount Tecumseh just narrowly misses the margin at 3,995 feet.

Today, the 4,000-footer list continues to inspire hikers to explore various parts of the White Mountains. The AMC Four Thousand Footer Club is still going strong, with members advocating and working for the preservation and wise use of the land.