A Conversation with Bryon Powell of iRunFar (Part 2) 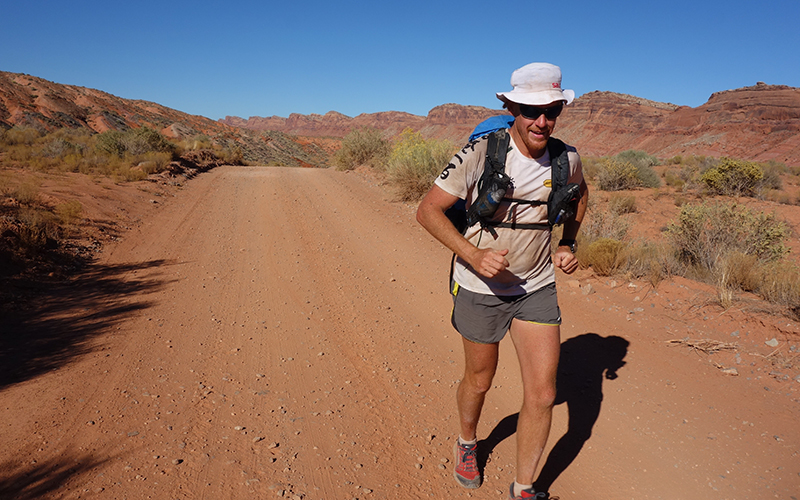 In part one of my interview with Bryon Powell, the founder of the trail and ultra marathon running website iRunFar.com, we found out why the entrepreneur left a law firm to start a website, whether he sees a difference between “runners” and “trail runners,” and what he carries in his pack. Here in the final half of the interview, we’ll ask Powell about the sport’s future, his 250-mile run in Bears Ears, what he thinks of the activity tracking trend, and much more. Enjoy!

Running Wild: It seems like ultra marathoning had its own identity before trail running caught on with a larger audience, and to this day ultra runners are very much the voice of trail running. Do you find that to be the case?

Bryan Powell: You are 100 percent correct. I think definitely in the United States, trail running and ultra running have often been synonymous. I have to be careful when describing iRunFar to make sure that it touches on both, because we discuss and touch upon races that are shorter than ultra marathons, but there’s very few ultra marathons in the United States that aren’t on trails. And certainly the vast majority of the coverage of those two areas is trail runs over the marathon distance. There are tons of shorter trail runs with lots of participation, but even when they have very competitive fields and very fast runners they don’t get the same coverage, don’t have the same following or buzz.

RW: In the decade that you’ve been covering trail running full-time, what has changed the most?

BP: Participation has grown a ton in the U.S. I think the majority of that took place over a period of, say, three to five years, after Dean Karnazes’s Ultramarathon Man and, even more importantly, [Christopher McDouggal’s] Born to Run. There was a huge growth in that time frame. So I think there’s been huge growth both in racing and casual trail running over the last 10 years, and at the same time there’s been a lot of growth in coverage of the sport, both in niche publications as well as the mainstream press. A runner like Kilian Jornet is in the New York Times Magazine on the weekend, or Outside Magazine is going to have a profile on a Jim Walmsley or a Rob Krar. All of this has made getting into some of the more famous races almost impossible. I actually feel bad for people who really want to run their first Western States 100 or Hardrock 100. I don’t know if the odds were 50/50 when I first applied for Western States in 2004, but now, your first year, you might have less than a 1-percent chance of getting in. That’s hard. The numbers of participants allowed in U.S. trail racing in particular is so low that as participant interest increases, the odds become impossible very quickly. And that has to do with U.S. land management and U.S. racing philosophy and that sort of thing. The great thing about that is that it’s hard because those are the most talked-about events and the most aspirational events, but at the same time we’ve gone from, at one point, one 100-miler in the U.S. and then there were four—and when I got into it there were 15 to 20, probably. And now there must be 120 to 200. So the number of races, no matter the distance, has grown so quickly that you have more opportunities than ever to try your first trail race or your first ultra marathon. Which is awesome.

RW: Over that same decade, what hasn’t changed?

BP: Left foot, right foot, left foot, right foot. I mean, it’s crazy because the awesome thing about running—it’s the same with hiking—is you can go out the door right now, probably, in what you’re wearing, and run. I don’t care if you’re wearing a pair of slippers—I’ve done that this year. If you’re in a pair of jeans, you can run in that. There’s no excuse. The barrier to entry is so minimal that the sport of running is the foundation of sport. It doesn’t get any simpler, whether it’s competition or not. It’s something that is innately human, to run.

RW: You meet a lot of people in the trail running world. Do you see any sort of common thread that links their running pasts?

BP: Not at all. That’s the awesome thing. I know people who have been running since they were 8 or 10, super young kids who are still running today, and people like you and me who started with high school cross country. But I also know plenty of people who started running at 35 or 40 or 50 and get into all sorts of trail running, including ultra marathons. Especially, I find, as you get past the 10 mile or half marathon distance the pace slows enough, especially in trail running, that there’s no real negative stigma to walking. Even if you’re just starting out and you’re walk-running from the gun, you can do that. There’s nothing embarrassing about that. It’s a hike with some running.

RW: What advice do you have for people new to trail running?

BP: Go out to some local park and go for a 2 or 2.5-mile hike and just jog a couple times. Don’t pick too audacious or intimidating an outing. There’s no reason to go for that 8-mile run up the biggest mountain near you. No. Maybe that’s your goal, but just go out there and bite off little bits and bite off a little more next time. And enjoy it. You can challenge yourself but don’t set yourself up for failure. Set yourself up for fun and enjoyment.

RW: With the popularity of Strava and other activity-tracking apps, and “Fastest Known Time” attempts, is the way some people publicize their activities sort of counter to the escape that many people seek on trails?

BP: All of it can be distracting. You can get caught up in setting this record or thinking that you’re so much slower than another person. Ten years ago you never would’ve known what anybody had run on a trail. There’d be no reason to know that, oh yeah, Kilian Jornet goes up that trail 30-percent faster than me on his easy day. And that can be demoralizing but it can also be inspirational. I think it’s all how you look at it. I use Strava every day and I look at it and I keep track of my college teammates and my neighbors from home growing up, my sister, a couple top runners who I consider friends. It’s a way to see what my friends are up to and it makes me feel connected. People do get carried away with it, whether it’s on a particular run, your mileage per week, or your vert per week, or your hours per year. I use all those things as ways to monitor my own training. I don’t get caught up in competing with others—I use them as inspiration. One thing I’ve found, say, taking photos is the same thing can happen. Like tourists, who get more caught up in taking photos than being in the moment, the same thing can happen on a run. There’s times when I can feel myself wanting to focus more on the photo taking, which is fine inherently, but sometimes there’s runs where it’s like “I’ve done this too many times, I’m just going to leave the phone at home. This run is just for me.”

RW: I know I was not especially conscious of land conservation issues and Leave No Trace until I reached AMC, and at that point I’d been running on trails for 15-plus years. In your experience, is the trail running community a strong land steward?

BP: I think there are a large number of trail runners who are very motivated by their personal interaction with the land to be conservation-minded, whether in their individual actions or through promoting land stewardship more broadly. I live in San Juan County, Utah, so I get fired up in trying to protect the Bears Ears National Monument to its fullest extent, and other land issues in southeast Utah, whereas other people might be involved in issues in Virginia or Washington or Maine. You can act locally. I think trail running enhances the feeling of stewardship for those people. I think there’s plenty of trail runners who could benefit from additional information or education. I think there are very few intentional bad actors, but there’s people who could be better about not stepping on cryptobiotic soil in the desert or going into alpine zones. I think trail runners could benefit, and are doing more—I hadn’t heard of plogging before the last year—there’s a lot more trail running groups in urban or semi-urban environments going out and cleaning their trail system.

RW: About a year ago you ran across Bears Ears National Monument. What motivated you to do that?

Last October I ran from my house in northern San Juan County, Utah, to the north end of Bears Ears National Monument to the south end, via a fun route—an adventurous route and about 250 miles in total. And I did it because in President Obama’s final days he designated a very large national monument in my home county, and I’d only seen very small parts of it. I wanted to experience it on the ground. I’m fairly active in the trail running community and I thought I could raise awareness of it amongst our community. My biggest takeaway from it was that the expansiveness of the monument was a key and crucial aspect of the monument. Being able to go for days and days and days, at a relatively quick pace, and traverse it, was pretty awesome. And the amount of variation and cultural resources over that span were just tremendous. There were times when I felt like I was a dozen miles from the nearest person. It’s awesome that there’s such wilderness out there.

RW: If you could go for a run anywhere in the world tomorrow, where would you go?

BP: Iceland. It’s just kind of one of those mythical places: the volcanic landscape with the ocean and glaciers. One of the things I love about a lot of southeastern Utah is the expansiveness and stark beauty, and I’d love to see that in a different color palette.

BP: I am looking forward to what I can only imagine will be a continued growth of trail running and it’s increasing connection of people with the natural places around them. And that does breed stewardship and value. I guess on the other side of that, I’m worried about the impact of the continued growth and use will have. As you get out to the fringes and currently lighter-used areas, how will those be impacted by increased use? Not just by trail runners, but everyone. I think there will be continued growth of hiking and biking and backpacking as we become a more digitized and screen-time-based world, that people will continue to seek that which counter balances it. And that’s heading out into nature.