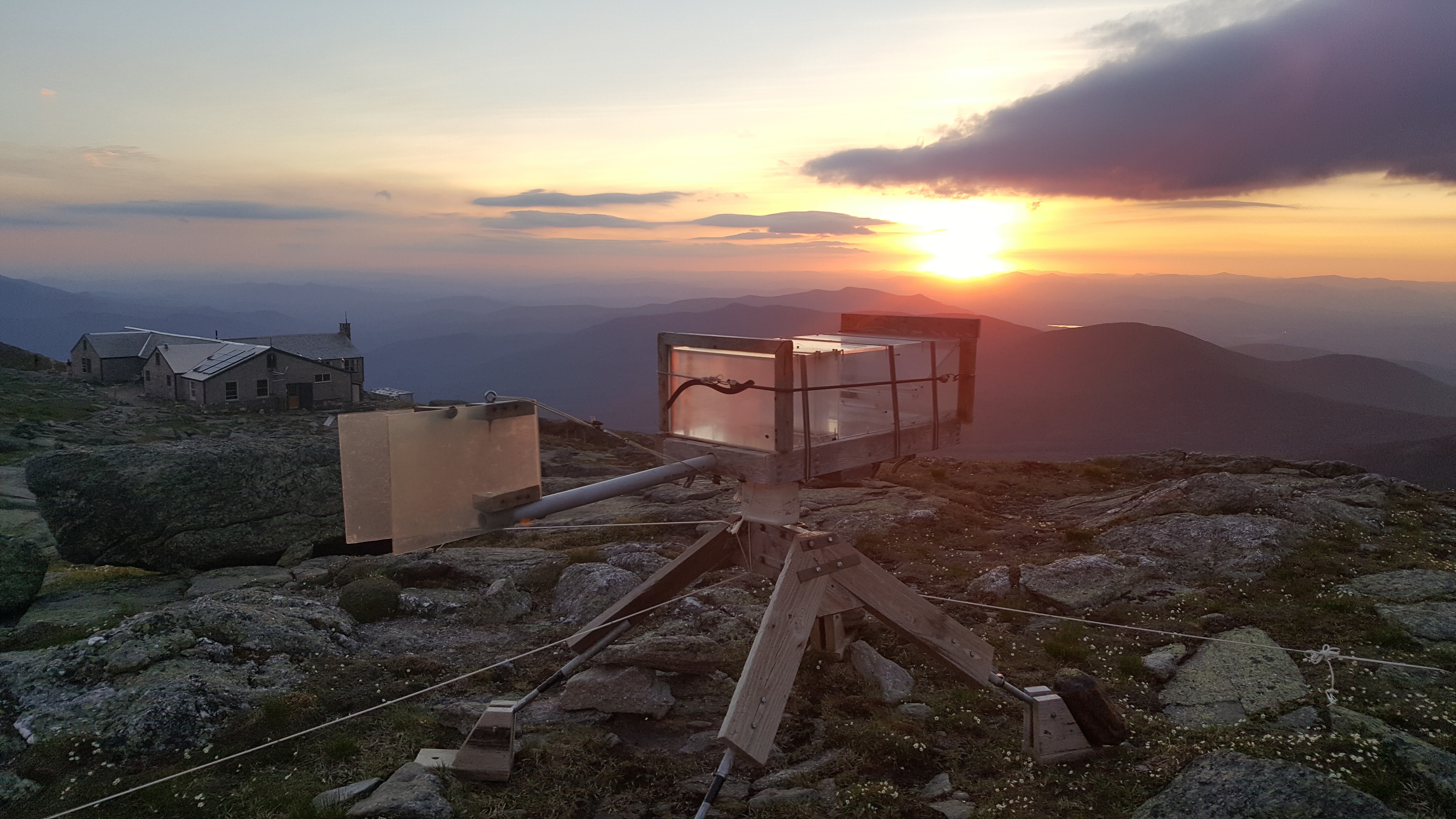 AMC’s cloud catcher at Lake of the Clouds hut. Photo by Jack Hastings.

Evidence that the Clean Air Act works can be found in the clouds. Every summer the AMC sets up a low-tech cloud catcher on the slope of Mount Washington and we have accumulated a dataset unlike any other.  Clouds are “caught” when they pass through the sample box and cloud water precipitates onto a bank of Teflon strands and drips down into a collection bottle. The Lakes of the Clouds Researcher catches both the rain and cloud water throughout the summer, and the samples are then analyzed for pollution and other chemical components.

Since 1984 the acidity of both rain and clouds has dramatically improved. The amount of sulfur and nitrogen pollution has also declined. In fact, nation-wide EPA has reported that Clean Air Act programs including the Acid Rain Program, the Cross-State Air Pollution Rule, and the Mercury and Air Toxics Standards, have resulted in healthier, cleaner air and water.  For example, the Acid Rain Program reduced sulfur dioxide emissions by 1.5 million tons since 1990, a 91% reduction. 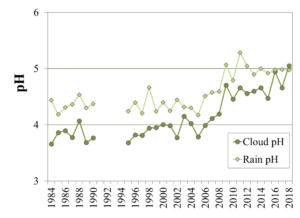 Lakes of the Clouds pH (acidity) data from 1984-2018. pH values below 7 are acidic with acidity increasing as numbers decrease.

This same foundational law—the Clean Air Act– that has so successfully addressed other air pollution problems, can also help us address climate change. The Clean Power Plan (CPP), a regulation intended to implement the Clean Air Act with respect to greenhouse gas emissions, is a centerpiece for US climate action. Under the CPP as finalized by the EPA in 2015, carbon emissions from existing power plants would be reduced 32% from 2005 levels by 2030. Based on the most recent estimate of power generation and demand, which has continued to shift to lower carbon sources and more efficient usage, this target is likely easily achieved, reinforcing AMC’s position that it should be strengthened. Yet President Trump is trying to undo this common-sense plan, finalizing instead a weak and irresponsible replacement. His Clean Power Plan replacement leaves a well vetted, market-based approach on the cutting room floor.

Reducing carbon pollution from existing power plants – the largest stationary source of the pollution that contributes to climate change– must be a priority. The Clean Power Plan protects public health, promotes climate change solutions, and encourages investment in clean energy. The Trump Administration has turned its back on market evidence underscoring that coal is on its way out, with more than 50 coal plants having announced retirement plans since he took office, and the cost of clean energy is now at an all-time low. The so-called Affordable Clean Energy rule to replace the Clean Power Plan is not only backward but dangerous, as it will only benefit a few coal companies and does not protect human health and the environment as required under the law.

In fact, the Trump EPA’s own analysis found that the Clean Power Plan could prevent as many as 4,500 premature deaths each year by 2030 – more than originally estimated — and previous estimates found it could provide up to $61 billion in health and climate benefits per year in 2030. The Clean Power Plan also encourages investment in cleaner, safer renewable energy sources. In contrast, the Trump EPA’s plan (as proposed last summer) could result in up to 1,400 more premature deaths, 120,000 more asthma attacks, and up to 64,000 missed days of school annually in 2030, as compared to the Clean Power Plan.

Through AMC’s Conservation Action Network, AMC advocates have submitted thousands of comments supporting the Clean Power Plan and other necessary environmental regulations in response to the Trump Administration’s efforts to roll back these protections. Unfortunately, despite those comments and tens of thousands of others from around the country, the Administration is moving forward with an irresponsible rollback and replacement of the Clean Power Plan.

Sign up for AMC’s Conservation Action Network today and stay tuned for future opportunities to speak up in support of clean air and a healthy environment.

Conservation and Nature Notes blogger Georgia Murray has been AMC's Air Quality Staff Scientist since 2000. She has an M.S. degree in Earth Sciences from the University of New Hampshire and currently oversees the AMC's air quality and climate monitoring programs.