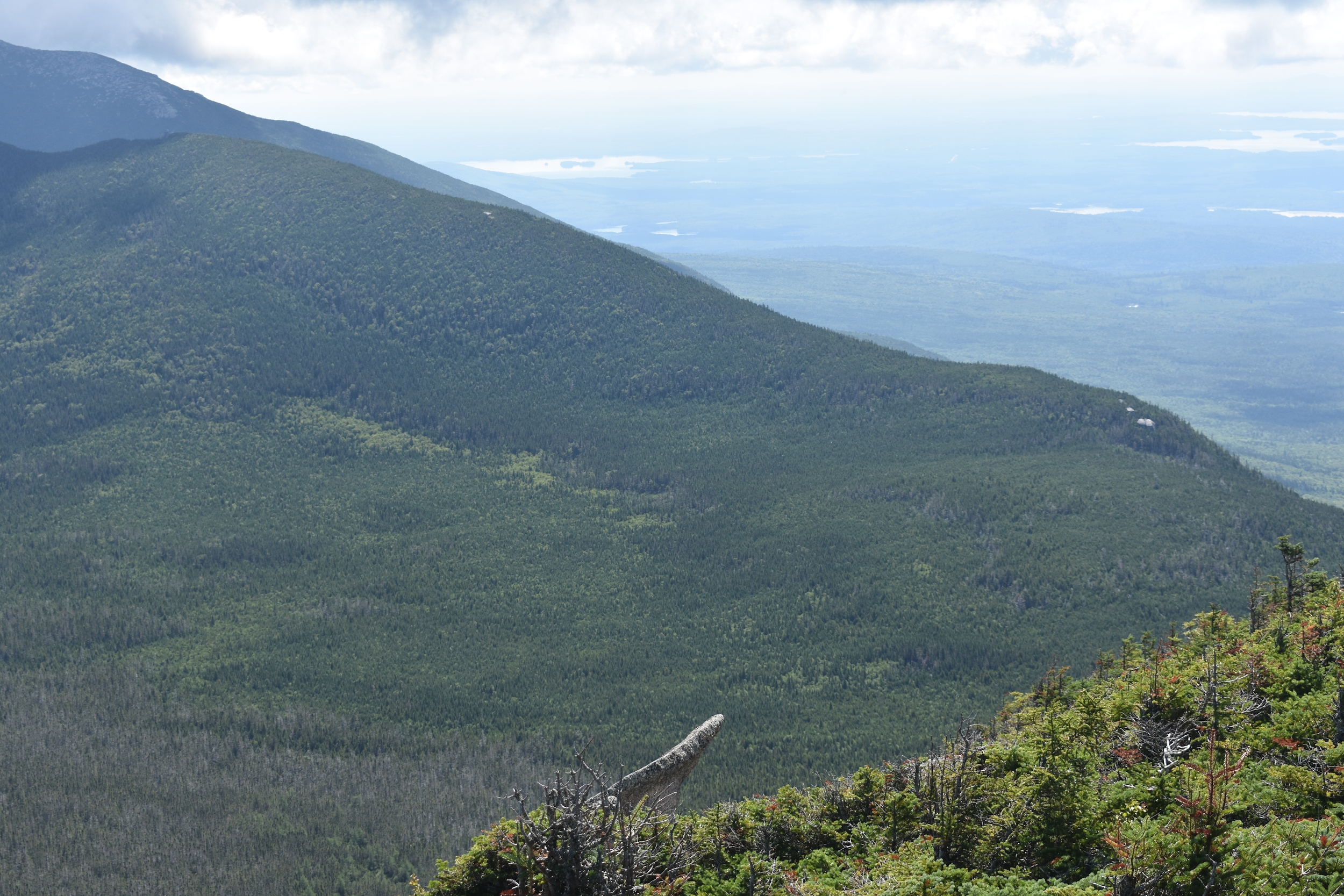 What are Growing Degree Days?

GDD are a unit of temperature that when exceeding a threshold accumulates daily. GDD are calculated as the difference between average air temperature and a specific base temperature that is dependent on the plant or animal you are studying. For example, studies show that for the sugar maple, Acer saccharum, flowering begins with an accumulation of roughly 30 to 55 GDD and a base temperature of roughly 41°F. It is assumed that below the given base temperature, the species of interest will not develop with this value. A specific number of GDD units must be met in order to trigger a change in growth and development such as budburst or flowering in plants. For example, farmers know from past seasons that corn has an average base temperature of 50°F which they can use to calculate GDD. This information is used to estimate the timing of the crop stage. With this knowledge, farmers can track the accumulation of GDD (using observed temperature) to predict when to plant seeds, apply fertilizer or pesticides, and estimate when to harvest crops. For avid home gardeners, using GDD can be useful for determining which plants are most suitable for a given climate, timing planting to avoid frost damage, and predicting stages of the crop cycle such as ripening and harvest.

Monitoring fluctuations in GDD from year-to-year is important for understanding patterns and changes in the developmental transitions of plants. As part of our ongoing plant monitoring program, AMC is closely analyzing GDD from established air and soil temperature sensors and data loggers distributed throughout the White Mountains, NH.  Detailed data sets of past daily air temperatures make these observations possible and play an important role in helping predict future trends.

How are Growing Degree Days Calculated?

GDD are calculated by finding the average of the maximum (Tmax) and minimum (Tmin) daily temperatures and subtracting this value from a base temperature (Tbase) of interest. For example, if we use a base temperature of 50°F, and have a Tmax of 74°F and a Tmin of 46°F, we take the sum of the daily minimum and maximum temperatures, divide this value by two, and subtract 50°F. This results in a total of 10 GDD for a given day. Since this value is greater than zero, it then becomes the number of degree days accumulated for that day. If the resulting number is zero or below, then the GDD is zero for that day because the base temperature was not exceeded. GDD are cumulative–they add up as the year progresses–since they are calculated daily.  Although GDD varies based on location, these data are commonly recorded beginning on January 1st of each year to capture the critical transition from winter into spring.

AMC uses GDD thresholds from 28°F through 41°F for native flora throughout the White Mountains for alpine and forest species. We choose a threshold for a given plant community based on a variety of factors such as elevation from previous studies. 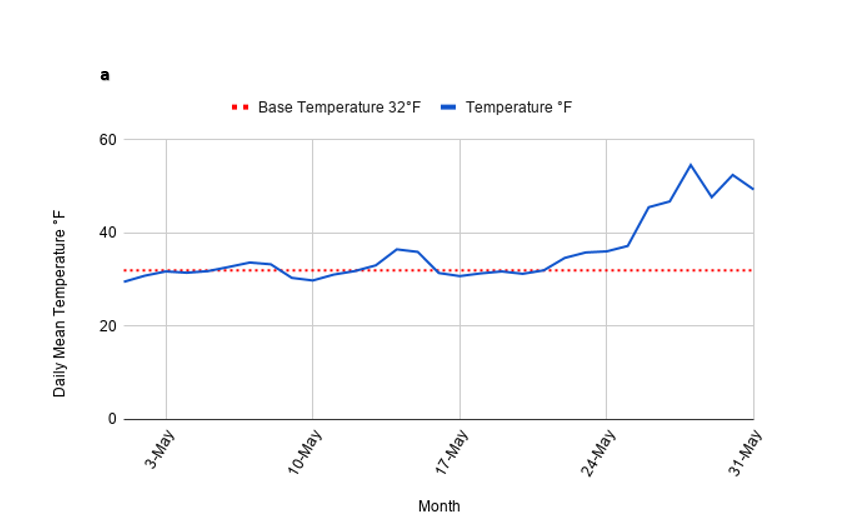 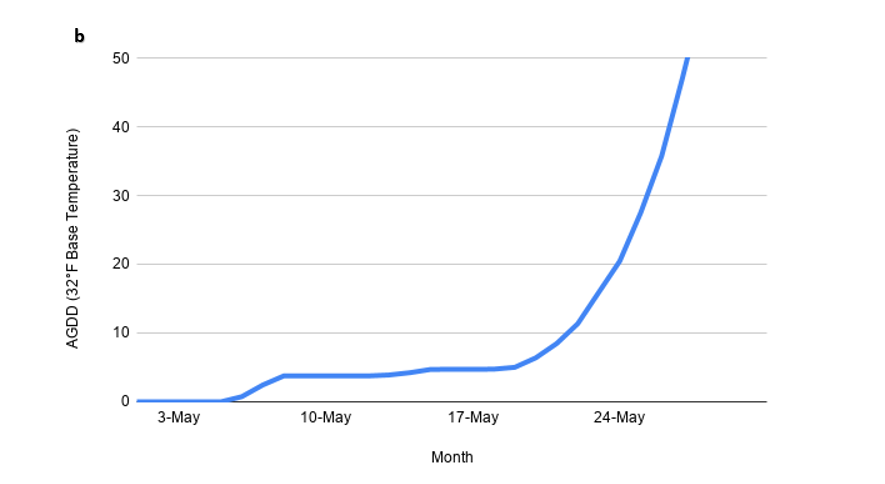 In Figure 1, we show the relationships between daily temperature over the course of a month with corresponding GDD accumulation once the daily temperature exceeds a base temperature of 32°F. These data provide insight into the variability of daily-temperature trends associated with GDD. These results can aid researchers and farmers in understanding how changes in GDD accumulation will impact crops and how the timing and distribution of vegetation communities may change in the future. 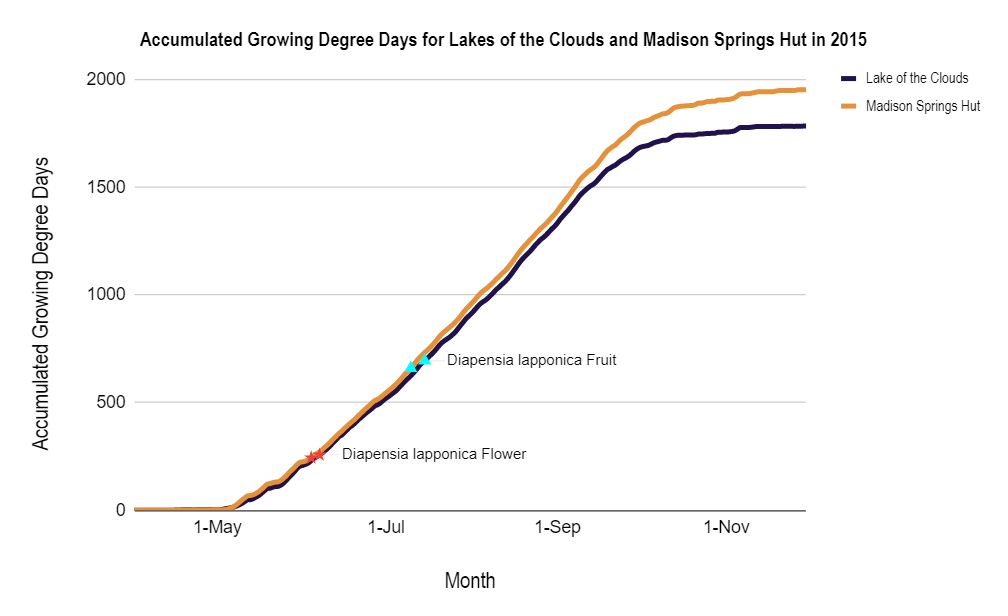 Figure 2: These data show that flowering (red stars) and fruiting (blue triangles) dates of Diapensia lapponica were later at Lakes of the Clouds compared to Madison Springs Hut during the same year. The accumulation of GDD with a base temperature of 32°F is shown for the months of April-November. The table above summarizes the information presented in Figure 1.

Figure 2 shows how the flowering and fruiting date of Diapensia lapponica varies between sites as well as the amount of accumulated GDD. This subtle difference can result from variation in elevation or even micro-climates between sites, which provides insight into potential drivers of variations in the timing and occurrence of plant development, and how they vary from region to region.

What Can Growing Degree Days Tell Us About Climate and Phenology?

Studies show increasing air temperatures in the northern hemisphere in recent decades. This trend is predicted to continue well into the future with The Northeast Climate Impact Assessment projecting an increase of 2-4°F during winter months and 1.5-3.5°F during summer months over the next several decades across New England. The impact of this warming is already apparent for New England with an overall increase in GDD as a result of warmer, shorter winters and hotter, longer summers. Increases in GDD that result in shifts in the timing of plant development can ultimately result in a temporal mismatch between vegetation and animals that depend upon one another for food, shelter, and pollination. These delicate relationships make it critical to closely monitor GDD  to understand how mountain plant communities will respond as each will behave in their own way.

Researchers at AMC are monitoring changes in temperature and its impact on the growth and development of plants over time. This method provides additional information about the impacts of climate change within the White Mountains of New Hampshire, as well as across the Northern Appalachian region.

Additional sources to further read about GDD and its many applications can be found in the National Phenology Network, which provides customizable and interactive GDD maps and figures. Additionally, The Emergence Process in Corn and Iowa Crop Calendars provide insight into the applications and use of GDD in the field of agriculture.

Valeria is a masters student in the School of Forest Resources at the University of Maine. She is a part of a National Science Foundation (NSF) National Traineeship Program (NRT) that focuses on conducting transdisciplinary research within Maine. Her research focuses on analyzing changes in Maine forest phenology over the past 16 years and understanding how climate and other environmental factors have influenced these changes. She is also interested in developing and conducting participatory workshops with Maine State Parks to share information that will help to better inform resource management decisions. Valeria’s expected graduation date is Summer 2021. For additional information on the University of Maine NRT Program and Valeria’s Research, please visit the following website, UMaine National Research Traineeship Program.