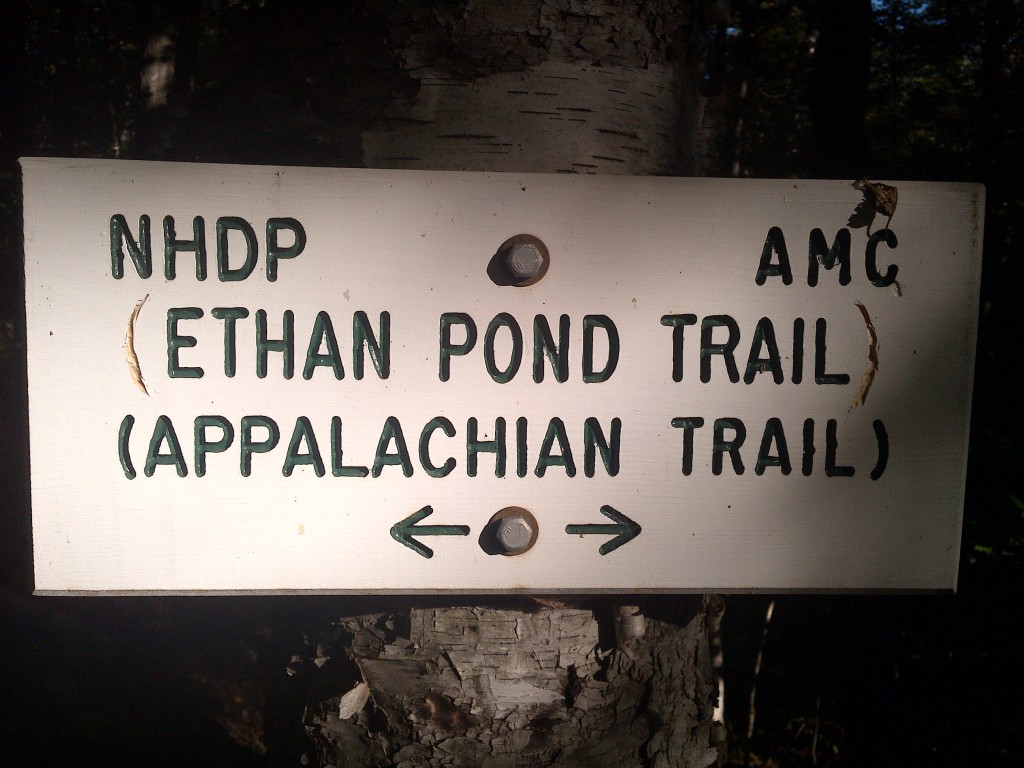 In the White Mountains, we have a lot of trails…a lot.

There are over 1,200 miles of non-motorized trails on the White Mountain National Forest alone. Include non-motorized trail networks that lie on State managed land in the White Mountain Region, that’s about 100 more miles. And with trails come signs; signs to tell you which trailhead you’re at, what trail you’re walking on, how far away you are from where you actually want to be, summits, outlooks, interpretive displays the list goes on and on. Add in the piece that many of these trails are maintained by different clubs or agencies depending on where the trail begins, ends, and travels in between.

As the White Mountain Trails Supervisor one of my responsibilities with the help of  trail crews and volunteers are to manage all the signs that AMC is responsible for in the Whites Mountains and Mahoosucs. Excluding trailhead signs and most Appalachian Trail signs, which land managers are generally responsible for, the AMC maintains signs on AMC maintained trails (e.g. Avalon, Nineteen Mile Brook, Carlo Col, Falling Waters…) The AMC maintains over 110 separate trails, about 350 miles worth of trail (104 miles of A.T.) from Kinsman Notch in NH to Grafton Notch in ME. If you were to open up a map and look at all the trails in the Whites, you’d quickly realize just how many signs are needed out there to help provide direction to the hundreds of thousands of users that visit every year. In fact we keep track of all signs that fall under our responsibility using a digital database; we can record current sign and post conditions, save past conditions,  and attach pertinent notes and photos. Each sign, designated by the number on the back has it’s own “file”. In our database we have over 700 signs that are on trails that the AMC maintains. Not included in that database are signs for other clubs such as the Randolph Mountain Club, Chatham Trails Club or trails that are maintained solely by land agencies such as the USFS, NHDP, or MBPL. Include those signs and you’re over 1,000 signs easily.

Most signs on the forest are made of wood. Pine, oak , spruce, fir are usually the most common materials – especially once you get away from a trailhead and well into the backcountry. Some are painted, some are stained, in Wilderness Areas we all keep our signs unpainted to help maintain a more natural, wild feel in those designated areas. Like most natural, untreated products these signs begin to show their age; rot, wind, precipitation all play their part in sign degradation. A sign mounted to a tree may rot out and fall, branches from above may snap and come crashing down onto the sign, or wildlife like bears and porcupines may chew, gnaw and claw at signs. It’s all part of the process really. We’re never too upset when a sign becomes so riddled with rot that we need to make a replacement or we come across a newly hung sign a bear decided to take a swipe out, ripping off all but the top third– these are just part of process and most signs live a long and prosperous life on their tree or post.

There is one element to signage that does irk sign makers and trail maintainers and it’s the human element of sign degradation. This past summer we witnessed one of the more significant efforts of human caused sign degradation. Take a minute to scroll through the following photos: 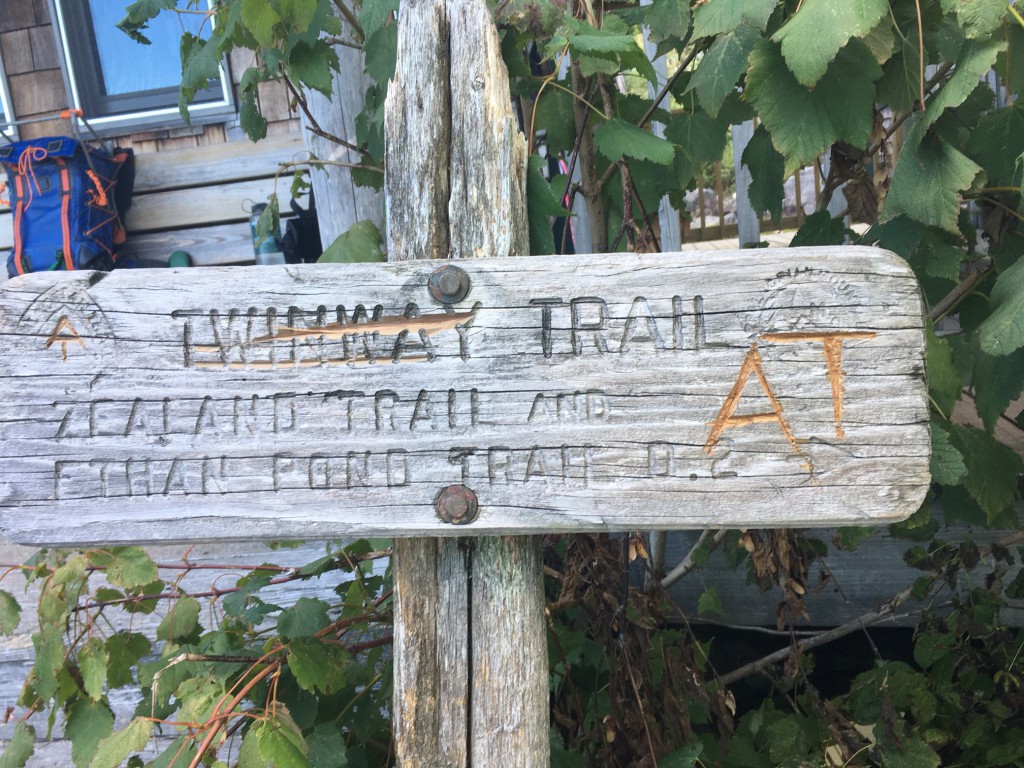 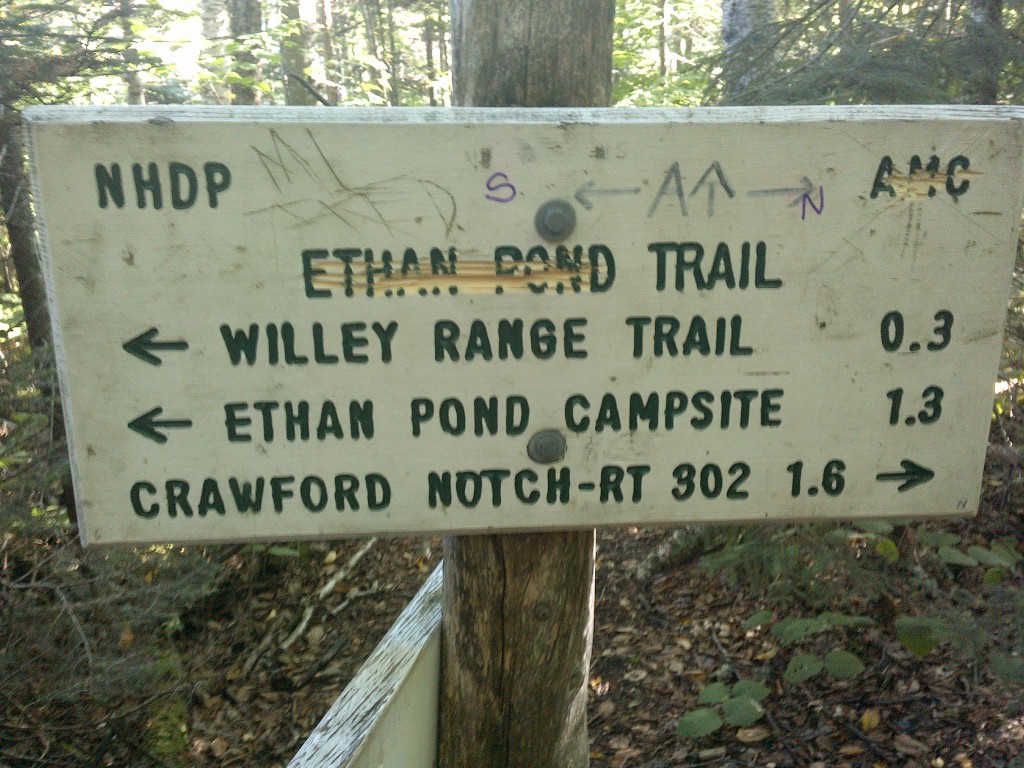 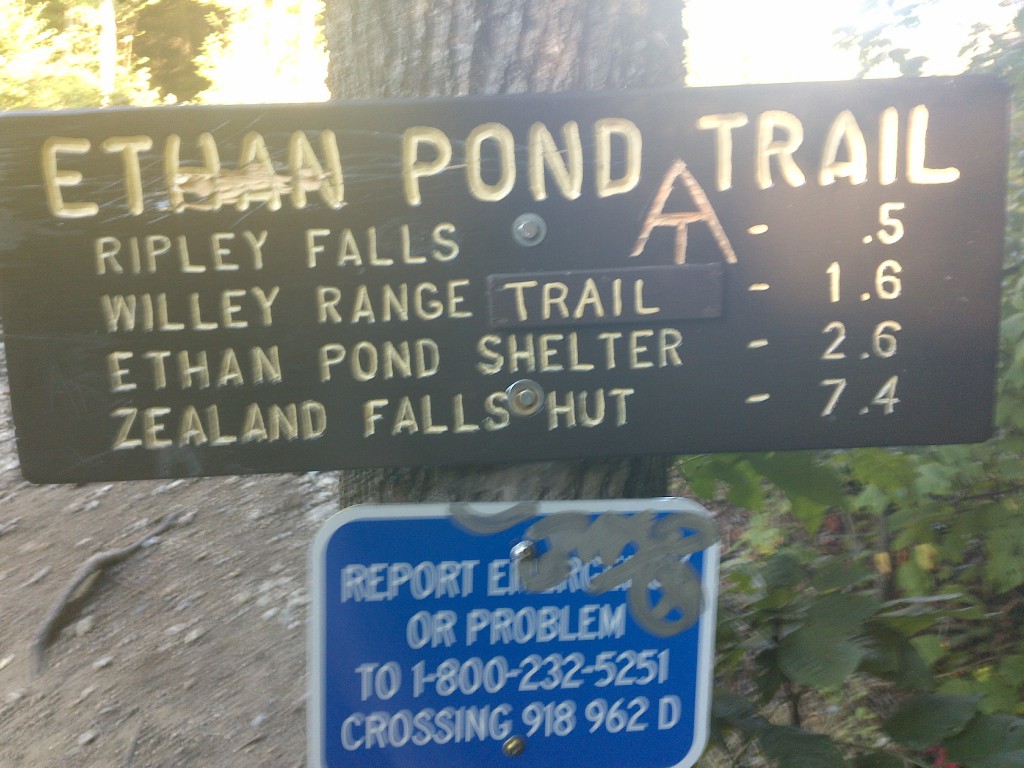 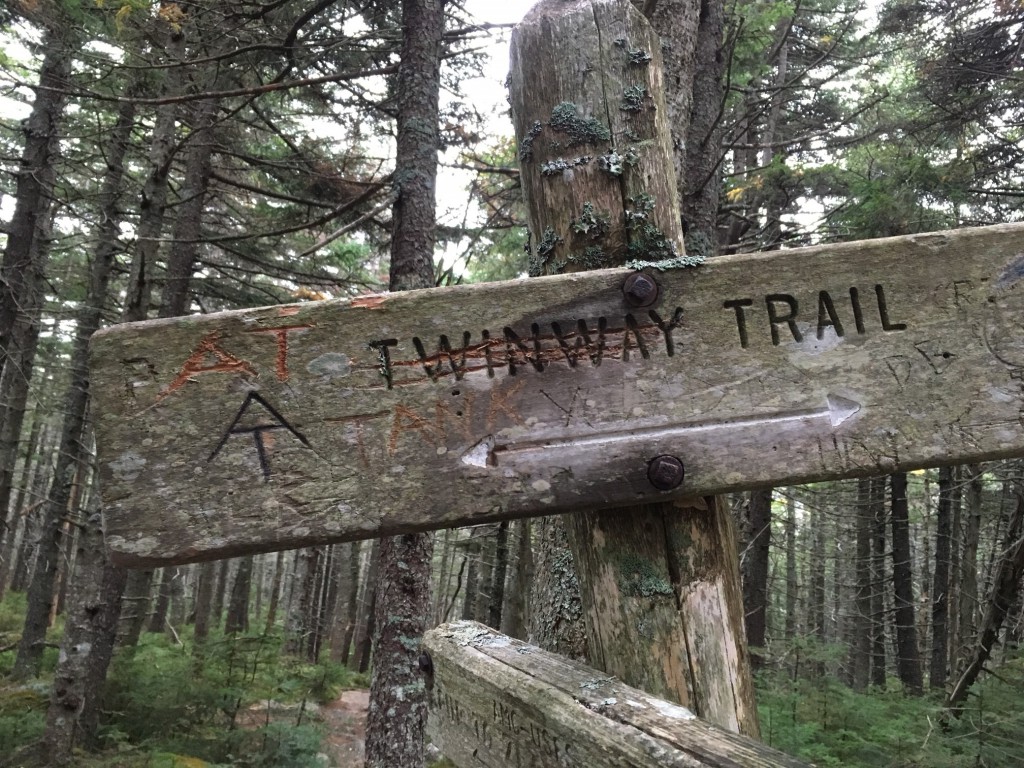 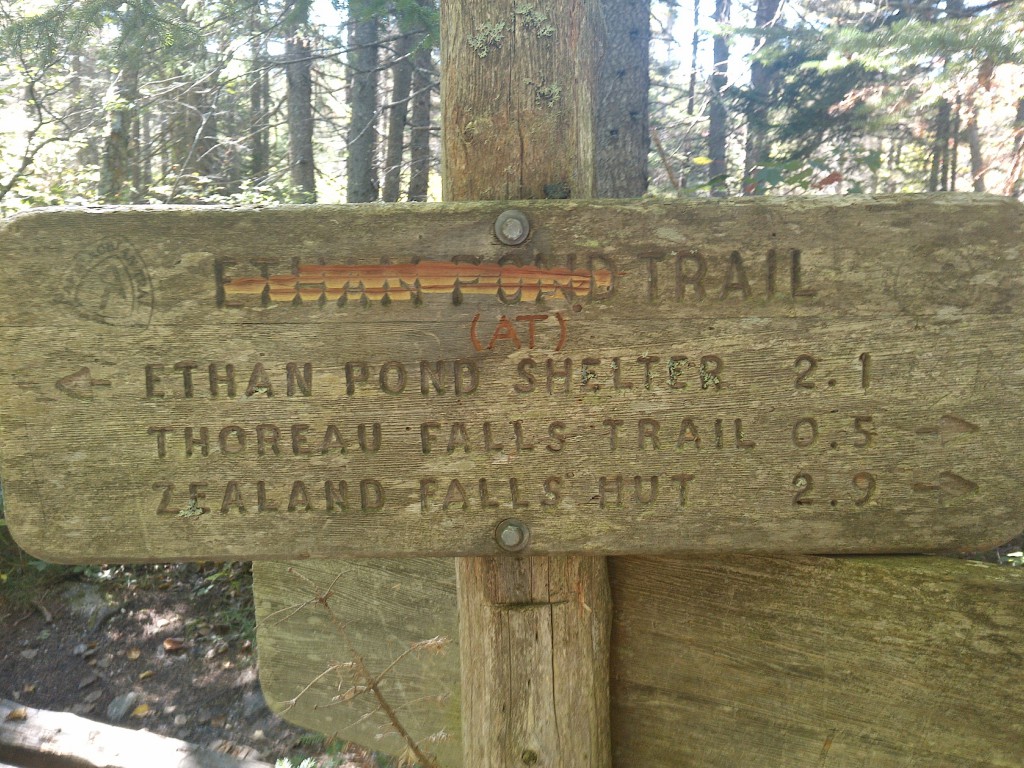 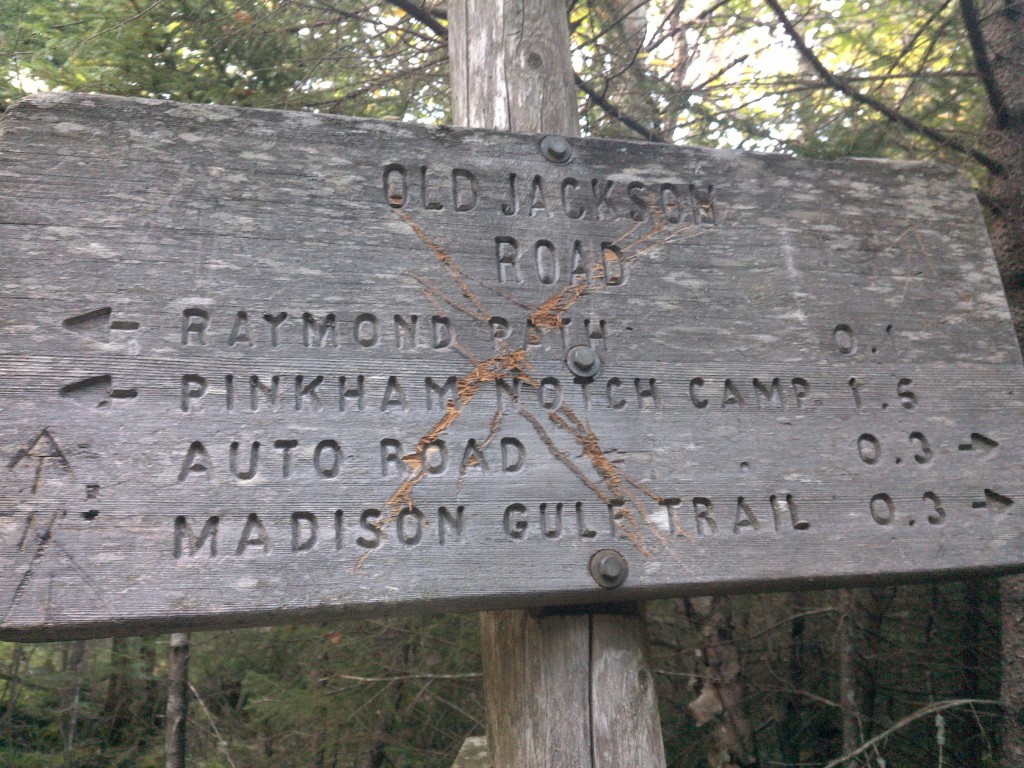 A couple of things to notice. One, these signs all sit along the Appalachian Trail and two, signs that AMC, the USFS, and New Hampshire State Parks are responsible for all have signs that are significantly marred (presumably by the same individual(s)). These are just a handful of signs that have been defaced like this. Many more sit along these trails including the Gulfside Trail, Webster Cliff Trail, Osgood Trail, and Madison Gulf Trail, just to name a few.

Trail managers are aware of the issues with our trails signs along the A.T. As you may have noticed on your own hike, on the A.T., once you hit the Whites signs refer to the trail by their local names. We receive much consternation about how signs here in the Whites lack reference to the A.T. as compared to the trail north and south of us. We have responded to this consternation by adding a reference to the A.T.  to signs as we have replaced in recent years but we should explain as to why our trails aren’t just called the A.T. 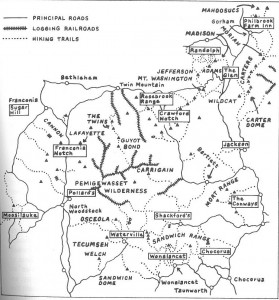 A quick look in history will help shed light on this reasoning. The A.T. came to fruition in the 1920’s with the vision of Benton MacKaye and others such as Arthur Perkins and Myron Avery. Between 1923-1937 the Appalachian Trail was established from Bear Mt. in New York, through western Connecticut and Mass, north though the Green Mountains of Vermont, east along the ridges of the White Mountains and Mahoosucs and northward across the Bigelows and atop Mt. Katahdin. These trail building efforts were no easy task and employed the help of AMC chapters, the Dartmouth and Norwich Outing Clubs, the Green Mountain Club, the Bates Outing Club, and the Civilian Conservation Corps (to name a few). Much of this trail spanning six states were scouted and cut in that time period with the exception of the Long Trail in Vermont and the trails crisscrossing the White Mountains and Mahoosucs.

Established hiking trails in the Whites predate the Appalachian Trail by decades. Waterville Valley, south of Mt. Osceola had the first ever recreational trail network in the 1850’s. Around 1875 clubs such as AMC and RMC began cutting trails out of Pinkham Notch, the Glen House, and the Ravine House in Randolph. Trails such as the Carter-Moriah Trail and the Twinway were cut in the mid 1880’s. In the late 1890’s trails going up and around Mt. Lafayette were being established. By 1900 the White Mountains had pockets of trail networks centered around vacation areas.

Much of the trail that the A.T. follows while passing through the White Mountains had not only already been cut and established but some sections of the trail such as the section going across the Carters and Mt. Moriah had been established about 43 years prior to the Appalachian Trail even begin conceived, let alone, built or finished!


And thus, because of our rich trail building, maintenance, and recreational history within the White Mountains we honor and collectively nod to the White Mountain trail builders and visionaries of the 1800’s and 1900’s. To those who bushwhacked up Webster Cliff to afford a view and saw a possibility, to the builders who meticulously set  boulders as pavers and built cairns above treeline on the Crawford Path and Gulfside Trail, and those who kept wanting to reach the next summit because it was just over there. 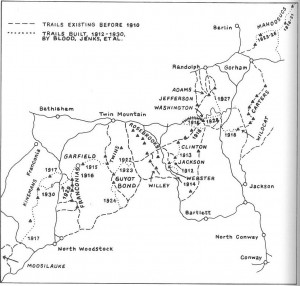 Now that we have some background knowledge on our trail history let’s revisit our defaced sign problem.

Most of the defaced signs that we come across are A.T. signs. Typically, someone with a sharpie will write A.T. with the letter N and S with arrows pointing north and south which to us seems unnecessary but not worthy of sign replacement. The above photos however are a step above where the hiker felt they needed to take their pocket knife out and carve out the trail name and carve in A.T.

The signs in this post will all likely be replaced. But what does that actually mean? What does it take to replace a sign? What’s the cost?

Well the costs are variable for a variety of reasons. There are costs in time and there are costs in materials.  The more lines on a sign, the longer it takes to route, paint, or stain; the more remote the sign is, the longer it will take to hike in, replace it, and then hike out. Signs with more text require wider board stock which costs more; signs with longer lines of text require longer boards.

Not every club or agency builds signs the same way. In AMC’s case, we still make signs by hand (as opposed to a CNC machine) with select pine board stock. We average about 2 linear feet per sign with boards averaging around 8 inches wide, the equivalent to a 3 line sign. On average a 2 ft. piece of select pine board stock costs about $4.50. Sign layout, routing, trimming, sanding, priming, and painting average about 1 line per hour when accounting for all steps. A 3 line sign takes about 3 hours to make start to finish. The board plus labor costs around $40.00. Over the past three years we’ve made around 35 signs a year, which takes the majority of the winter season to complete. Just taking the averages, that’s about $1,400/year for 35 signs.

Here is a quick look into how the AMC Trails Department makes signs:

Now the tricky part to really put a finger on. Trails signs live all over the place. Some signs are only a mile in while others you need to hike 4 or more miles just to get to the sign, let alone turn around and hike out. For the 2016 summer season we developed 30 sign routes; loops, lollipops, out and backs, end to ends. Volunteers were our main source of help, however, we did utilize AMC staff on a few occasions. During these loops sign checkers carried new signs that were going to be hung on that loop but along the way checked all signs on said route to document conditions to ensure that existing signs and posts were in relatively good shape (legible, sturdy, accurate). The 30 loops averaged around 8 miles; although a couple were seriously long (12+ miles) so if the sign checker averaged 2 miles an hour, that’s 4 hours of hiking, not including any stops or drive time to and from trailheads. Volunteer labor is free, but if you take the state of New Hampshire’s recommended 2016 volunteer labor rate of $23.07 (NH DRED) you’re looking at about $100+/day on average. On the most basic level of our annual sign efforts, if we look at just the average costs mentioned above for a typical year; the materials, sign manufacturing, sign condition checks and replacements we’re in the ballpark of $4400/year that we invest into our signage.

We try hard to keep our AMC trail signs in good shape. As trail builders and maintainers we understand the importance of a good, quality sign and how important it is to have reliable directions on these trails in the middle of the woods (hey, we hike on them too!). At the same time keeping tabs on hundreds and hundreds of signs is no easy task and some that need to be replaced might slip through the cracks every now and then. Please bear with us and all the other trail clubs and land agencies if there seems to be signs not quite up to snuff, contact us if you see something awry. And please don’t write or etch into the signs, it simply makes the sign look worse and more likely in need of replacement.

Map credits: Forest and Crag, by Laura and Guy Waterman

Additional reading: The 4,000-Footers of the White Mountains, by Mike Dickerman and Steven D. Smith