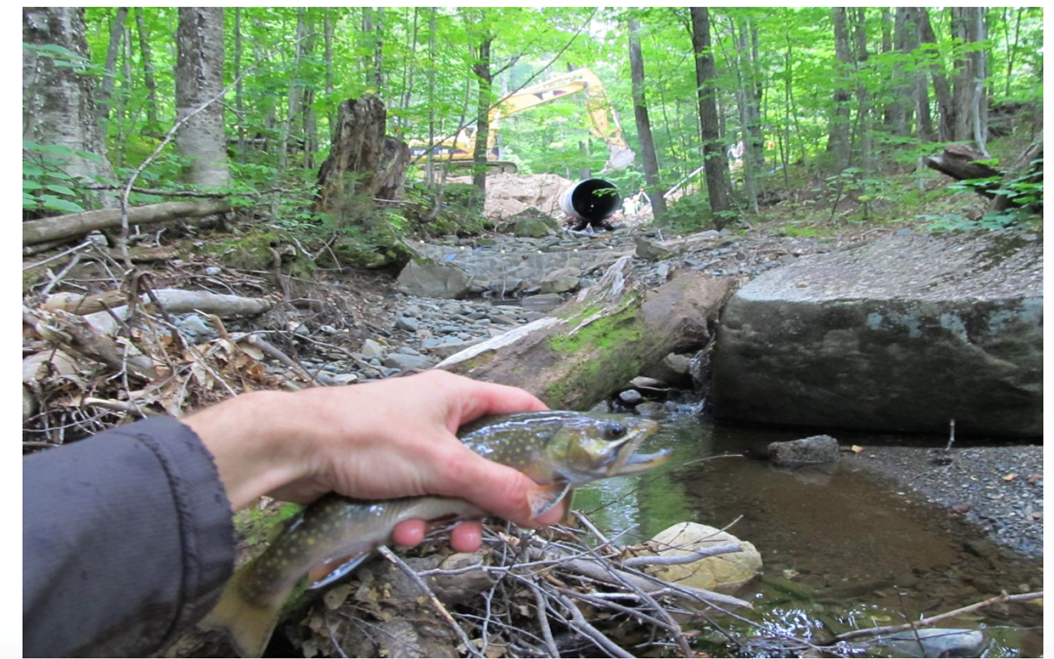 Maine’s native Eastern Brook Trout – the canary in the coal mine for the ecosystem.

When you think of forests you might not think of fish, yet native Eastern Brook Trout and endangered Atlantic Salmon are signature species of the North Maine woods. AMC’s Maine Woods Initiative has been working to protect and enhance brook trout and salmon habitat, one of the largest fisheries restoration projects in the nation reconnecting the mountains of Maine to the sea. The centerpiece of AMC’s conservation efforts has been the watershed of the West Branch of the Pleasant River – one of the state’s most valuable native brook trout fisheries, described as an “ecological treasure trove” by a retired Maine Department of Inland Fisheries and Wildlife (MDIFW) biologist.

How is it all connected?

Forest health impacts water health, and that, in turn, impacts fish habitats. Maine is the last stronghold of brook trout in the US – trout are the canary in the coal mine for the ecosystem. The fish restoration work also benefits an endangered species, the Atlantic Salmon – a fish that in its lifetime will swim to Greenland and back to the Maine Woods.

Step one: removing the culverts that are impeding the passage of fish through the forest.

The first part of AMC’s work has centered around connectivity – removing culverts for fish passage. The second part is restoring ecosystems that have sustained 30 years of damage. Historically, timber companies bulldozed the rivers to clear them for logging, causing detrimental effects on habitats. With the assistance of tree growth, organic material is now returning the waterways. 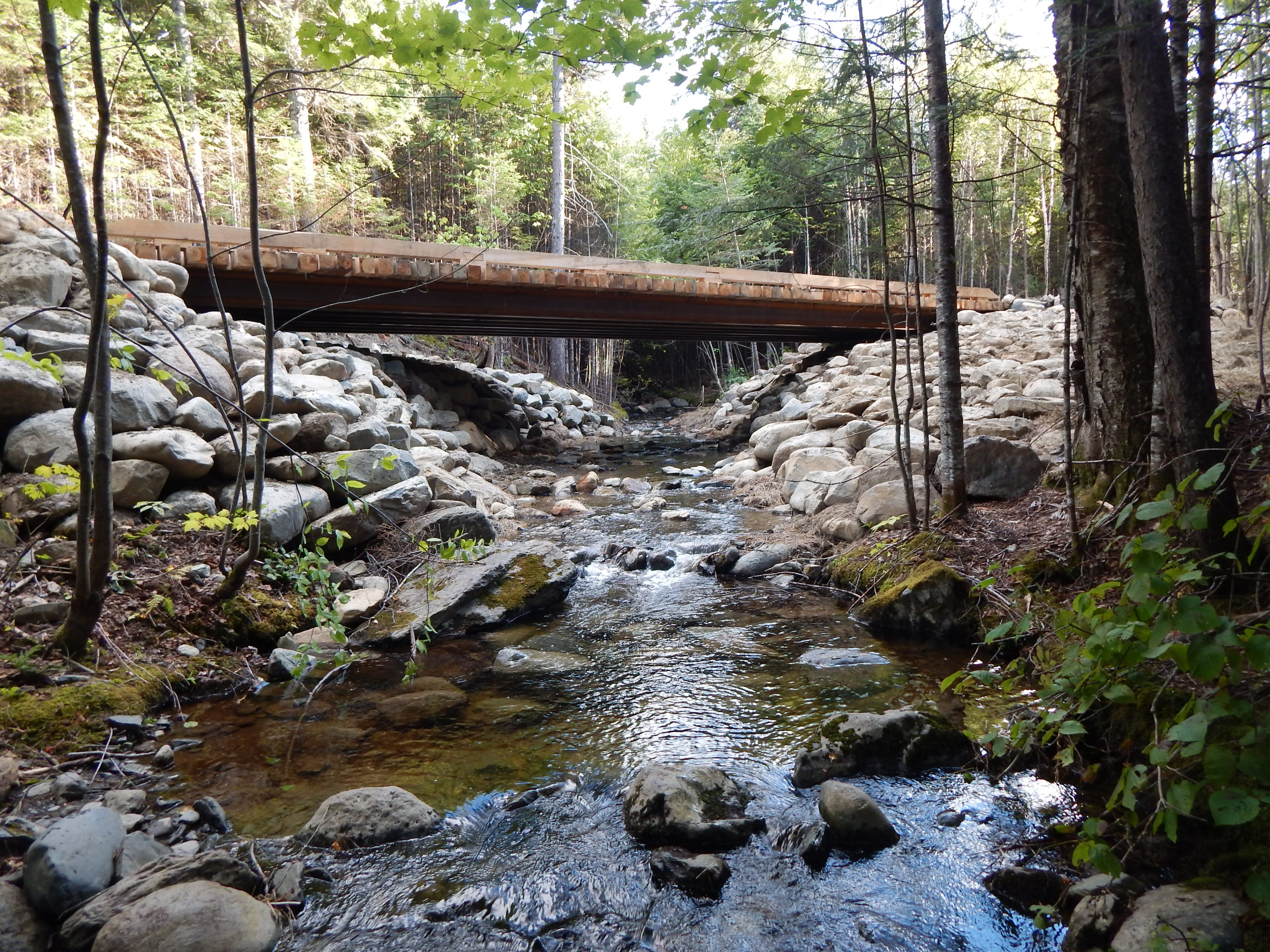 What are the results?

In 2019 alone, AMC has completed five fish passage projects reconnecting 9.75 miles of stream habitat in the upper reaches of the West Branch of the Pleasant river watershed. All of the projects were located in the middle of the Katahdin Ironworks Ecological Reserve and combined three culvert removals and decommissions with two bridge installations to complete the restoration of a significant portion of the vibrant trout habitat found in that area. These five projects were the last in a series of fish passage installations that has restored ecological connectivity to 12,000 acres of AMC’s Maine Woods Initiative property.

The team uses electrofishing as a survey method to sample fish populations to determine abundance, density, and species composition.

To date, in collaboration with both government agencies and other conservation organizations, we’ve: 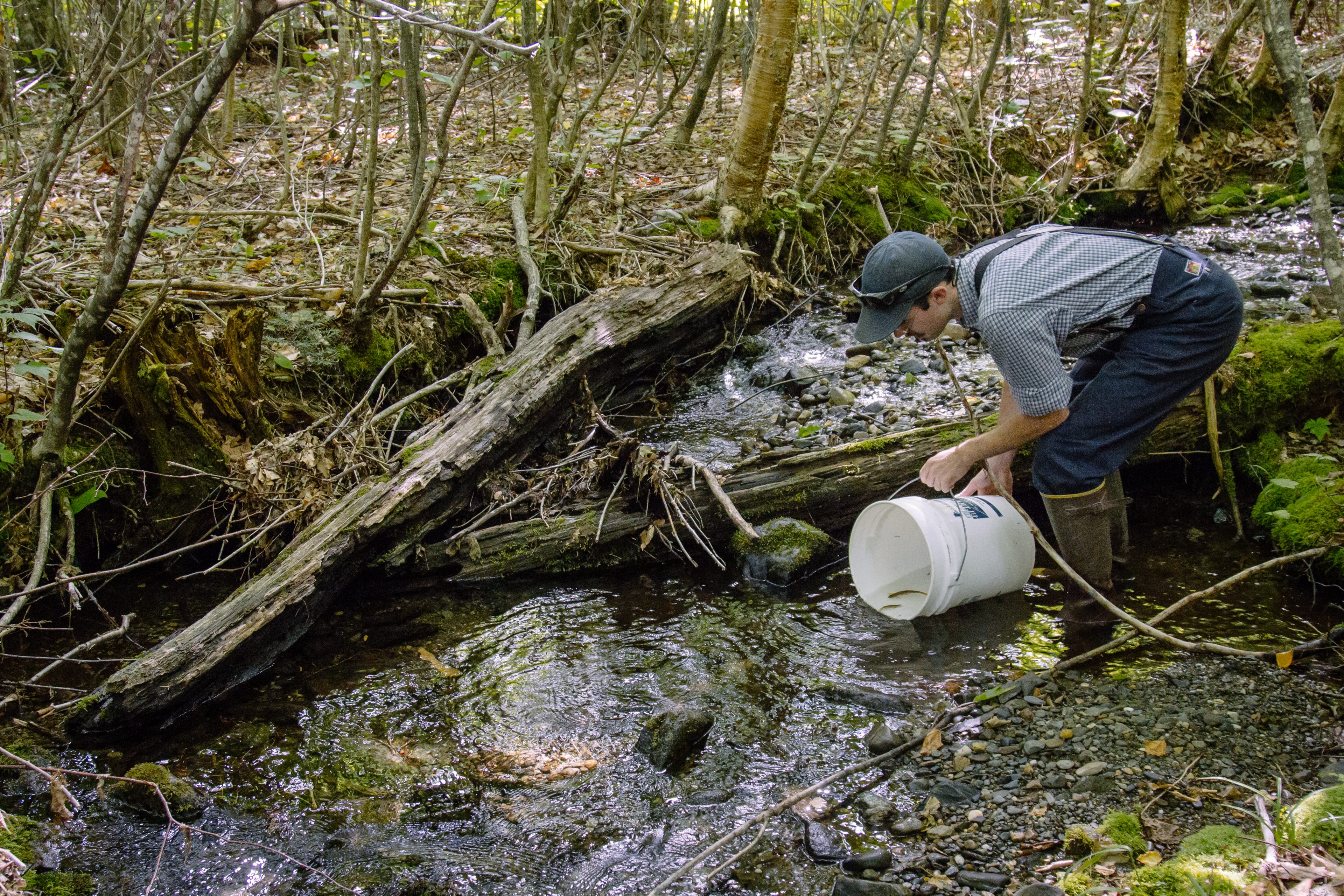 Garrett English.Steve Tatko (Director of Maine Conservation and Land Management) participating in the ecological restoration method of catch and release.

In 2016, the Maine Department of Marine Resources or DMR began planting Atlantic Salmon eggs in the West Branch of the Pleasant River following the installation of the Howland bypass which enables sea run fish to reach Gulf Hagas for the first time in 150 years.

DMR staff had to suspend egg planting operations in the West Branch over the winter of 2020 due to the presence of sea run salmon females and their offspring over-wintering in the river above Silver Lake! This is the first known instance of this in over a century! The females were likely hatched from planted eggs in the river since 2016 but have left to go to sea and since returned. 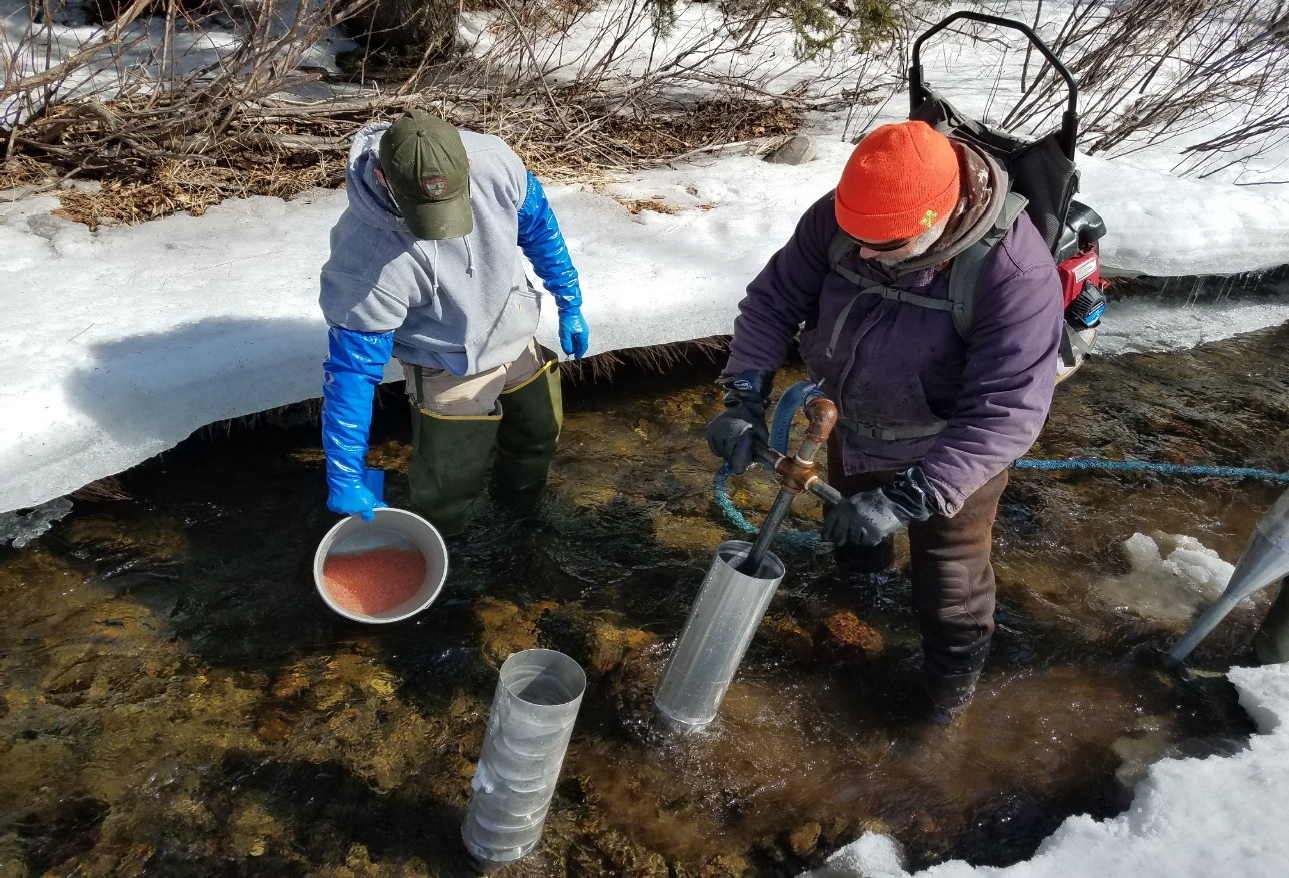 The process of planting Atlantic Salmon eggs in the Pleasant River.

In late March of this year, AMC’s Steve Tatko, Director of Maine Conservation and Land Management, assisted DMR staff with the first egg planting operations on the Middle Branch of the Pleasant River. Over three locations 170,000 eggs were planted in the Middle Branch which should be hatching in late April early May.

AMC is well positioned to aid in this exciting return of Atlantic Salmon to the critically important habitat of interior Maine. Our conservation acquisition work through the Pleasant River Headwaters Forest is actively piecing together one of the most important watersheds necessary to sustain salmon in the eastern United States. This truly is a global conservation project as the Atlantic Salmon that spawn in the Penobscot Watershed spend the other half of their lives off the coast of Greenland.

If you’d like to learn more about our fish restoration work or contribute to AMC’s Maine Woods Initiative, check out our Pleasant River Headwaters Forest initiative.