An Abecedary of Rocks and Ice 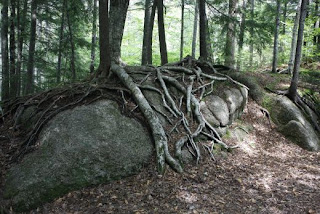 An alphabetical introduction to the geology of the White Mountains

The research for Dykstra Eusden’s recently published book on the geology of the Presidential Range was built up over time. For more than a decade, the Bates College professor set up geology field camp near Randolph, N.H. “Understanding geology,” Eusden says, “means understanding what you see in the field.” Rocks in roadside cuts, along trails, or on summits “give you the beginning of a story.”

Geology at its best, like great literature, touches deep and fundamental stories about existence and time. In his classes, Eusden makes the length of a room stand for the age of the earth, then describes different epochs in geologic time as he walks across the room. “The Presidential Range doesn’t even appear until I’m four-fifths of the way across the floor,” he says. “My nose is about a centimeter from the wall when mammals first appear on earth.” Geologic time is “so immense it’s almost unfathomable.”

Telling the story of geologic time through the rocky summits and rounded river valleys of the White Mountains fascinated Eusden’s students and his children. In fact, his two sons joined him in Randolph from young ages. The boys became so good at recognizing different types of rocks that they could teach new field staff.

This alphabet is drawn from Eusden’s book, The Presidential Range: Its Geologic History and Plate Tectonics; and an earlier regional guidebook, Roadside Geology of Vermont and New Hampshire, by Bradford Van Diver. Each letter tells a short story of the geology of the White Mountains.

Acadian. The name given to a mountain-building phase between 335 and 380 million years ago that resulted in most of the metamorphic rocks in New Hampshire, including some in the White Mountains. The Acadian mountain-building phase also is considered by some geologists to coincide with the collision of the ancestral North American and African continents.

Batholith. The White Mountain batholith is a large “igneous intrusive body,” meaning that the rock within it was formed by lava or magma being squeezed upward from the planet’s hot mantle.

Cirque. A U-shaped amphitheater formed by a glacier at its head, with steep sidewalls. Known locally as gulfs or ravines. See Tuckerman Ravine, Huntington Ravine, Great Gulf, Madison Gulf, and Gulf of Slides.

Erratic. A large boulder, not native to its current, often unlikely, location, and transported there by glacier. See the “rocking” erratic on Mount Potash or the curiously balanced Glen Boulder on the western flank of Pinkham Notch.

Freeze-thaw cycle. Boulder fields are created by the cycle of freezing and thawing, breaking apart even hard granites and schist. The sharply pointed peaks of Franconia Ridge are the result of their glacially rounded peaks being shattered and sharpened by the freeze-thaw process. 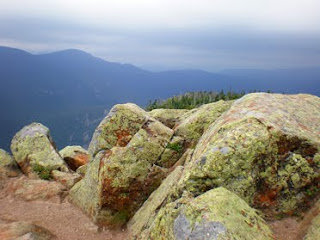 Hitchcock. The name of the long narrow lake formed by glacial melt about 15,000 years ago. At its longest, Lake Hitchcock extended 200 miles from Connecticut to St. Johnsbury, Vt. The Connecticut River now runs through the valley.

Ice Age. The Ice Age in North America began more than 2 million years ago and ended only about 6000 years ago. The White Mountains show the marks of the most recent stage, the Wisconsin glaciation.

Joints. In geology, joints are fractures in rocks. Basalt dikes were formed when magma pushed into these joints.

Kinsman Notch. Kinsman Notch contains several points of geologic interest, including Agassiz basin, named for one of the first scientists to understand that massive ice sheets once covered the northern hemisphere, and Lost River Gorge, sculpted by glaciers.

Littleton schist and quartzite. The tough rocks that form the steep summits of the Presidential Range come from the complex Littleton formation, “igneously metamorphosed” rocks. Also see Glen Ellis Falls, which tumbles over an escarpment of hard Littleton schist.

Moat Mountain. Moat volcanic deposits derive their name from this mountain; a good place to view the rocks that once formed a continuous blanket over central New Hampshire thousands of feet deep.

New Hampshire. According to some plate-tectonics geologists, New Hampshire is “exotic terrain”—a former slice of the continental crust that once belonged to what is now Africa. It became stuck to the edge of the North American continent during the creation of Pangaea and, like all immigrants, became modified in the process.

Pangaea. The super-continent that existed at the end of the Paleozoic era. Pangaea contained all the continents we know today, fit together like a giant jigsaw puzzle. Pangaea began to break up during the Triassic period, about 200 million years ago. The Connecticut River Valley was formed during an early part of the continental stretch.

Quartz. When glaciers sliding over the White Mountains scratched the rock in the direction of their travel, scratches remained in the quartz, a hard mineral embedded in the granite rock. See Edmonds Col between Mount Madison and Mount Adams.

Sedimentary layering. Marine sediments—the remains of small animals and plants, and the silt of an ocean floor—were laid down over hundreds of millions of years. These layers were altered under intense pressure and heat and became the basis of many of the rocks found in the White Mountains.

Talus. The large talus slope at the base of Cannon Cliff is an excellent example of rockfall debris accumulation resulting from the freeze-thaw process.

Upland. The New England upland is a broad plateau that rises gently inland from the sea. The White Mountains rise abruptly from this plateau.

Volcanoes. Volcanic action occurred at several crucial points in the formation of New England and the White Mountains: during the continental collision between what would become the North American and African continents; and again about 175 million years ago, when the continents split apart.

Wisconsin glaciation. During the high point of the Wisconsin glaciation, about 20,000 years ago, ice sheets reached down to the current site of New York City and into Long Island Sound. All of New England lay buried under a mile or more of ice.

eXfoliation. Exfoliation is a type of jointing, sometimes described as the slow peeling of a rock onion. See Whitehorse and Cathedral Ledges for good examples of exfoliation.

Young geologists. On the way to the White Mountains, young geologists and their families may also enjoy touring the glacial boulders at Polar Caves Park in Rumney, N.H.; collecting minerals at Ruggles Mine in Grafton, N.H.; or visiting the Montshire Museum in Norwich, Vt., where an exhibit on “The Dynamic Earth” runs through November.

Zealand Notch. An example of an ice-gouged valley, formed during the Wisconsin glaciation.

Learn more
– The Presidential Range: Its Geologic History and Plate Tectonics by Dykstra Eusden. The booklet includes a detailed geologic map of the range. Professor Eusden is donating all proceeds from the sale of The Presidential Range to the Bruce Bouley Fund for geology field studies.
– Roadside Geology of Vermont and New Hampshire by Bradford Van Diver is no longer in print, but is still available for purchase.
– More information on plate tectonics from the USGS and on general topics in geology from the University of Tromso, Norway.