This story was originally published in the Summer/Fall 2020 issue of Appalachia Journal. 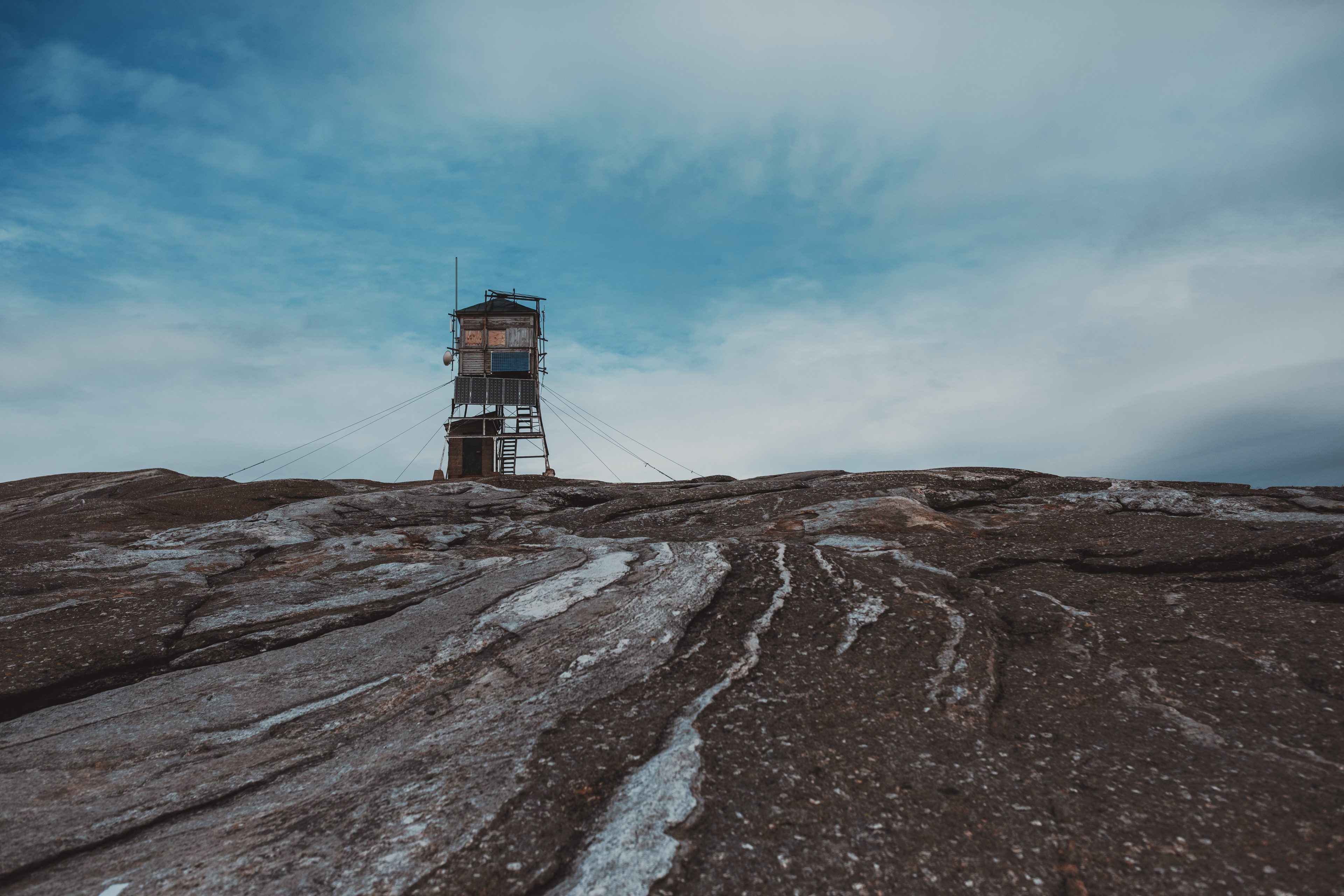 The dog and I were climbing up the Manning Trail on the way to Firescrew Mountain. We were somewhere between the trailhead and the first view when we came upon about a dozen and a half young teenagers resting on rocks. It looked like a year-end class trip with the usual divisions of temperament. Some seemed forthrightly cheerful, some resigned, and a few already grumpy. There were bottles of water and lunch bags, and I thought I glimpsed a couple of hiking poles, which were actually GoPro Selfie Sticks.

This route up Firescrew and over Mount Cardigan, in central New Hampshire, is so familiar to us it resembles a set of steps we ourselves have laid down: the log crossing before ledges begin; the slight rock hop before the first view; the “chute,” which is worrisome when wet (as it was on this late spring day); the ridge where vistas follow across. We come as often as we can—5.6 moderate miles we plan to grow old with.

This route up Firescrew and over Mount Cardigan, in central New Hampshire, is so familiar to us it resembles a set of steps we ourselves have laid down..

The teens seemed in no hurry as we passed, and the dog followed me with reluctance. She would much have preferred to stay with them; some were already opening their lunches, which is her criterion for a good trip.

—Hey, can I take a picture with that dog? a boy called, in an accent I didn’t recognize.

—Where are you headed? I said.

—Up this . . . Hey, what’s this place called? The girl who answered wore fist-sized hoop earrings that, under the circumstances, looked a little hazardous. She too had an accent I did not recognize.

We’ve never been here before, he said, holding out a map. Could you tell us how far we’ve come?

By the time they caught up to us at the first view, a few were panting, and a sense of diminished good humor was in the air. Emerging from their center, a young man appeared to be in charge. He approached politely.

—We’ve never been here before, he said, holding out a map. Could you tell us how far we’ve come?

Is there anything so pleasant, so benevolent, so whole-hearted in this life as giving advice? What quantities of it we have to offer! Solicited is preferable, but any kind will do. Here was an outright gift to an advisor: a group without much experience on mountains, and probably not so much in life, either. I showed him where we were—about one-third of the way along the loop—and then proceeded to the satisfying part of the interaction.

—These rocks get a little rough when it’s been raining, I began. I was warming up and ready to hold forth on the hazards of wet rock when he interrupted.

—The kids are nervous, he said, sounding a little nervous himself. —It’s their first hike. Maybe we’ll take a vote about turning around.

Turning back was the best choice—and yet, every once in a while (to my surprise), I manage to restrain myself from clarifying it.

A metaphorical hill becomes a mountain for many reasons, and the smallest hike can have its traumas. If they were inexperienced and already unhappy, it spoke badly for the challenges ahead. Turning back was the best choice—and yet, every once in a while (to my surprise), I manage to restrain myself from clarifying it. Maybe it’s because the best advice is the most subtly offered. Instead, I agreed that voting was a good idea.

We left them to their democratic process and continued over a small pool, up the chute across the cloud-driven Firescrew ridge and down into the forest before the final scramble to Cardigan. Walking this route always feels like visiting beloved relatives who can’t travel. Every cranny is a family reunion. 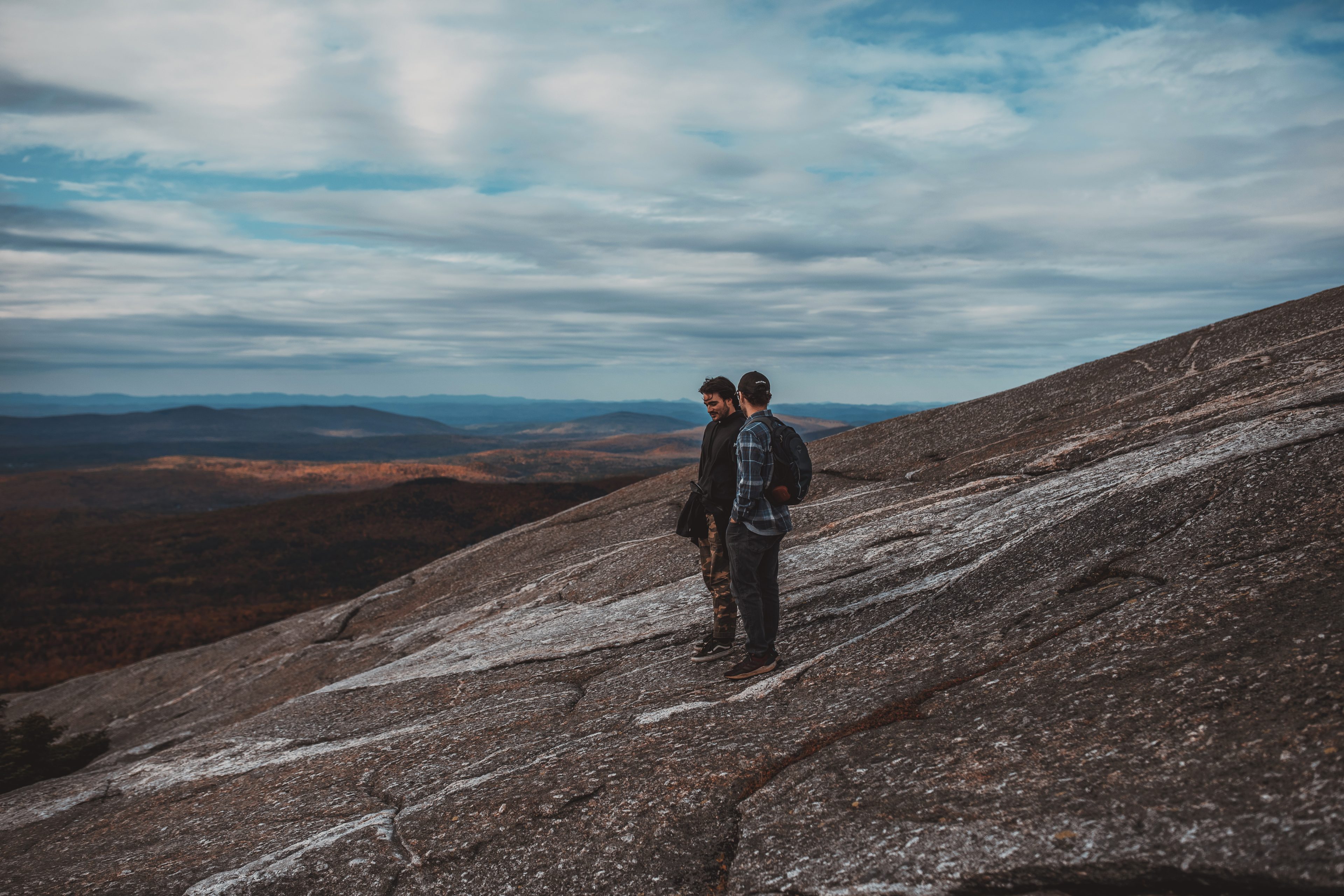 Paula ChampagneHikers standing near the summit of Mount Cardigan.

After a while, I began to worry. Some of the markings were a little hard to see. Also, their leader might not have realized that yellow blazes on the route turn white. Years ago, I once ended up on an unpaved road in Orange, New Hampshire, as the sun was setting, instead of back in the Appalachian Mountain Club parking lot. If I had given the advice I’d wanted to, and if they had taken it, turning back would have been a prudent decision, based (one could modestly say) on excellent consultation.

But on the final push to the Cardigan fire tower, we heard voices behind us: gaining, boisterous, triumphant voices.

But on the final push to the Cardigan fire tower, we heard voices behind us: gaining, boisterous, triumphant voices.

—Hey, can I take a picture with that dog? one called familiarly.

Their leader was at the head, high-fiving each arrival. I turned back to congratulate him. They had taken the right vote in the end.

—Made it, I said. —Last trip of the school year?

He took a minute to explain. These hikers were new to the country, just arrived, and enrolled in a program that prepared young immigrants for life in the United States. They had little knowledge of local geography, and none of each other. The members of this particular group, together for the first time, had relocated from Bangladesh, Ethiopia, and Haiti.

These hikers were new to the country, just arrived, and enrolled in a program that prepared young immigrants for life in the United States.

—Remember Haiti, 2010? he said, shaking his head in wonder. —One of our students was in class when his mother just happened to call him home early, ten minutes before the earthquake struck. He was the only one in the school who survived.

The boy sprawled in a circle of his new compatriots on the low, fire-scarred summit. After an elevation gain of 1,900 feet, they were pretending to gasp in the pretend high altitude, opening potato chip bags, hoisting GoPros, enjoying themselves. The dog was among them, now, in lunch-bag heaven.

I forgot how much there is to learn on a mountain.

Among them, also, were life experiences I would never understand. The dog and I watched from a short distance, which was also a long distance. Knowing every rock of the route so well, and offering advice so busily, I’d assumed that I also knew who we were offering it to. I forgot how much there is to learn on a mountain.

Elissa Ely is a Boston-based psychiatrist and writer.