6 Knots Everyone Should Know

The following is an excerpt from AMC’s Mountain Skills Manual.

Once you have found the perfect site for your camp, you have the task of putting together your tent or sleeping shelter. Before you set up, it is essential to know a few knot-tying skills that will help you when you’re getting your camp ready. Ropes are perhaps the most versatile piece of gear you carry in your backpack. They can help you build a shelter, negotiate difficult terrain, protect your food against opportunistic wildlife, repair equipment, or be used in a first-aid situation. But a rope alone is not useful if you don’t know how to use it. First of all, it is essential to understand that not all knots are the same, although all knots belong to a few families. These families are:

An overhand knot is perhaps the easiest knot to tie and to remember. Simply take the running end of the rope, make a loop, and pass the running end through the backside of the loop. There you have it! You just made a stopper knot called an overhand. This classic pretzel-shaped knot is one of the first most people learn, and it would be the first knot a beginner would tie if someone handed them a rope and said, “Tie a knot.” We’ll look at three families in this chapter, loop, hitch, and bend.

Overhand on a Bight

Similar to the overhand knot, this knot is performed with a bight. Begin by creating a bight, which will be known as the running end. Use the running end bight to make a loop, then pass the running end through the backside of the loop, and pull until the knot is taut. You now have a loop known as an overhand on a bight.

This knot does not have to be tied at the end of a rope so it is useful in many different situations. You can clip a carabiner to it to quickly connect it to another object—such as a food bag in a bearproof food system. 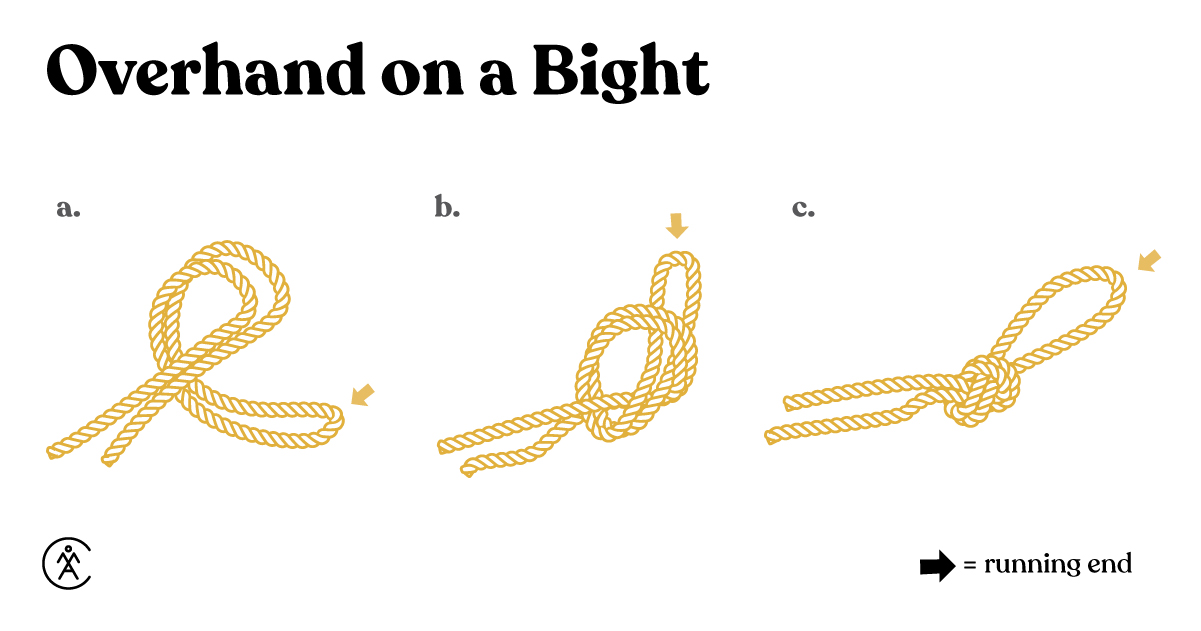 Bowline
The bowline is perhaps the most popular camping knot, as well as the most difficult to learn. Do not try to tie this knot without using an anchor point to tie the knot to—tying this knot to an imaginary object will only confuse you. Second, unless you want to learn to tie this knot to yourself, always face the object you want to tie the bowline to. Knot-tying is hands-on learning and must be done in the exact context you’ll use the skill. To tie a bowline:

The bowline is a popular knot because it creates a loop knot around an object, thus securing one end of the rope to that object. The most important characteristic of the bowline is that it can be put under a lot of tension and still be easy to undo by flipping its loop—very useful when setting up a shelter, such as the ridgeline of a tarp. 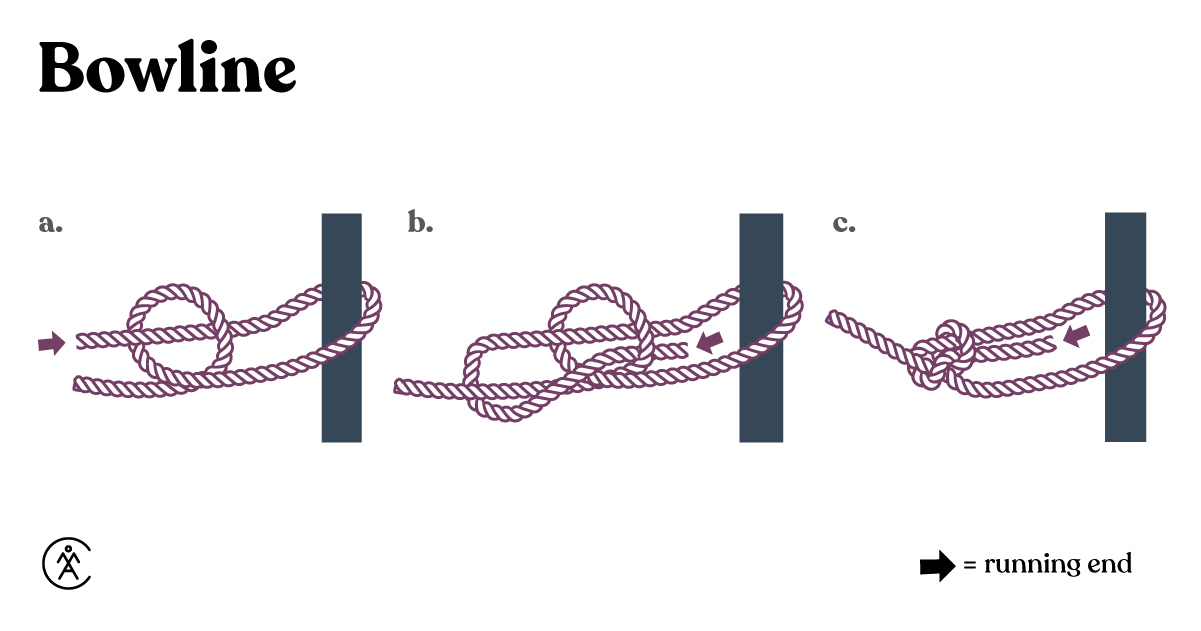 Trucker’s Hitch
The trucker’s hitch is a compound knot that functions as a kind of pulley, giving you a 3 to 1 mechanical advantage (meaning the puller can pull three times his or her weight), although rope-on-rope friction might reduce this to 1.5 to 1. Nevertheless, the trucker’s hitch is quite effective at creating tension on a rope, such as when setting up a shelter.
Note: Make sure that one end of the rope is already secured to an anchor point, or attached to a tarp or tent fly, and that tension can be created when completing the trucker’s hitch. 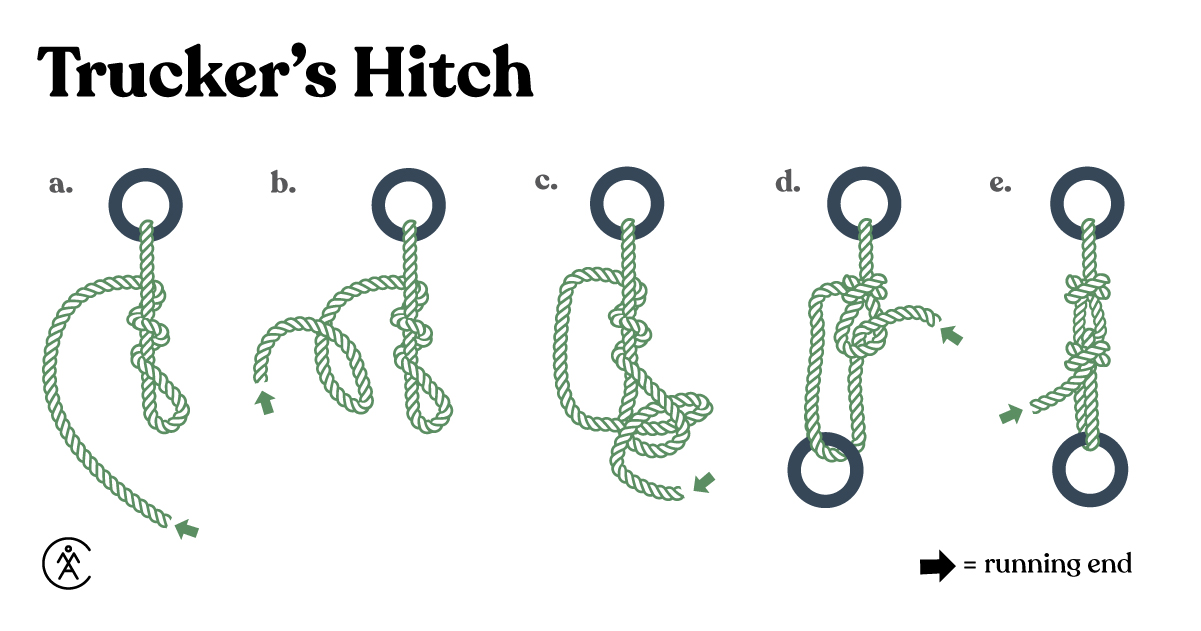 The clove hitch is another very useful knot that can be created anywhere along the middle part of the rope. Like any other good hitch, the knot will need to be cinched around an object to keep its form. Use a trekking pole to practice this knot.

Now, you have two strands of rope that are firmly secured to an object. This knot is very useful when setting up a lean-to-style tarp. 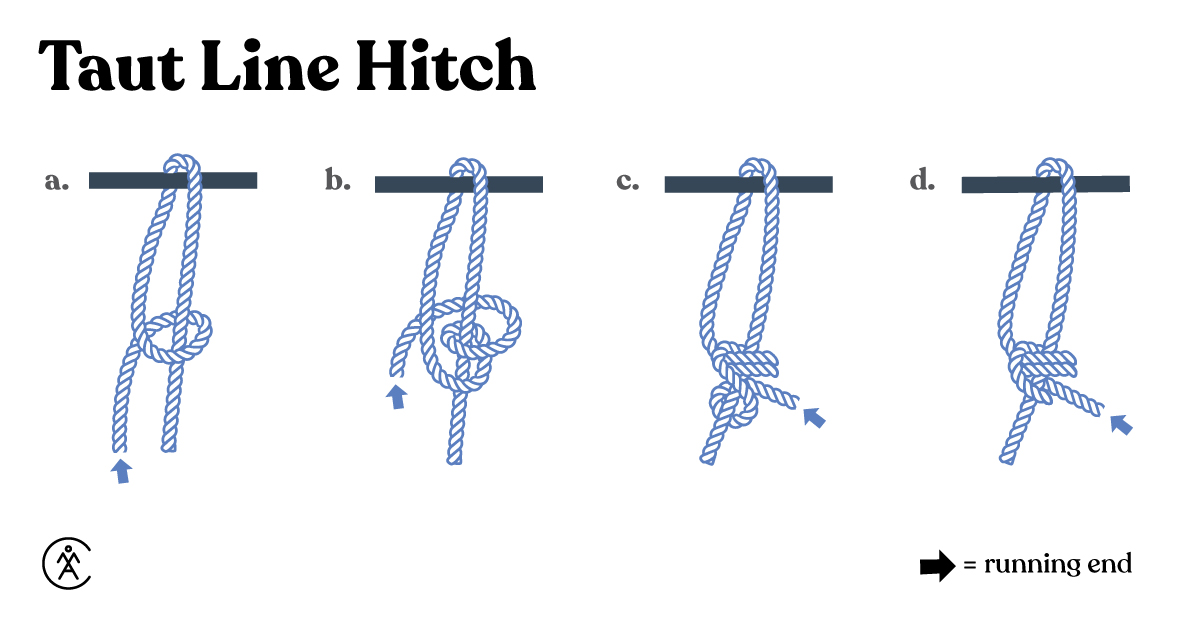 The square knot is the easiest knot to screw up. Many people trying to tie a square knot end up with a granny knot, which is quite different and quite useless. While the square will hold two ends of rope together, the granny knot will roll on itself and most likely come undone. The square is often used to tie cravats in first aid or to join two ropes or cords, such as when extending a rope for a shelter.

To remember this knot, memorize this catch phrase: “Left over right and right over left.” 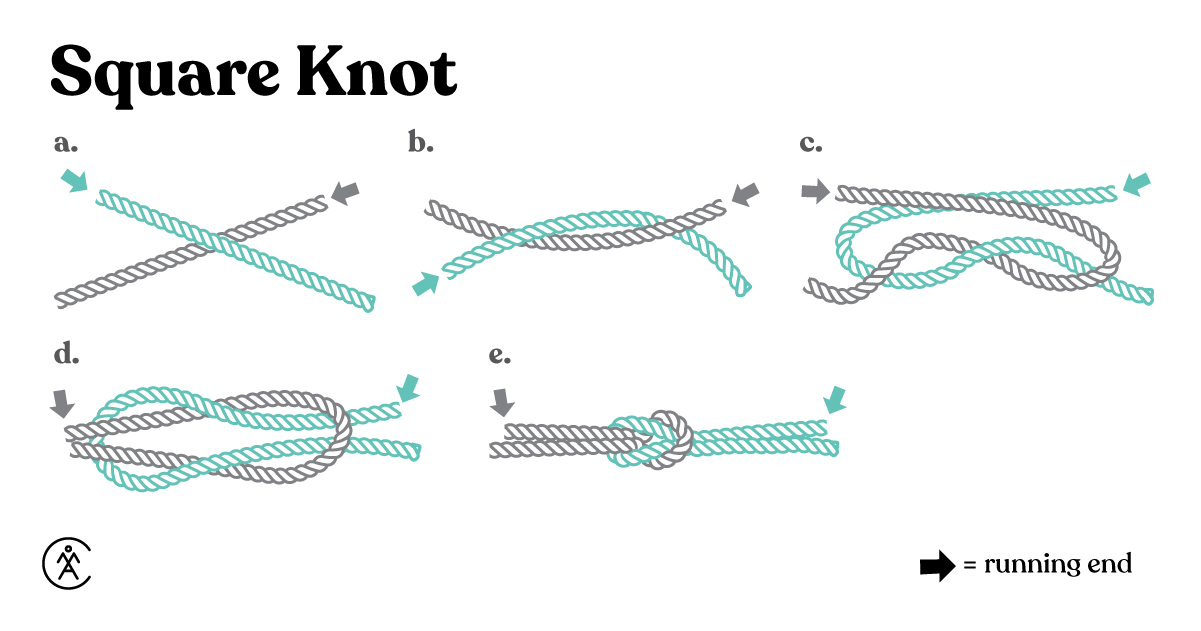