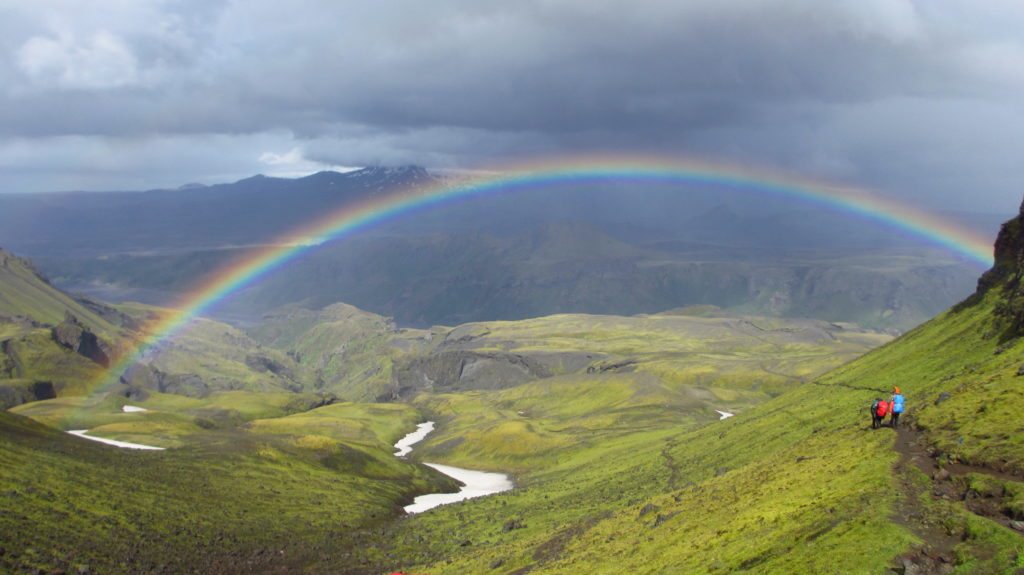 John RogersIceland: A rainbow heralds a welcome respite from the rain on the Laugavegur Trail

As Jo moved south on the Laugavegur trail in Iceland, the rain began moving off, slanting columns of water drifting east.

The sun reappeared, but more rain could be seen upwind, sweeping slowly over the mountains. For now, things were fine, as a massive crescent rainbow filled the sky to the northwest. It was day six of an adventure in these wild mountains, just a couple degrees south of the Arctic Circle.

Jo thought back to Day 1, when she met the rest of her group near the old harbor in downtown Reykjavik. Alfi, the group’s guide and leader for the next ten days, greeted them. The twelve group members were travelers from Europe and North America.

Departing Reykjavik, Iceland’s wilderness greeted Jo’s group with driving, horizontal sheets of water. After dropping gear at a mountain hut, the group spent the afternoon hiking. The walk reminded Jo of a day in the White Mountains of New Hampshire last June.

In the Whites, Jo joined other adventurous souls for the AMC’s Mountain Leadership School (MLS). She learned, during that experience, good rain gear can keep you comfortable (and safe). Jo used the MLS equipment checklist to select her gear for the Iceland trek. That first day of hiking in Iceland called for a base layer, fleece mid-layer, and hard shell. Having experienced these conditions before, she was comfortable and confident in her gear choices.

However, not everyone was doing as well. With Alfi leading the way, the group hiked around the side of a large hill, straight into the full force of the wind. Jo glanced behind her, to check on those in the rear of the group. She noticed two hikers, Kay and Ben, at a standstill 50 yards back.

Jo shouted to the group, turned around, and hiked back to Kay and Ben. Ben was struggling with Kay’s rain gear. That morning, Kay had commented she liked using a poncho in the rain, because it could double as a pack cover. Jo witnessed the poncho flapping violently around Kay’s head and neck because of the high wind. Kay couldn’t see with the fabric flapping in her face, and worse, she was fully exposed to the pelting rain and wind.

When Jo reached the pair, she took off her pack and located her what-if bag. Among other items, the bag contained 50 feet of paracord. Using her multi-tool, Jo snipped off a length of cord. Working together, Ben, Alfi and Jo secured the poncho in place around Kay and her pack with a quick slip knot. The four trekkers exchanged smiles of success as water dripped off their chins.

As the group hiked back toward the hut, Jo’s thoughts returned to her time at the Mountain Leadership School. She had learned so much during the program – from the MLS instructor team, fellow participants, and the course materials. After dinner one evening, a member of her MLS group reviewed the items he carried in his what-if bag. Since then, Jo carried one too. Today it had been an invaluable resource.

Several days later, as the group rounded a bend in the trail, Jo saw a substantial river ahead, with no bridge in sight. This river wasn’t like the other water crossings; the group had easily forded those wearing water shoes or sandals. This was a braided maze of fast moving water and wide gravel bars.

Jo watched as two hikers, bracing themselves with trekking poles, moved carefully through the fast-moving water channels from one gravel bar to another. Jo felt a slight thrill.

Her excitement was tempered when she realized this method of crossing wasn’t going to work for Vivian, a fellow group member. Vivian’s consistently positive attitude on the trail lifted everyone’s spirits, despite the rain each day. Despite her sunny disposition, it was clear Vivian found the group pace challenging at first. Noticing Vivian’s struggles with the pace, Jo responded by forming a quiet partnership with Alfi, their guide. Alfi set the pace at the front of the group while Jo helped at the rear. Together, they established an efficient pace and managed the group members’ wide range of abilities.

Having Vivian cross the fast-moving river alone was too great a risk. If she fell, Vivian would struggle to recover. Jo once again thought back to her time at the Mountain Leadership School and the water crossing techniques learned during that experience.

As the group sat down to change from boots to water shoes, Jo asked another group member, Jason, if he would cross with her and Vivian. Jason consented, and he and Jo moved left and right round Vivian. They unfastened hip belts and sternum straps, and linked arms with Vivian. As a team of three, they waded into the river: six legs and two hiking poles working together. The water was icy cold, but the team moved steadily toward the opposite bank.

After a few minutes of concentrated effort, Jason, Vivian and Jo were sitting on the far side of the river, drying feet and putting on boots. Jo was pleased by their success. There were five miles of trail remaining before the group reached their final mountain hut of the trek, then two more days of hiking in the Thórsmörk valley before returning to civilization.

As the group got ready to move on, Jo realized, with a deep sense of satisfaction, that on every day of the trek, she had applied learning from her Mountain Leadership School experience. Attending the MLS program had been one of the best decisions she had ever made. Jo wasn’t sure where she would travel for her next wilderness adventure, but wherever she went, she wouldn’t be alone. She would carry the knowledge imparted by the MLS program with her.

John Rogers is a hike leader and trail maintainer with AMC’s Delaware Valley chapter. John attended MLS in 2014, Advanced MLS in 2015, and joined the MLS instructor team in 2016. In summer 2015, he traveled to Iceland’s Landmannalaugar region, hiked the Laugavegur Trail, and climbed to the new craters Magni & Modi on the Eyjafjallajökull volcano.

John Rogers is a hike leader and trail maintainer with AMC's Delaware Valley chapter. John attended MLS in 2014, Advanced MLS in 2015, and joined the MLS instructor team in 2016. In summer 2015, he traveled to Iceland's Landmannalaugar region, hiked the Laugavegur Trail, and climbed to the new craters Magni & Modi on the Eyjafjallajökull volcano.