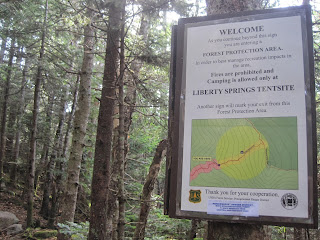 The origins of the AMC caretaker program lie in the ‘backpacking boom’ of the 1960s, when people en masse flocked to backcountry areas. Our AMC shelters, most of which had existed since the early 1900s without incident, were at the epicenter of this use. Shelters (the concept of a ‘campsite’ was relatively new following the advent of lightweight backpacking equipment post-war) became areas known for overflowing trash pits, improper human waste disposal, and trees decimated up to a quarter mile in radius as hikers scrounged for firewood.

In 1970 AMC started the pilot caretaker program at Liberty Springs, and the results were incredible. The impact of the caretaker program was discovered to be twofold: hands-on stewardship and rehabilitation of the resource, but also education of backcountry visitors on what they could do to be their own stewards. Or, in the words of that first Liberty Springs Caretaker:
“The role of the caretaker is a central one. Although he works on trails, transplants trees, and assigns tentsites, his primary job is education. Very few people who hike in the backcountry consciously seek to destroy the environment, but often, carelessly and thoughtlessly, they do…With a caretaker at the area, however, hikers can be reminded of their role in preserving the environment.”
While the nuances of the way we explain the caretaker program have advanced in the forty plus years since that first caretaker at Liberty, the core of what we do has stayed the same: caretakers operate in that nexus between people and wilderness, between hikers and the natural resource.
That vital role became apparent in the wake of the government shutdown, when AMC was ordered to close our backcountry campsites in the White Mountain National Forest. This closure order meant that our sites were unstaffed during Columbus Day weekend, one of the busiest weekends of the entire summer. One of the highest-volume nights in recent record for Guyot campsite was on a Columbus Day Saturday, with 92 people (2009). With good weather on Columbus Day weekend 2013, the crowds came again.
Without a caretaker presence, many of the same habits expressed themselves. Fire rings sprung up at half of Liberty’s tent platforms. Campers placed themselves improperly throughout sites, blocking access to water (at Guyot) and trampling vegetation (at Garfield). One visitor was stopped (by a Good Samaritan) from burying their leftover food and trash. Tents sprawled along the Bondcliff Trail and into drainage ditches, as there was no caretaker to assist with the complicated arrangement of packing 80 plus people into tiny Guyot. In the long term, these habits would amount again to the over-use of the 1960s, with incredible lasting resource damage.
A lot of what transpired could have been avoided, as most of it was lack of information or direction about the correct thing to do. Or, in the words of a former caretaker who witnessed firsthand much of the Columbus Day crowds, ‘People don’t know the protocol. People see the sign, sometimes know what it means, but they don’t know how to apply it.’ The need for education and gentle guidance, the original justification for the caretaker program in 1970, continues to be relevant and necessary in 2013.
Trails