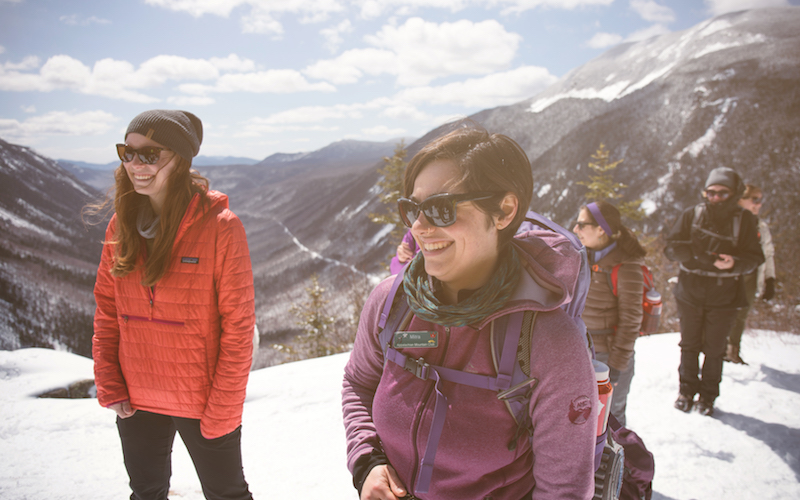 It’s a cold, sparklingly clear day in March, and the White Mountains are filled with hikers, skiers, and snowshoers, each leaving distinctive tracks in the piles of late-spring powder. It seems like everyone is chattering about the weather; each group we pass has something to say about the glorious conditions. We’re on our way to AMC’s Carter Notch Hut, and Nineteen-Mile Brook Trail is busy. Everything is going swimmingly, except for one thing: I really have to pee.

Ordinarily, this isn’t a problem, but the snow banks are high, and I know it’s going to take me some time to find a spot off-trail. Announcing loudly to the group, “I’m going to take a bio break,” I remove my snowshoes from my pack, strap them to my feet, and set out to find a secluded spot behind some trees. My guides, Katie Burkley and Mitra Karimian, continue up the trail as I dip out of sight.

This is an everyday occurrence, such a normal thing. But for many female hikers, especially beginners, it’s simply more comfortable to deal with these matters in a group led by a woman. And while women haven’t reached an even gender split across the outdoor industry as a whole, or within AMC, the gap is closing.

Sara DeLucia, who has been supervising AMC guides for more than a decade, has seen an uptick in female guides during her tenure. She puts the current male-to-female ratio at 60/40. “I think it’s really important to have a diverse team,” DeLucia says. “Women offer a unique perspective.”

To better understand what that means in the outdoors, I set out to talk to some of the women who are on the backcountry’s frontlines.

Bio breaks are an obvious place to start. Answering nature’s call is not only a matter of comfort; physical wellness is on the line, too. “Sometimes, women will dehydrate themselves because they don’t want to expose their backsides to the bitter cold in winter,” Karimian says. “When I need to, I’m willing to show them that it’s not too bad and to give them some tips on how to do it efficiently, so they can continue to drink more water and stay safe.”

Jenny Ward, AMC’s Maine Woods business manager and a Registered Maine Guide who has led trips for more than 20 years, says one of the first thing she does with a group of women is to inform them of their options. “A few years back, I was working with a group of teenagers, and a lot of them hadn’t spent any time in the woods at all,” she remembers.

“Having to use the bathroom outside was more fearful to them than any wild animal story you could come up with. Some of these girls would cry. But being a woman, and being able to talk them through that concern, I think that helped.”

While an advanced hiker might chuckle at the idea of being more scared of a pitstop than a bear, it’s important to recognize the empathy necessary in this delicate discussion. Ward chose to approach the topic frankly and openly, without judgment, which helped her teenage participants loosen up and enjoy their hike.

This is an often-overlooked element of wilderness guiding. Guides are there to keep you safe but also to serve as examples and teachers. They need to model how to behave in the wilderness while navigating group dynamics and staying sensitive to every trip member’s fears, neuroses, and emotional needs.

Women are not naturally better at this; many men are just as emotionally insightful as their female counterparts. But as adventure outfitters seek to draw more women into their ranks as staffers and guides, the industry is beginning to grapple with what being a “good guide” means and how well-rounded guides can serve all outdoor lovers—male, female, rural, urban, young, and old.

Despite changing attitudes and hiring practices, women still contend with professional challenges in the outdoor realm. “When we go outside, we bring our culture with us, too,” says Asher Huack, the recruitment and development coordinator for the Wyoming-based National Outdoor Leadership School.

Sometimes, that means bringing a history of sexism and oppression. Huack has observed firsthand the importance of increasing gender and racial diversity in guiding. “We hold our identities with us when we go outside, but we can also transcend these identities,” she says. “That is one of the most amazing things about the wilderness. That’s hard to achieve in other spaces.”

After spending several years working for AMC in the White Mountains, Katie Yakubowski recently began leading fly-fishing trips for the organization in the Maine Woods. “A lot of guys are surprised to see me,” she says. “When you think of a Maine guide, you might imagine an old man smoking a cigar and wearing wool pants. Some people expect that.”

Yakubowski has noticed that some male fishermen ignore her expertise, choosing to direct questions to her male co-leader. “Last year I had a guy ask me what fly to use, and I told him which one would work well,” she recalls. “He looked at me like I had no idea what I was talking about.” The would-be angler then asked the same question of the nearest male AMC staffer, who echoed Yakubowski’s advice.

Sometimes she finds that skepticism frustrating, but mostly she laughs it off. After a few hours in the woods with Yakubowski, who has an infectious laugh and a penchant for wearing a flower tucked behind her ear at all times, even the most dubious participant tends to warm up. “Once they see you know what you’re doing, they start to respect you more,” she says.

Mitra Karimian has been guiding with AMC for six years. During that time, she’s learned a lot about how to handle different demographics. She has learned that many veterans appreciate a firm hand on the wheel, while younger hikers can be more prone to question her decisions and challenge her authority. “As someone who is short, I sometimes have to work hard to be seen as capable,” she says. This tends to be less of an issue on women’s hikes, like the one I dropped in on, but women do question her skills. Karimian stresses that groups of one gender aren’t necessarily easier or harder to lead. They’re just different.

Similarly, female guides don’t “have it worse” than male counterparts, but they do face different issues. Karimian recalls being apprehensive about guiding an overnight trip with only one participant, a man. “He was a nice guy, but I didn’t feel comfortable being alone in a tent with a stranger,” she says. The issue was resolved when Karimian mentioned it to her coordinator, and another guide joined the trip.

Karimian also mentions that guiding can be “incredibly hard on the body.” She points out: “You don’t see a lot of older guides who have been doing it for decades.” While female and male guides carry similar pack weights, female guides often carry a larger percentage of their body weight. Over time, this takes a toll on hips and joints. “I love guiding, but I can’t do it forever,” Karimian says.

While the gender gap among professional guides hasn’t reached perfect parity yet, the hope is that it might, if we lay the groundwork. According to Ward, the biggest hurdle for most women is gaining confidence. “Men get respect and confidence because they are men,” she says. “Women have to work a little harder.”

With an increasing number of women participating in traditionally male-dominated activities, the pace of change may speed up. “AMC does have a lot of young people and a lot of female guides working for us,” Yakubowksi says. She’s encouraged to see more women taking up fly fishing. “Women are getting into it. They’re fishing, and they’re starting to teach, too,” she says.

“We can do both really well.”