Find Love Outdoors With AMC—Like These Three Couples Did 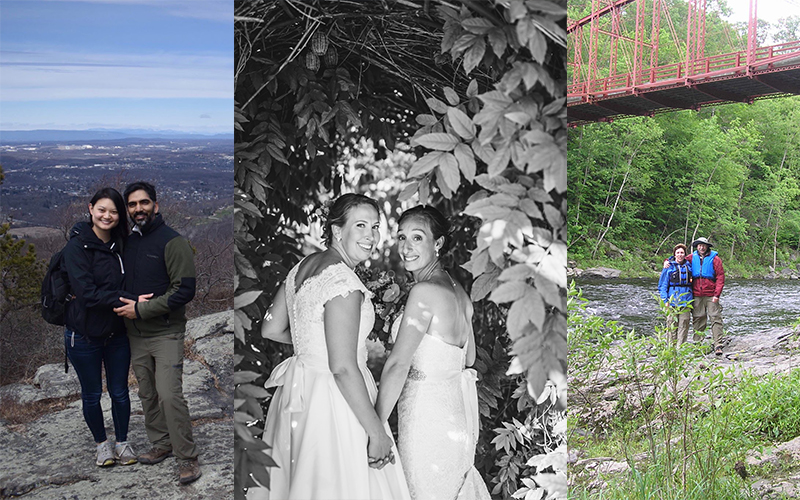 Elisa and Venkat, Kate and Kate, and Pat and Stuart are all AMC couples lucky enough to find love outdoors.

When Mike Carmon decided to propose to his girlfriend, Jesse Jameson, he picked one of the most remote peaks in New Hampshire for the setting: West Bond, in the Pemigewasset Wilderness.

For these two veterans of the White Mountains (Carmon was then the operations director for the Mount Washington Observatory, and Jameson is the group sales manager for the Appalachian Mountain Club), the location was a no-brainer. The two hiked the 9-mile route during peak foliage season, set up camp, and scrambled out into the open in time for sunset. Carmon got down on one knee while their dog, Skookumchuck, watched the proceedings.

“The three of us took in our absolutely favorite view in the White Mountains,” he says. “We were on top of the world!”

Jameson said yes, by the way.

More and more couples are choosing White Mountain peaks for proposals and weddings—and many of these lovebirds first met through the Appalachian Mountain Club. In Carmon and Jameson’s case, he remarked on her AMC sweatshirt the day they met.

“We bonded right there, over our love of the White Mountains,” he recalls.

We tracked down three other couples whose relationships were kindled by their love of the outdoors, with a little help from AMC as cupid. Who knows? Their derring-I-dos just might spark your own spring fever.

The first time Kate Estabrook, 33, and Kate Youmans, 37, met, it was the end of a long day. They were both exhausted, and they immediately began to tease each other.

It was the winter of 2013. Estabrook was working as a caretaker at AMC’s Cardigan Lodge in Alexandria, N.H., when a group of AMC hikers from Boston—who called themselves The Cool Kids—arrived at the door. Youmans was one of those Kids.

“She showed up late, as always, and she’s got three Trader Joe’s bags full of food, coming up that narrow staircase,” Estabrook recalls. “I said, ‘Looks like you guys are gonna starve this weekend,’ totally sassing her right from the beginning.”

But early the next morning, Youmans had the last laugh. When a fire alarm sounded, the two found themselves face to face at 5 a.m. after running out of their rooms. “I took one look at her and pointed out that her nametag was upside down,” Youmans says.

Four years later, The Cool Kids plus Estabrook reunited at Cardigan for a weekend celebrating the Kates’ nuptials. One of the Kids officiated. Another was in the wedding party. The rest filled a canoe full of beer for all of the events the Kates had planned and dragged it to the lodge.

“Cardigan had always been a second home for me,” says Estabrook, a self-proclaimed New England wanderer who never was much for settling down—until she met Youmans. “But AMC and Cardigan not only ended up being the place where we met but also creating this safe environment for us to talk and really get to know each other.”

These days the two live in Salt Lake City. Youmans is the STEM (science, technology, engineering, and math) director at a charter school, while Estabrook teaches environmental science and art at a specialized school for boys. Although they’re far from where they first met, the lessons they learned through AMC continue to play a big role in their lives. Cardigan, they say, was where they learned to be true to themselves.

The summer after their fateful meeting, both Kates were hired by AMC to run an outdoor program at Cardigan. They start to giggle when recalling that summer.

“I don’t know if we broke any rules,” Youmans says. “But I don’t think AMC knew we were in a relationship when they set us up together like that.” It turned into the best-case scenario for the Kates and for AMC. “When you have two people that are really happy and giddy and goofy, that’s going to go pretty well,” Youmans says.

The teasing has become a signature part of their relationship. Youmans calls Esterbrook her “bad-ass” wife, someone who beats her in nearly every outdoors activity they try.

“Except swimming!” Youmans points out.

And what about that memorable summer? “We still have our nametags,” Youmans whispers. And both Kates burst out laughing.

Pat and Stuart Paddle into the Sunset

Neither Pat nor Stuart Howe remembers every detail of the day they met. But between them, they fill the gaps in each others’ recollection, painting a complete picture.

Pat, 57, an administrator at Worcester Polytech Institute in Massachusetts, and Stuart, 65, a retired district chief with the Worcester Fire Department, had both signed up for a 2006 Worcester Chapter paddle trip led by David Miller. “I shook [Stuart’s] hand that morning, but I don’t remember meeting him,” Pat recalls. Later, when the group beached for a lunch break, “Stuart pulled a folding chair out of his kayak and set it up, and I thought that was pretty cool!”

For his part, Stuart doesn’t remember the chair, but he does recall being out on the river and eavesdropping on a conversation Pat was having with another kayaker. “I remember her saying it was her daughter’s birthday, so I asked if she was doing anything special for it,” Stuart says. “She said she does something special for her daughters every day, and I thought that was neat.”

Soon, the two had bonded over family—they each have two daughters—as well as their love of the river and their connection to AMC.

They had one more thing in common. They were both friends with Miller, a longtime AMC trip leader who also happens to be an ordained minister with the Unitarian Universalist Church. As Pat and Stuart grew closer, it became something of a forgone conclusion that Miller would officiate Stuart and Pat’s wedding.

“People who paddle, hike, and camp together have lots of time to get to know each other,” Miller says. “We have the chance to talk about our lives at length, depend on each other, and learn from each other.”

Stuart proposed on Christmas morning 2011 by giving Pat a ring of baby carrots connected with toothpicks. She had said she’d only marry him if he presented her with a 10-karat ring.

The following year, Miller married the couple at another paddle outing in Northfield, Mass., along the Connecticut River. They chartered a river boat for their guests, many of whom pitched tents alongside Pat and Stuart later that night at Barton Cove Campground. Of outdoor weddings, Pat says: “It just seems right and fitting. I think the impulse comes not from the mind, but from the heart.”

The Howes remain engaged members of AMC, as well as the Green Mountain Club, and are planning an upcoming thru-hike of Vermont’s Long Trail. “The best part about AMC and about Stuart is staying active,” Pat says. “It’s easy to just sit back in the recliner all day, but we motivate each other to do things. I’ve never regretted getting up and doing something with him.”

Elisa and Venkat plow toward passion

Getting ditched at the top of a ski lift might not sound like the start of a beautiful relationship, but that’s what happened to Venkat Rao on the day he met his partner-to-be, Elisa Dun.

In 2018, Rao, 31, and Dun, 32, were both signed up for an AMC Young Members ski trip with the New York–North Jersey Chapter. After finding themselves on the same lift seat for their first run at Cascade Cross-Country Ski Center in Lake Placid, N.Y., Rao was looking forward to skiing down together, too. Dun, however, was eager to hit the slope and didn’t realize that snowboarders, like Rao, need to secure their gear before taking off.

“We get to the top, and I bend down to strap on my board, and when I look up, there’s nobody there,” Rao recalls. “And I thought, I guess girls from Manhattan don’t want to talk to guys from Queens!”

Their second AMC ski trip a couple of months later went much better. On the long drive to Killington, Vt., Rao, who lives in Astoria, and Dun, an Upper East Sider, had more time to get to know each other, and the rest is history.

Both are a long way from home—Dun is from Northern California, while Rao hails from Mumbai, India—but they say AMC helps them feel like they’re part of a community. “Well, you know, I didn’t join AMC because I thought it would be the Appalachian Marriage Club,” Dun jokes. “But before joining, I was so far from home and felt restless. Meeting Venkat and being involved with the group has made me feel calmer, knowing I can hang out with such good people.”

“The AMC tends to attract adventurous folks with an inclination to exploration,” Rao says. “We like to try new things. That may be a national park, but it might be a new restaurant or art gallery as well.” Dun, a lawyer, recently took her first surfing lessons at Rockaway Beach, while Rao, an IT specialist, joined the local AMC Climbing Committee to help co-lead trips to the Shawangunk Mountains.

“Knowing AMC people and having AMC events as options helped us engage in our outdoor passions,” Dun said. “It’s easier when you live in a big city to have that kind of access, because you can all just rent a car together or pitch in for a cabin or lodge.”

Does the couple have any advice for other city folk looking to get closer to nature?

“Sure, it’s easy,” Dun says. “Go to AMC and sign up for an event. You never know who you will meet!”

LEARN MORE: WHAT TO KNOW ABOUT WHITE MOUNTAIN WEDDINGS

In the White Mountains of New Hampshire, every justice of the peace has a favorite story. For Conway JP Christie Girouard, hers is a cold and windy day in February, waiting at the top of Mount Willard for an ice-climbing couple to scale the cliff so she could officiate their nuptials. As for weddings on Mount Washington, New England’s highest peak, Girouard has lost track of how many she has conducted.

“Those who choose a mountain setting have some kind of connection to the mountains,” she says. “It’s personal and intimate. They want it to be theirs.”

Patrick Hummel, the manager of Mount Washington State Park, estimates that 10 to 12 weddings per season occur atop the mountain, primarily on the observation deck. In general, New Hampshire State Parks suggests couples obtain a $100 permit for any “nontraditional” activity they want to hold in a park. Renting a state pavilion or other guest services could increase that cost.

Elsewhere in the White Mountain National Forest, the U.S. Forest Service earmarks two locations, in particular, for large events: the Russell-Colbath Barn near the Kancamagus Highway and the Dolly Copp Picnic Pavilion beside the Peabody River, near Gorham, N.H. Reservations and permits apply. For most mountaintop weddings, though, couples tend to go it alone: no band, no attendants, no bells or whistles.

“We can’t really host guests or have catering up there,” Hummel says. “But most couples understand that having a wedding atop Mount Washington is not a typical wedding.”

Mike Cherim, a justice of the peace and the owner of Redline Guiding, in Intervale, N.H., knows something about atypical weddings. He was married on Mount Kearsarge North and has conducted backcountry weddings in Huntington Ravine, atop Mount Washington, and at the top of Elephant Head in Crawford Notch, where he says there was a special energy in the air.

What about the White Mountains’ notoriously unpredictable weather? “Sure, you roll the dice, but I tell anyone doing this that they shouldn’t worry about rain,” Cherim says. “If their knot gets wet, that just means it will never get untied!”  –D.S.