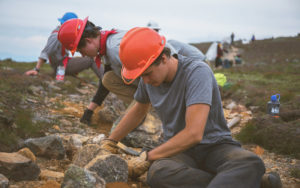 Editor’s Note: On January 25, 2019, after this story had been written, President Trump and Congressional leaders agreed to a stop-gap bill that would temporarily end the partial government shutdown, funding and reopening the government for three weeks, through Feb. 15. President Trump has stated publicly that he will veto any Congressional bill that does not include funding for a wall on the southern border of the United States. If his office and the legislature cannot agree on an appropriations bill by February 15, another government shutdown is possible.

Winter storms frequently bring high winds, deep snow, and limb-snapping ice to the Northeast, all of which can leave a mess on hiking trails. The days and weeks following such a storm would typically be go-time for volunteer trail maintainers in AMC’s region, but not this winter. Volunteers seeking to assess trails or lands managed by the U.S. Forest Service, the U.S. Fish and Wildlife Service, or the National Park Service—including the Appalachian Trail, or AT—are forced to stay home amid a partial government shutdown that has shuttered all nonessential government operations.

As President Donald Trump and Congressional leaders remain locked in a budgetary stalemate that has left the federal government unfunded since December 22, 2018, thousands of citizens have been impacted—most notably the 800,000 federal employees who are missing paychecks. But the shutdown has far-reaching impacts that trickle down to the government’s nonprofit and private sector partners. AMC and its volunteers frequently work in lock-step with federal agencies, including the National Park Service and the U.S. Forest Service, tending to hundreds of miles of trails in the Northeast.

With the lights off at both of those agencies, AMC’s trail operations have faced a number of challenges and questions: confusion regarding what work (if any) AMC’s volunteer trail adopters can do; a halt in communication between AMC’s trails department and federal land managers; and the possibility that AMC trail projects could be delayed or go unfunded, should the shutdown continue.

One of the easiest places to see this impact is on federally designated trails, such as the AT. AMC tends to more than 300 miles of the AT, the most of any of the 31 clubs that maintain the illustrious trail. Volunteers, working with local trail clubs including AMC, sign Volunteer Service Agreements with the National Park Service and the U.S. Forest Service that treat them like federal employees while they are working on the trail. This way, the federal government insures trail volunteers for injuries sustained during their work and even provides coverage should they be named in a lawsuit. With the government shut down, the insurance program is suspended, leaving the 2,192-mile AT open to hikers but closed to volunteers.

“During the shutdown, by law, all of our Appalachian Trail Conservancy (ATC) Trail crews, seasonal staff, and A.T. volunteers must cease all work on the Appalachian National Scenic Trail and its side trails,” wrote Carin Farley, acting chief ranger of the Appalachian National Scenic Trail, in an e-mail dated January 8 to a select number of trail club leaders. “Volunteer Service Agreements (VSAs) are suspended and any work done would jeopardize the A.T. volunteer program.”

In many cases, confusion reigns. For starters, Andrew Norkin, director of AMC’s trails department, says he never received Farley’s e-mail. AMC’s White Mountain huts on the AT that are open for self-service in winter—Carter Notch and Zealand Falls—remain open because no one from the National Park Service has said they should be closed, Norkin explains. (Lonesome Lake Hut, which is on land owned by the state of New Hampshire, is also open.)

What’s more, because the AT is located on a corridor of federal public land that runs through other properties, AMC volunteers are unsure whether they’re allowed to perform work on sections of the AT that traverse state or municipal land, such as the Department of Conservation and Recreation (DCR) in Massachusetts. The DCR’s volunteer service agreement provides some liability protection to volunteers and organizations performing approved work on their lands, but volunteer leaders have not received direction on whether such work is allowed, let alone insured, if done on the AT. And what about volunteer maintenance of the Bay Circuit Trail, which passes through lands managed by the U.S. Fish and Wildlife Service?

“As of today, we have not definitively heard about the details of this federal/state detail, so for now, we are telling our volunteers not to perform their duties, but they are permitted to recreational-visit the trail, like any other member of the public,” says Cosmo Catalano, a volunteer coordinator with the Massachusetts Appalachian Trail Management Committee and AMC’s Berkshire Chapter.

The shutdown has halted volunteer work elsewhere in AMC’s region, as well. In the Delaware Valley, Valley Forge National Historic Park, which includes Hopeswell Furnace National Historical Site, sent AMC volunteers a memorandum informing them that volunteers must re-register with one of two park partners, the Encampment Store or the Valley Forge Park Alliance, in order to do any volunteer work. In Connecticut, where AMC volunteers maintain the state’s entire length of the AT, volunteer trail maintainers have had to ignore reports of blown down trees, illegal fire rings, and even an abandoned bicycle on the trail.

“We have shared all directives from [the National Park Service] with our club’s volunteer workers,” says Dave Boone, the chair of AMC’s Connecticut Chapter AT Committee. “Most find the prohibition upsetting and unnecessary, but to my knowledge, the prohibition is being complied with.”

Aaron Gorban, AMC’s director of outdoor leadership training and risk management, says that while AMC respects and values the commitment its volunteer communities have to the public lands and trails, “We do, as an organization, need to honor those requests, and if there have been directives from the federal partners, we do not do that work.”

While the bulk of trail work is carried out from spring through fall, AMC uses the winter to plan projects for the upcoming field season. In terms of lasting consequences from the shutdown, AMC professional trails staffers say they’re most concerned about delays to crucial projects they want to complete this year, such as building a trail network in the Katahdin Woods and Waters National Monument and making needed improvements to the Crawford Path.

While AMC holds ongoing agreements with its federal partners to conduct routine trail maintenance, bigger projects—like a bridge reconstruction or the installation of a rock staircase, for instance—require additional approvals. The National Park Service, for instance, holds two so-called Small Projects Days per year to assess proposals and ensure those projects comply with ecological protections under the National Environmental Policy Act.

Complicating matters, as part of AMC’s agreement to operate Mohican Outdoor Center in the Delaware Water Gap National Recreation Area, the National Park Service requires 1,000 hours of staff- and volunteer-implemented trail projects annually. In a typical year, AMC’s proposed projects would be discussed verbally with Park Service staff in January, officially submitted in February, and approved by March. That timeline is in jeopardy this year, as AMC staffers have had virtually no contact with Park or Forest Service staff since mid-December.

“If it’s the middle of March and this hasn’t been sorted out, we’re really running out of time to implement any kind of plan,” says Alex DeLucia, AMC’s volunteer trails program manager.

“We rely on Forest Service and NPS to do maintenance, and it takes a lot of time to get a task agreement to do those projects,” Norkin says, adding that projects could be “bumped to next year” if the federal government does not reopen soon.

What’s more, DeLucia says a shutdown that extends into the fall, or a second shutdown later this year, could impact federal funding for AMC’s trail work, either in securing grants for future years’ projects or reimbursing completed work.

Until an agreement is reached, trail staff and volunteers are focusing on the many projects in AMC’s docket on land not managed by the federal government. For everything else, they wait.