Green New Deal: What It Is, Who’s Behind It, and What It Means for Conservation 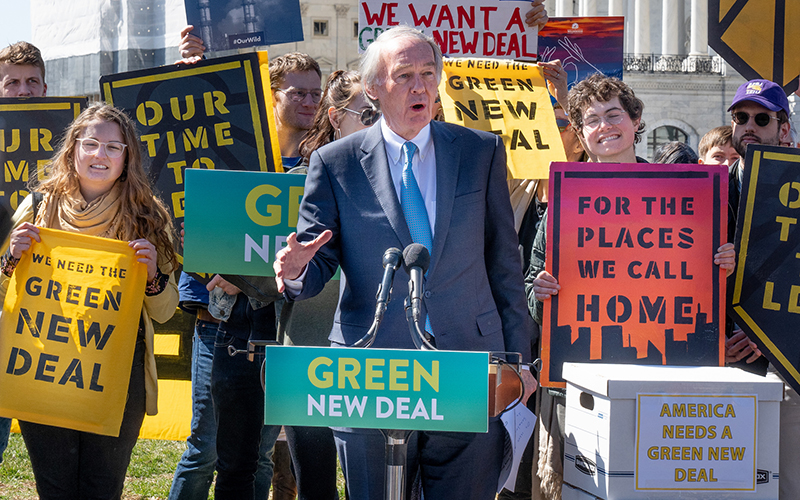 Victoria Pickering via Flickr CommonsSen. Ed Markey, a Green New Deal co-sponsor, speaks at a rally before a procedural vote on March 26.

“Green New Deal”: It’s already one of most-used political phrases of 2019—and arguably one of the most divisive. For some Americans, the proposed Congressional resolution embodies government overreach in its most egregious form. For others, the Green New Deal represents the decisive action needed to save humanity from climate extinction. Still others, including Speaker of the House Nancy Pelosi, aren’t so sure.

And for plenty of people across the country, the phrase elicits furious head-scratching.

Google searches for “green new deal,” “green new deal details,” and “what is the green new deal” shot up in the hours after Rep. Alexandria Ocasio-Cortez (D-N.Y.) and Sen. Ed Markey (D-Mass.) formally announced the resolution on February 7, 2019. Almost as quickly, the rumors—both correct and not so much—of what’s actually in the resolution spread: the phasing-out of all air travel, the retrofitting of every building in America, even the elimination of “farting cows.” (For the record, two out of those three are real. More below.)

To help parse these conflicting narratives, and to begin to understand what a Green New Deal might mean for AMC’s region, we took a crack at researching and answering our own basic questions about the proposal.

Where did the Green New Deal come from?

The Green New Deal was not born on February 7, 2019. The concept is believed to have originated with the journalist Thomas Friedman in a series of New York Times columns in January 2007. Back then, Friedman called for a broad, society-level transition from fossil fuels to renewable energy, a “huge industrial project” that could “spur our economy into the 21st century.”

The term, of course, harkens to Franklin D. Roosevelt’s famed New Deal, a Depression-era series of social programs and infrastructure projects that created jobs and helped stabilize the economy. One of those FDR programs was the Civilian Conservation Corps, which employed millions of young men in environmental projects, from planting trees to constructing trail shelters, and continues to shape outdoor infrastructure and strategy, including that of AMC, today.

In the years after Friedman coined “Green New Deal,” environmental action groups picked up the mantle, and the Green Party candidate and Massachusetts native Jill Stein made its adoption a central platform of her presidential runs in 2012 and 2016.

OK, but what about the Green New Deal in its current form?

The Green New Deal is not a single piece of legislation but what’s known as a simple resolution to embark on an “historical, generational commitment to end climate change,” as Sen. Markey remarked at the unveiling. Markey says the resolution puts forth a “set of principles, not prescriptions” to meet 10-year goals in five key areas: the functional elimination of greenhouse gas emissions; the creation of millions of “good, high-wage jobs”; an investment in sustainable infrastructure and industry; the assurance of clean air and water, climate and community resiliency, healthy food, access to nature, and a sustainable environment for all Americans “for generations to come”; and justice for communities of color, indigenous people, the unhoused, disabled, and other “frontline and vulnerable communities.”

The difference between a simple resolution and a bill is that the former does not require the approval of two houses of Congress or a president’s signature, and it does not carry the force of a law. In other words, think of the Green New Deal not as one piece of legislation but rather as a statement of commitment to pass hundreds of potential bills that, collectively, would work to establish what its proponents call a more sustainable and equitable society.

Why should the Green New Deal matter to folks in the Northeast and Mid-Atlantic?

Supporters say we should care because AMC’s region is seeing immediate and projected impacts of climate change that will transform nearly every aspect of our lives, from the food we eat, to the mountains and waters we enjoy, to the air we breathe. As soon as 25 years from now, several islands in the Chesapeake Bay may be underwater, as sea levels continue to rise. And already, more frequent and powerful storms are hitting the region, threatening coastal areas with dangerous tidal surges and damaging recreational trails used by thousands. A warming climate is affecting alpine plants, regional birds and wildlife, and marine ecosystems, according to Georgia Murray, an AMC staff scientist.

“It’s a vision for a comprehensive approach to addressing what is the existential crisis of climate change,” says Susan Arnold, AMC’s vice president for conservation. “What I think it should mean to us is to shake us out of any complacency we may still have about this problem and say we need paradigm shift, we need to think differently about how we’re going to tackle this problem—and go after it in a much more holistic way.”

What does the Green New Deal have to say about conservation or recreation?

Being a resolution and not a bill, the Green New Deal is short on specifics regarding how the United States will achieve these extremely ambitious—some would say impossible—environmental targets in a decade. Broadly speaking, the goals include guaranteeing universal access to clean water; transitioning to clean sources of energy; reducing pollution and greenhouse gas emissions; and restoring and protecting fragile ecosystems and public lands, waters, and oceans. Besides the vast aim of protecting “access to nature” for all Americans, the Green New Deal does not specifically address goals around outdoor recreation.

How would it change my life?

If every goal listed in the Green New Deal were to be implemented, we would experience a massive restructuring of society not seen in America since—well, ever. The resolution calls for the retrofitting of every building in America to meet green standards. It calls for the eventual phasing out of air travel, replaced by a nationwide network of electric high-speed trains designed to be as time efficient and more energy efficient than planes (although, as observers have noted, even trains have a carbon footprint—albeit a smaller one). Where our food comes from would change, with a sustainable system replacing industrial agricultural that degrades soil and water.

While those changes would occur over the course of many years, they would collectively result in a radical shift from the way most Americans are currently living—a shift climate experts say may be necessary if we are to slow the devastating ecological impacts we’re already seeing. Other climate experts, however, say remaking the country’s infrastructure and energy sector by 2030 is a pipe dream.

“As a technologist studying this problem for 50 years, I don’t think we can do it,” John Holdren, the former science adviser to President Barack Obama, told The New York Times. “There’s hope we could do it by 2045 or 2050 if we get going now.”

Critics have also pointed out that economic forces may be working against many of the proposals in the Green New Deal framework. Several national labor unions, including the AFL-CIO, have come out strongly against the Green New Deal, saying it’s “unachievable” and could “cause harm to millions” of union members. Others point out that local policy changes are likely to make more of a dent in carbon emissions than sweeping national initiatives.

“Smaller local initiatives, such as reforming land-use regulations to encourage more density, the elimination of parking requirements and free parking, and congestion taxes, would reduce driving and carbon emissions and can be tailored to individual communities in a way that grandiose national plans can’t,” wrote Adam Millsap for Forbes.

Does AMC support it?

From AMC’s long-standing support of environmentally balanced clean energy, to the protection and conservation of vulnerable lands and waters, the organization has been working on many of the issues laid out in the Green New Deal for years, Arnold says. She sets two priorities for responding to the proposal. First, she hopes to communicate the rationale behind the Green New Deal to AMC members in a way that hits home to them: protecting the lands where they love to recreate. “An important role we have is ratcheting down the political rhetoric about this with our constituency to get people to understand what it is and isn’t,” she says.

Second, she aims to follow the resolution’s impact, tracking how specific pieces of legislation might interface directly with AMC’s work. “I don’t see [the Green New Deal] as something that totally disrupts what we’re doing and how we do our work,” she says. “I see it as being a very high-level effort that, as you go lower down, touches on the work that we’ve been doing for many years: protecting the environment, clean air and water, access to the outdoors, stewardship.”

On March 26, Sen. Mitch McConnell (R-Ky.) brought the bill to the Senate floor for a procedural vote. Instead of participating in what they called a politically motivated “sham vote,” 43 Senate Democrats voted “present” instead of yea or nay. The bill was defeated, with zero votes in favor and 57 votes opposing. Democrats Joe Manchin (W. Va.), Doug Jones (Ala.), and Kyrsten Sinema (Ariz.), as well as Angus King (I-Maine), joined Republicans in voting against the Green New Deal. Despite their opposition to the Green New Deal, King and fellow Maine Sen. Susan Collins (R) have stated that action on climate change is crucial.

Some representatives are taking a different approach. With no Green New Deal vote scheduled for the House, a newly formed climate change work group is seeking to pursue narrower pieces of legislation. “The Green New Deal is aspirational. What we plan to do is offer tangible, achievable things—not just a resolution,” Rep. Elaina Luria (D-Va.), a leader of the New Democrat Coalition’s climate change task force, told reporters recently. “The entire plan of the task force is to find ways to attack [global temperature rise] incrementally.”

Young activists from the Sunrise Movement are taking their Green New Deal activism straight to the lawmakers who can put it in motion, waging a nationwide campaign of sit-ins at the offices of undecided members of Congress. In pushing for the adoption of the Green New Deal, these activists appear to represent the views of the majority of American voters. In December, the Yale Program on Climate Change Communication found that 81 percent of registered voters, including 91 percent of Democrats and 64 percent of Republicans, support the main tenets of the resolution as written. In a more recent poll in early March, amid heated debate, 59 percent of registered voters said they supported the tenets of the Green New Deal, while 28 percent opposed, according to a YouGov Blue poll taken on behalf of Data for Progress and 350 Action.

Where does this leave the American public? Despite all of the twists and turns so far, the story is just beginning. Broad support for the main themes of the Green New Deal mean these questions aren’t going away any time soon. Stay tuned for updates from AMC Outdoors on what happens next.