Green to Green: Take the T to Trail Running in Chestnut Hill 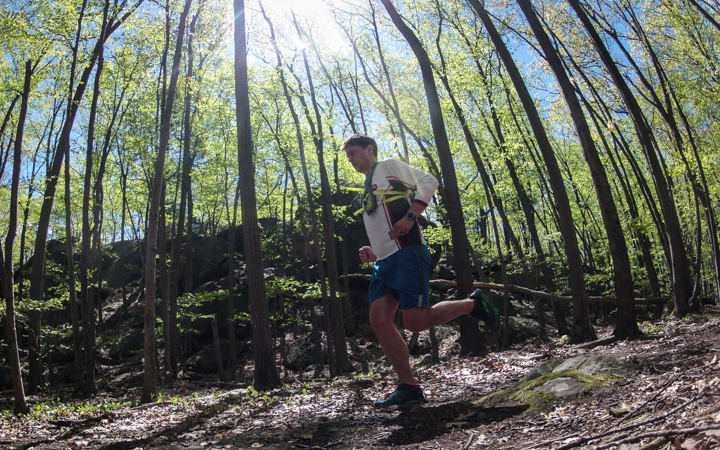 Marc ChalufourThe author makes his way along a a sunny stretch while trail running in Chestnut Hill.

A recent string of May showers relegated me to the Green Line instead of my usual bike commute—but all wasn’t lost. On one wet morning, as the train neared Chestnut Hill Station in Newton, Mass., I caught a glimpse of something surprising: trails! Lush, winding trails covered in a soft bed of orange needles and wood chips. I opened Google Maps on my phone to figure out what I was seeing, and there was Houghton Garden, wedged between Boston College and the Chestnut Hill Mall. Though small—just 10 acres with less than half a mile of trails—Houghton connects to Webster Conservation Area and Hammond Pond Reservation (a combined 114 acres) on the opposite side of the tracks, creating a varied network for a trail runner to explore for several miles.

Houghton Garden—a site on the National Register of Historic Places—features a well-groomed loop (the trail I’d seen from the train) circling a manicured forest. Climbing hydrangea, lily of the valley, and wood hyacinth bloom beneath an overstory of pine. A stream cuts through the center. The trail has a magical feel, like it could emerge in the The Shire around the next bend. Instead, it leads to the Green Line tracks (and a sanctioned crossing) across which lies the Webster Conservation Area.

I was disappointed how quickly the Houghton Garden stretch ended, but crossing the tracks brought me into an entirely different—and equally surprising—setting. Webster and Hammond Pond have a much wilder feel—like a miniature Blue Hills Reservation. Wider trails pass below the hills while rocky singletrack goes up and over. I circled this section amid a flurry of activity: A  New England Orienteering Club event had drawn a range of competitors who spanned generations and the full spectrum of racing attire, from blue jeans to microfiber.

The spectacle was amusing, but by the time I scampered across busy Hammond Pond Parkway, I was ready for the quieter setting of Webster’s western section. Hillier, more rugged, and more sprawling, this is where trail runners will likely find themselves most at home. Ironically, this is also the section abutting the ritzy Shops at Chestnut Hill mall, which makes it convenient both for pre-run parking and a post-run jaunt to Bloomingdales.

Boston has a lot of well-known trail running gems located within sight of downtown, from the Blue Hills in the south to the Middlesex Fells to the north—so it was with some surprise that I discovered this haven walking distance from a subway stop and all but hidden behind a mall. At some point I expect I’ll stop finding new trails to run around Boston—but I’m not at that point yet.