Monitoring the Bicknell’s Thrush in the Maine Woods 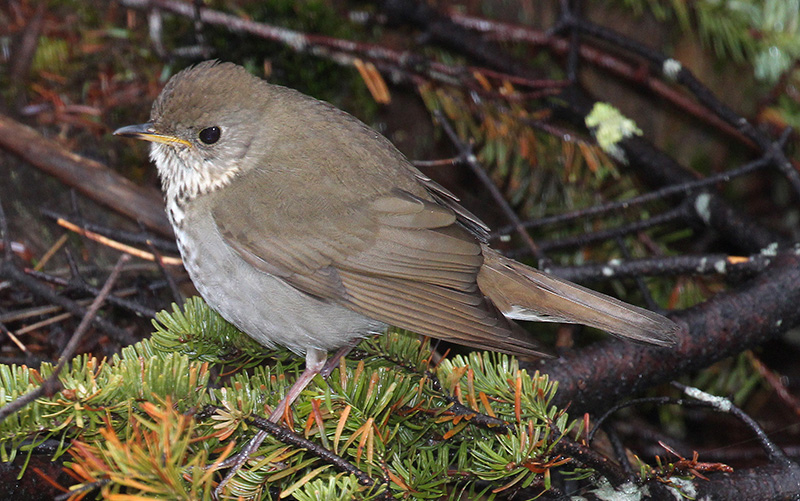 ALAN SCHMIERER/CREATIVE COMMONS BY FLICKRA recent spotting of a Bicknell’s thrush on Baker Mountain in Maine has opened the door for research at AMC.

Most birds start singing just before sunrise, and in June, that means 4 a.m.

Dave Cowan had already cleaned up his campsite and was close to the summit of Maine’s Baker Mountain when he heard a flute-like “shreee.”

“It was a Bicknell’s thrush,” Cowan, a longtime volunteer for the Vermont Center for Ecostudies Mountain Birdwatch program, which monitors sightings of mountain bird species and shares their data with scientists, recalls. “These birds have a great set of pipes.”

This elusive bird, with brown-gray features, a light gray underbelly, and hints of yellow on its mandible, tends to frequent elevations high in the mountains of the Northeast. For birders, catching a glimpse or hearing a call of a Bicknell’s thrush is a rare treat, especially as climate change continues to diminish acceptable habitats for these birds.

“It always feels good when you hear one on your survey. It feels like you’ve won,” says Cowan.

A positive identification of a Bicknell’s thrush on AMC’s Maine Woods Initiative property means a lot. For Cowan and his team at the Vermont Center for Ecostudies—a research organization that works with citizen scientists to advance the conservation of wildlife across the Americas—to spotting one helps track where these birds are breeding and how they continue to migrate north in search of acceptable homes. And for AMC, it proves the Maine Woods is just that refuge. 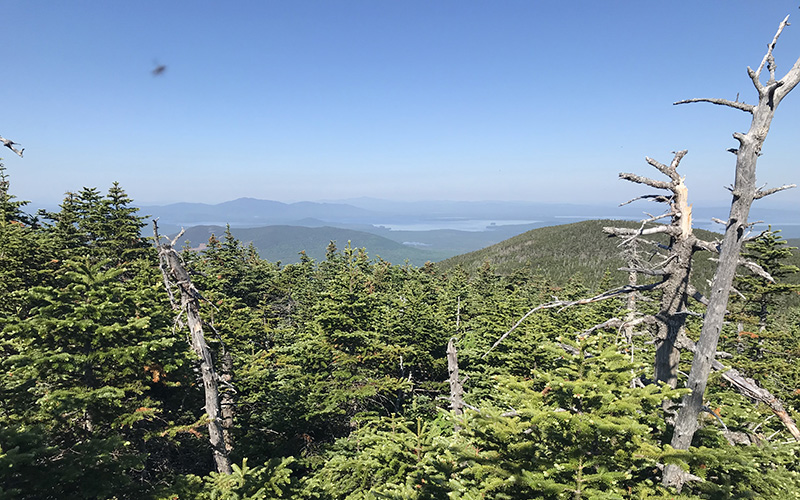 DAVE COWANA volunteer with the Vermont Center for Ecostudies spotted a Bicknell’s thrush just below the summit of Baker Mountain in Maine.

According to the Cornell Lab of Ornithology Bicknell’s thrush “sing a four-phrased, fluting song with a whirling quality,” and calls in harsher notes that sound like “veer” or “queep,” while the gray-cheeked thrush’s song sounds like a mesh of flute notes with a downslur.

What makes seeing the Bicknell’s thrush so exciting, though, is how infrequent it happens; with an estimated population of only 110,000 worldwide, the Bicknell’s thrush is one of the “rarest migratory songbirds in the Northeast,” according to Dave Publicover, AMC’s senior staff scientist.

Bicknell’s thrush typically live in higher elevations, usually above 3,000 feet, where balsam fir trees dominate the forest. They’re common in New York’s Adirondack Mountains, as well as in forests across the Northeast, but can also be spotted along parts of Canada’s cooler east coast at elevations as low as 1,500 feet. To complicate things more, these birds also prefer to make their homes in so-called disturbed forests, meaning they nest in the regenerating trees along hiking trails, ski slopes, or forests that have been blown down by winds or avalanches.

Unfortunately, warming temperatures in the Northeast due to climate change are causing the Bicknell’s thrush to move further north in search of habitat. While in the short term the U.S. Fish and Wildlife Service doesn’t acknowledge any threats to the Bicknell’s thrush that would qualify the species for the endangered list, data from the Vermont Center for Ecostudies’ Mountain Birdwatch program projects a grim future for the birds.

“When you live at the top of a mountain already, you can’t do much except move toward the (North and South) Poles. But here in the Northeast, once you get past Mount Washington you’re losing elevation. I’m not sure if the Bicknell’s thrush can outrun climate change in the long run,” explains Jason Hill, a quantitative ecologist with the center.

Since 2000, the Vermont Center for Ecostudies’ Mountain Birdwatch program has relied on volunteers like Cowan to collect data on bird species that typically live in mountain habitats. Hill, who manages the program, uses the data collected during the volunteer surveys to identify patterns where these birds live and migrate, then sharing his findings on public databases for scientists like the Knowledge Network for Biocomplexity.

“We have 130 long-term sampling routes across mountains of northeastern United States, including Vermont, New Hampshire, New York, and Maine,” Hill says. “Our volunteers sample the same physical location year after year, and that helps me to statistically predict how many of a certain bird species should be in that spot.”

With this snapshot of a species’ activities, scientists can then monitor their population growth, decline, and migration. In addition to the Bicknell’s thrush, the Mountain Birdwatch program monitors the boreal chickadee, winter wren, fox sparrow, blackpoll warbler, and others.

Volunteers conduct their surveys once a year in June, when birds in the Northeast are most likely to be present and active.

“June is when you are finding the birds most vocal on breeding territories,” Cowan explains. “Males are trying to attract females, building nests, and singing characteristic songs to announce their territory.”

AMC had never conducted its own formal birdwatch survey in the Maine Woods, but with a heavy mix of spruce and balsam trees scattered across its more than 70,000 acres there, Publicover expected it would be a natural habitat for the Bicknell’s thrush. To prove this, he enlisted the help of the Vermont Center for Ecostudies.

ALAN SCHMIERER/CREATIVE COMMONS BY FLICKRThe Bicknell’s thrush has a distinct flute like song, making it easy to tell them apart from other thrush species.

Cowan was up by 3:30 a.m. to start his survey in the Baker Mountain area of AMC’s Maine Woods Initiative. Following the guidelines of the Vermont Center for Ecostudies, he predetermined six stations along the 4.8-mile Baker Trail on the northwest corner of the conservation land. At each point, he would pause and sit silently for four periods of five minutes each, listening for calls. In between each five minutes, he would record what he’d heard.

“Birds aren’t singing every second,” Hill explains. “So, during those five-minute periods you may hear 30 percent of the birds that are actually in that area. Doing repeated counts helps my statistics.”

While Cowan was there specifically for the Bicknell’s thrush, he did hear other bird songs from a fox sparrow, winter wren, and Swainson’s thrush. It wasn’t until the second-to-last station, though, when he finally heard the call he was looking for.

“It was late into the survey, but still exciting to finally hear one,” Cowan says.

Because the Bicknell’s thrush prefers disturbed forests, Publicover says there isn’t much AMC can do in terms of habitat management, but instead rely on natural disturbances like wind. The sighting, however, opens doors for AMC to sponsor future surveys to learn more about the bird species in Maine and aid in research.

“It was something we were pretty sure was there, and now we have our confirmation,” says Publicover.