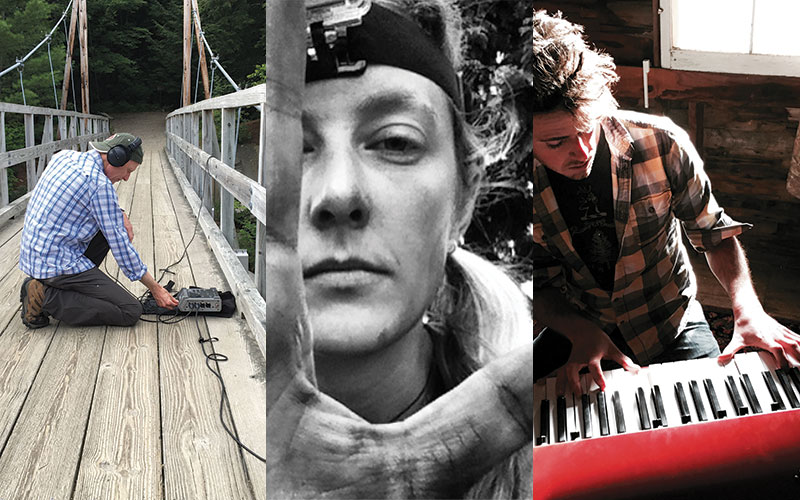 For centuries, artists have flocked to the White Mountains’ tranquil rivers, lofty summits, and craggy cliffs to create magnificent works of art. To continue the tradition, the U.S. Forest Service, in partnership with the Arts Alliance of Northern New Hampshire and Friends of Mead Base Conservation Center, has named White Mountain National Forest artists-in-residence every summer since 2011. AMC Outdoors asked past artists Kyle Browne (2013), Ben Cosgrove (2015), and Steve Wilkes (2017) to reflect on their residencies as they pass the paintbrush to the 2018 artists named just before our Summer 2018 issue went to press: multidisciplinary artist Lorri Deyer and sculptor and furniture maker Quinn Morrissette.

What did you work on during your residency?
Cosgrove: I wrote and conducted musical performances at a variety of venues throughout the White Mountains region, including in church basements, hotels, prisons, and schools.
Wilkes: I initiated the creation of an aural map of the 800,000 acres of White Mountain National Forest via in situ field recordings.
Browne: I captured the passage of time through graphite time-lapse drawings. I also used natural materials, such as birch bark rings, burnt wood, and stones, to create site-specific sculptures.

Did you learn anything unexpected?
Browne: The residency pushed me to think about materials that I found in nature, to learn how to work with the materials rather than against them, and to create forms and imagery that work with the landscape.
Cosgrove: To be honest, most of the things I learned in my residency were things I wasn’t expecting. I was especially delighted by the relative ease with which the history of a building or location could be unraveled, if I just tried looking into it for a day or so.

Which project are you proudest of?
Browne: “The Birch Bark Portals.” I camped in the Wild River for five days, collecting birch bark and crafting a mobile that I hung by the river in a place where flooding had occurred. It provided a space for contemplation and observation.
Cosgrove: “Wind Falling from a Higher Place.” It’s about the experience of becoming disoriented and reoriented by lousy weather along a high and exposed ridgeline.
Wilkes: A wide, spaced-pair stereo recording of “South Fork of Hancock Branch.”

Do you have any advice for the 2018 artists?
Browne: Take advantage of the forest, the volunteers, and the opportunity to just be in it for the time you are there. Let everything seep into you to inspire your art.
Cosgrove: Follow people around whenever they’ll let you; you’ll be amazed by what you pick up. I shadowed various Forest Service employees, sat in on meetings, followed trail crews, interviewed hikers, and met scientists. All of this imbued me with a nuanced understanding of the forest and a far deeper respect for those who care for it.
Wilkes: Be proactive and don’t limit yourself. Do whatever you have to do to get the job—your artwork—done! Also: Listen.