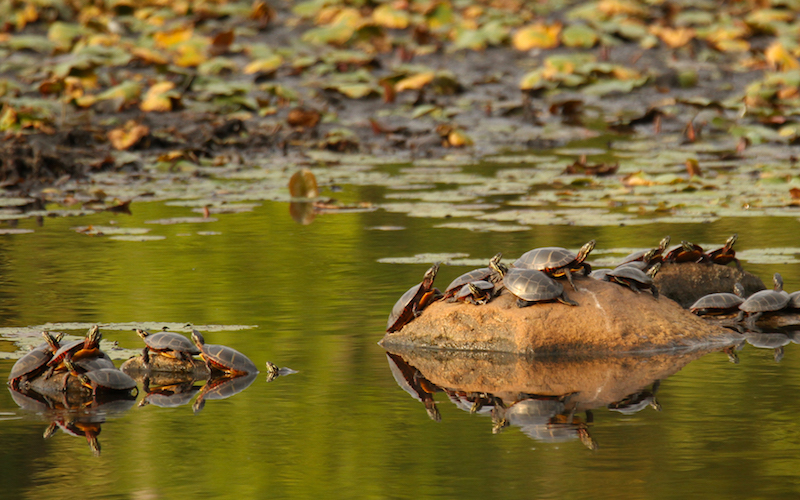 If you hike past a Northeastern pond this spring, you might spot one of nature’s great sunbathers: the painted turtle. This species is so fond of basking, its nickname is the “sun turtle.”

Painted turtles can spend up to six hours a day in the spring lying in the sun, often perched with other turtles on a log or a rock, surrounded by water. Spending time warming up allows these cold-blooded reptiles to better absorb vitamins from their food.

“They have an optimal temperature they’re trying to reach for metabolism,” explains Michael Jones, the former Massachusetts state herpetologist. Jones has been monitoring nesting female painted turtles in Andover, Mass., for about 20 years.

Painted turtles are the most abundant turtle species in North America, present from Canada to Mexico in the central and eastern parts of the continent. Despite facing natural predators and human threats, such as cars and development encroaching on their habitat, they remain plentiful throughout the Northeast.


Eastern painted turtles, which range in size from 4 to 7 inches long, have dark, smooth backs. Their skin is olive to black and is marked (or “painted”) with stripes of red, orange, or yellow on the face, neck, legs, and tail.

Painted turtles can thrive in various aquatic habitats, including reservoirs and ponds filled with algae. As omnivores, their diet includes invertebrates, plants, and scavenged fish and amphibians, Jones says. They start reproducing at a younger age and spend less of their time on land than other species of turtles, reducing the threat from dogs and cars. All of these characteristics help boost their numbers.


Painted turtles’ springtime sunbathing ends a period of several months during which they hibernate in the muddy bottoms of ponds or streams, where they have very little oxygen, light, or heat. The turtles come out as early as late February in our region, sometimes while ice still partially covers the water, Jones says.

By April, when the basking is in full swing, turtles crowd onto logs to get a taste of sun. On a typical spring day, a painted turtle’s agenda might look something like: lie in the sun, forage for food in the water until cold, emerge to lie in the sun some more. The cycle may repeat a few times each day.

The turtles will even stack on top of each other in several layers to get into the sun. While they may look motionless to the casual observer, if you watch them from a blind or by using a time-lapse camera, you’ll see they do circulate.

“If there’s only one log that only eight turtles can fit on, that’s all you’ll see, whether there are eight or 800” turtles in the pond, Jones says. If you look closely, though, you might spot other heads poking out of the water. According to Jones, a 50-acre pond could be home to as many as 500 painted turtles.


When a potential danger approaches, “Either they all drop off [into the water] or they freeze” in place, Jones says. Even the hard-shelled adults need to watch out for predators, such as crows, birds of prey, raccoons, and otters. “I don’t think they ever really relax,” Jones says. “The world they operate in is a hostile one. They’re never really at ease—whatever that means for a turtle.”