Save a Tree, Save a Neighborhood: Hattie Carthan, Brooklyn’s ‘Tree Lady’ 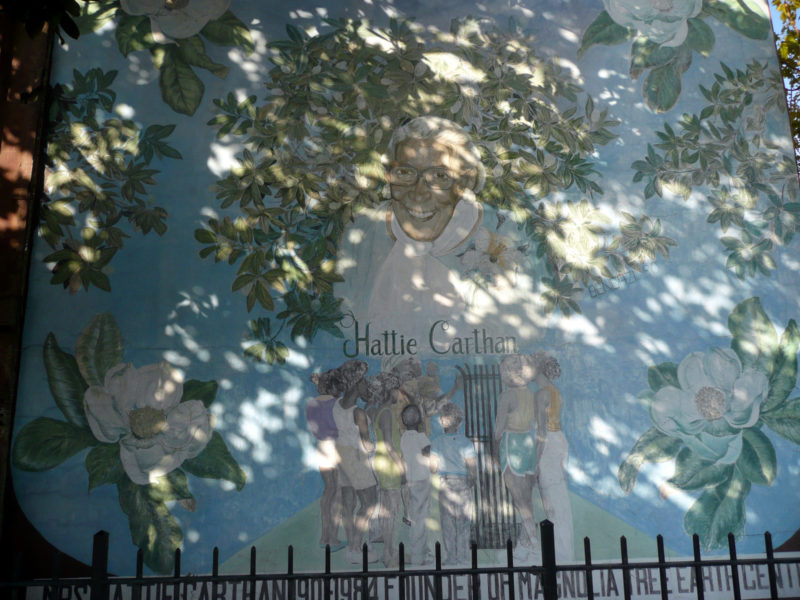 Watzek Library Digital Project/Flickr CommonsHattie Carthan is still fondly remembered in her community for not only her environmental activism but also her grit and perserverance.

In the mid-1960s, something new happened in the Bedford-Stuyvesant neighborhood of Brooklyn: trees began to grow. Through a remarkable feat of grassroots environmental activism, 1,500 trees were planted along once barren city sidewalks in less than a decade. Many hands worked to plant them but the vision of a greener community belonged to one woman. Her name was Hattie Carthan and she was one of the first African American community leaders to organize a movement to regreen a neighborhood.

Bedford-Stuyvesant, also known as Bed-Stuy, sits in the northern section of Brooklyn. Today, Bed-Stuy is known as a center for African American life and culture, its remarkable stretches of virtually untouched Victorian architecture, and for its up-and-coming real estate market. Nearly 60 years ago, when Carthan set out to revitalize the neighborhood’s green spaces, its economic outlook was very different.

Bedford-Stuyvesant was one of the country’s most heavily redlined communities. Redlining is a now illegal discriminatory practice that discouraged mortgage lenders from lending to communities deemed financially insecure, usually with high populations of people of color. It gets its name from the red ink that outlined these areas on government maps.

In the 1930s, African Americans began to migrate to Bed-Stuy from overcrowded Harlem, resulting in white flight and utter abandonment by investors. One appraiser who visited the neighborhood at the time noted in his report: “colored infiltration a definitely adverse influence on neighborhood desirability.”

Over the decades, the lack of investment made itself known through rampant poverty and environmental deterioration. Potholes went unfilled, broken streetlamps were left unfixed, and long-neglected trees died. Watching all of this from her ground floor apartment on Vernon Avenue was 64-year-old Carthan—and she wasn’t having it.

From Nature Lover to Activist

Hattie Carthan was born in Portsmouth, V.A., in 1900. When she was a child her family relocated to Long Island, N.Y. Her first trips into Brooklyn were with her minister father who preached there on the weekends. Even then she was enamored with nature, naming and “adopting” the trees she saw during the family’s drives into the city.

She began living in Brooklyn in 1928 and settled in Bedford-Stuyvesant on Vernon Avenue in 1953. When she arrived, it was still one of the prettier, tree-lined streets in the neighborhood, but by 1964 there were only four trees left. The community had grown increasingly disaffected from years of poverty, neglect, and frustration with racial injustice. That year the Harlem Race Riot of 1964, triggered by the fatal shooting of black teenager James Powell by a white police officer, spilled over from Harlem into Bed-Stuy. The riot lasted four days.

Carthan’s response to the turmoil in her neighborhood was simple: plant trees. She viewed it is a way to not only revitalize her community—but also to reclaim it. When asked later if she’d ever considered moving away as her community’s struggles worsened, she said, “We’ve already lost too many trees, houses and people… your community— you owe something to it. I didn’t care to run.” 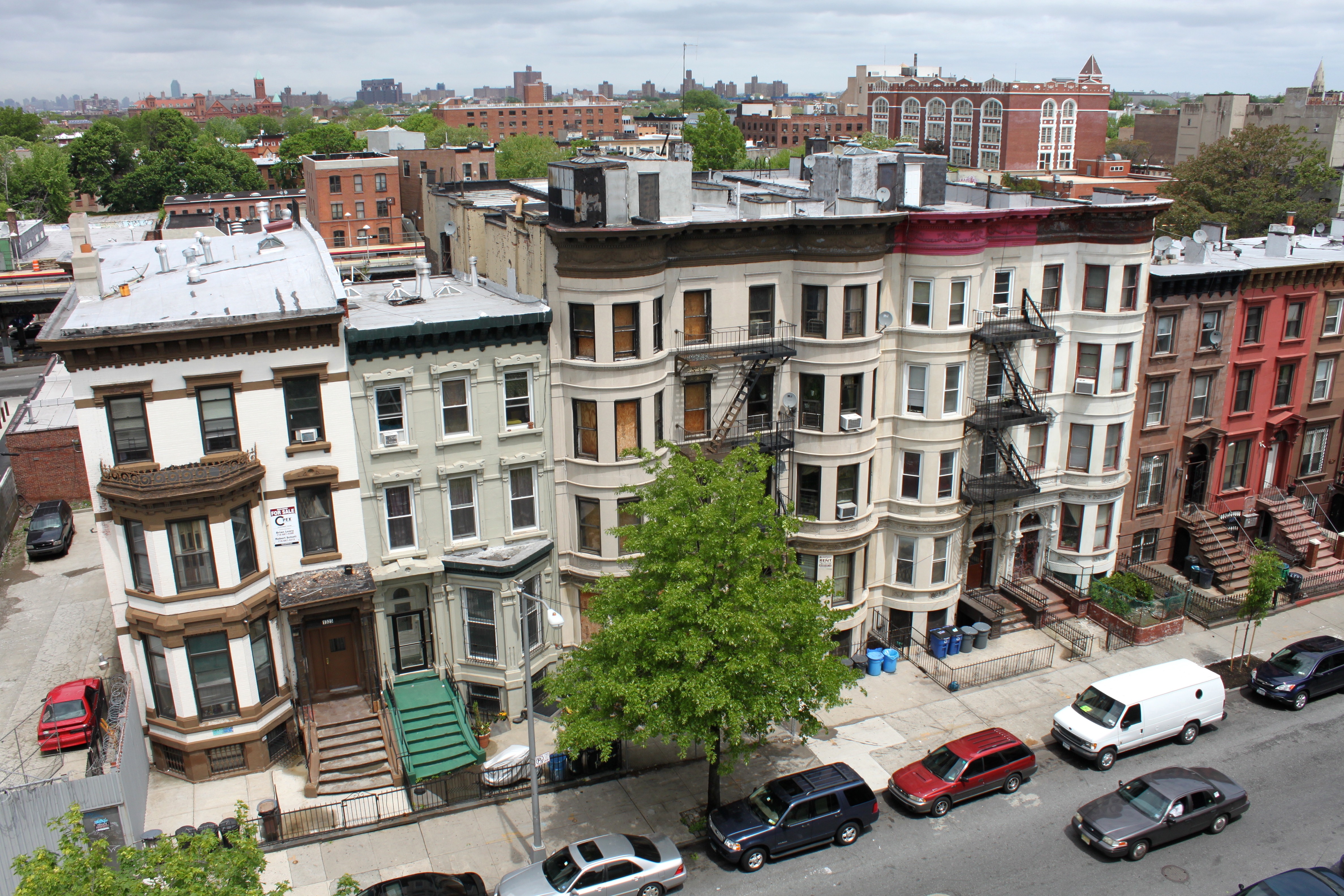 Eli Duke/Flickr CommonsMany of the trees in Bedford-Stuyvesant today were planted by initiatives started by Carthan.

Trees Begin to Grow in Brooklyn

Carthan’s first attempt to raise money to begin replanting the neighborhood’s trees was an utter failure. She later recollected, “There was no money there, no inclination, and I guess everybody felt I was too old.” Yet, she remained undaunted. Carthan rallied the neighbors on her block, which sat between Throop and Tompkins Avenues, to form the T&T–Vernon Block Association.

African American block associations had been a powerful force for social change in Bed-Stuy since at least the 1930s. Black residents who were early arrivals to the neighborhood formed block associations to resist white supremacist groups determined to keep them out and later, to combat the impacts of redlining in their community.

However, Carthan still faced resistance even among what she hoped would be a group of like-minded individuals; she was almost thrown out of the association when she suggested they plant trees. She continued working to make her case and in 1965, the group hosted its first fundraising event, a $1.25 a person barbeque that brought in just enough money to buy four trees. Carthan’s dream finally began to take off.

The next year, New York City Mayor John Lindsay attended the now annual fundraising barbeque. The event drew city-wide attention, and the Department of Parks and Recreation was impressed enough that it implemented a tree matching program; for every four trees a block association planted, it would receive six more.

By then, four block associations had formed the Bedford-Stuyvesant Beautification Committee with the expressed goal of planting trees, all under Carthan’s leadership. By 1970, that number grew to 100. Together, the block associations planted more than 1,500 trees in less than a decade: ginkos, sycamores, honey locusts, and others that would adapt well to Brooklyn’s urban climate. 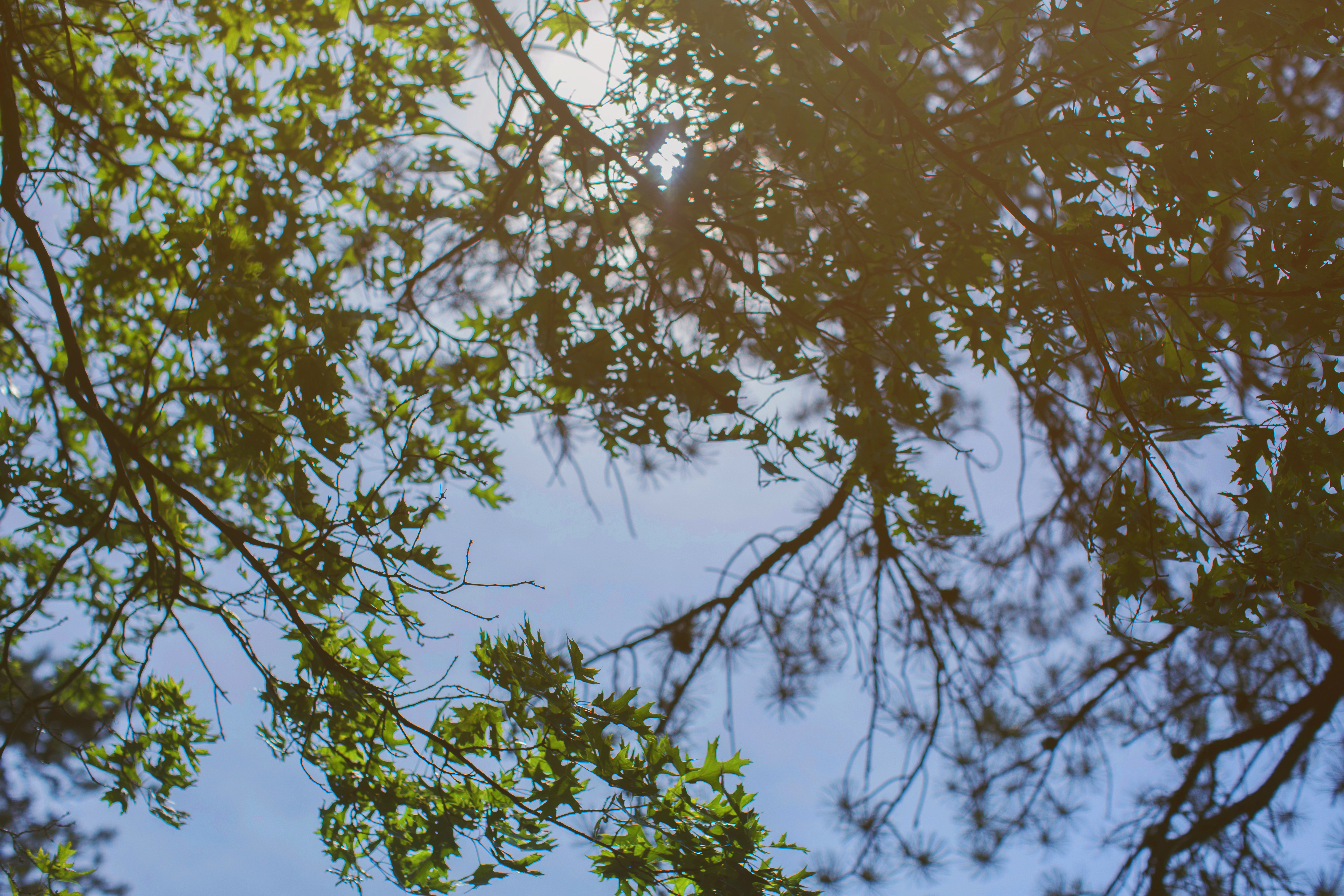 Paula ChampagneDecades of research have shown that the presence of trees has a powerful impact on human health.

The Value of Trees

When Carthan began her campaign to regreen Bed-Stuy the modern environmental movement was still in its infancy. Since the 1960’s, research has proven that trees improve air quality by capturing atmospheric carbon dioxide, dust and other pollutants. Their shade keeps neighborhoods measurably cooler in the summer, and they provide a buffer against cold winds during winter months. Even more remarkable, their roots improve water quality by filtering rainwater, and along with their leaves and branches, capture storm runoff that can lead to flooding.

These benefits, along with their aesthetic value, are why trees also increase property values. One study showed that potential homebuyers value properties with trees 11% more than their actual value, making greener neighborhoods more expensive to live in. The presence of trees also measurably increases community pride, bolsters public perceptions of an area and draws customers to local business. Communities with more trees also have lower rates of crime, and residents are less depressed and anxious.

Without the science to back up her argument, it took years for Carthan’s vision of a greener Brooklyn to be accepted in her own community and then to receive city support. She reported being called a “tree nut” by some but her extraordinary persistence and resilience saw her through.

Carthan recognized the potential of urban green spaces to not only lift the spirits of a community but also to address issues of poor nutrition and green spaces through gardening. To this day, the lack of green spaces in economically downtrodden communities—particularly communities of color—is often met with indifference. Instead, Carthan viewed creating respect and appreciation of nature as a necessity for revitalizing her community. 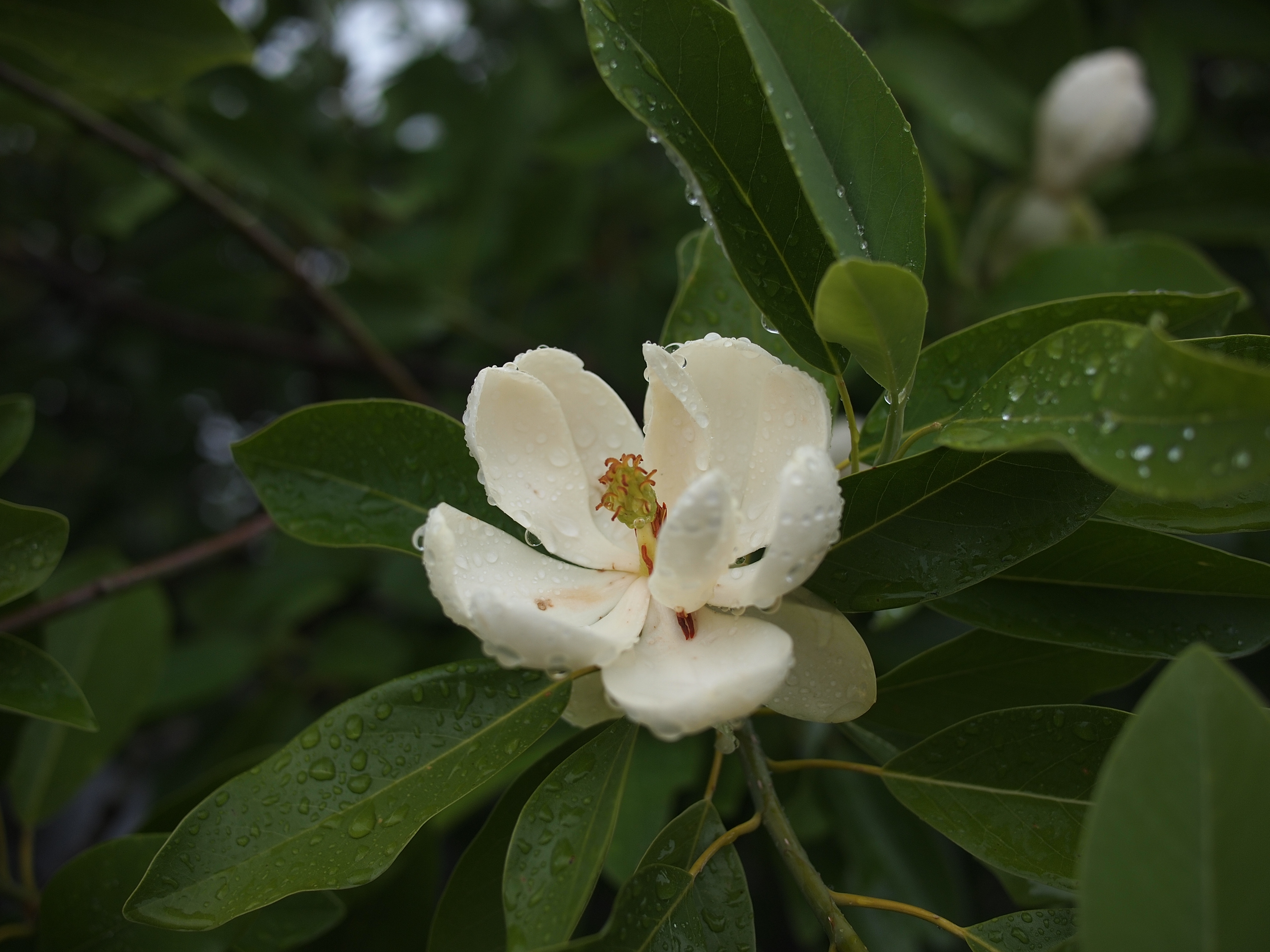 The brilliant white blooms of the magnolia tree are a common sight in the American south but are scarce further north. Carthan ensured that her community would be able to enjoy this rare sight for generations.

Carthan’s leadership role in regreening her community isn’t what she’s best known for. In fact, she’s most fondly remembered for saving one single tree.

In 1968, the city of New York was planning to tear down four abandoned brownstones and the tree they sheltered, but this wasn’t just any tree. It was a Magnolia grandiflora, a common species of tree in the American south but extraordinarily rare farther north. Planted in 1885, it had flourished in the harsh northeastern climate against all odds. Carthan took personal responsibility for every tree in her neighborhood and knew she had to act.

Already well known to city officials, she spent the next two years working with city and neighborhood agencies to come up with a plan to protect the tree. By 1970, she’d convinced the Landmarks Preservation Commission to designate the tree as a “living landmark,” meaning that it would be protected indefinitely.

She is cited in the tree’s designation report as “the person who, almost single-handedly, has been responsible for arousing local appreciation of the tree and in directing this appreciation towards practical steps for its preservation.” The city also sold her three of the brownstones for the unthinkable sum of $1,200. The buildings became the home of the Magnolia Tree and Earth Center, an “urban laboratory for the study of nature and the ways nature can improve neighborhoods.”

In the process of replanting trees, Carthan also founded two environmental groups. The first, the Bedford-Stuyvesant Neighborhood Tree Corps, launched in 1971 with the help of grant from the New York State Council on the Arts to teach the neighborhood’s young people about nature and how to care for all those newly planted trees.

The Green Guerillas, which Carthan founded in 1974, focused on revitalizing the community gardening movement. The organization provided gardening supplies and advice on how to start urban community green spaces, in addition to public actions like seeding the vacant lots that blighted the neighborhood.

In 1975, her impact in improving the quality of life in her neighborhood was formally recognized with an award for distinguished service to the city of New York. 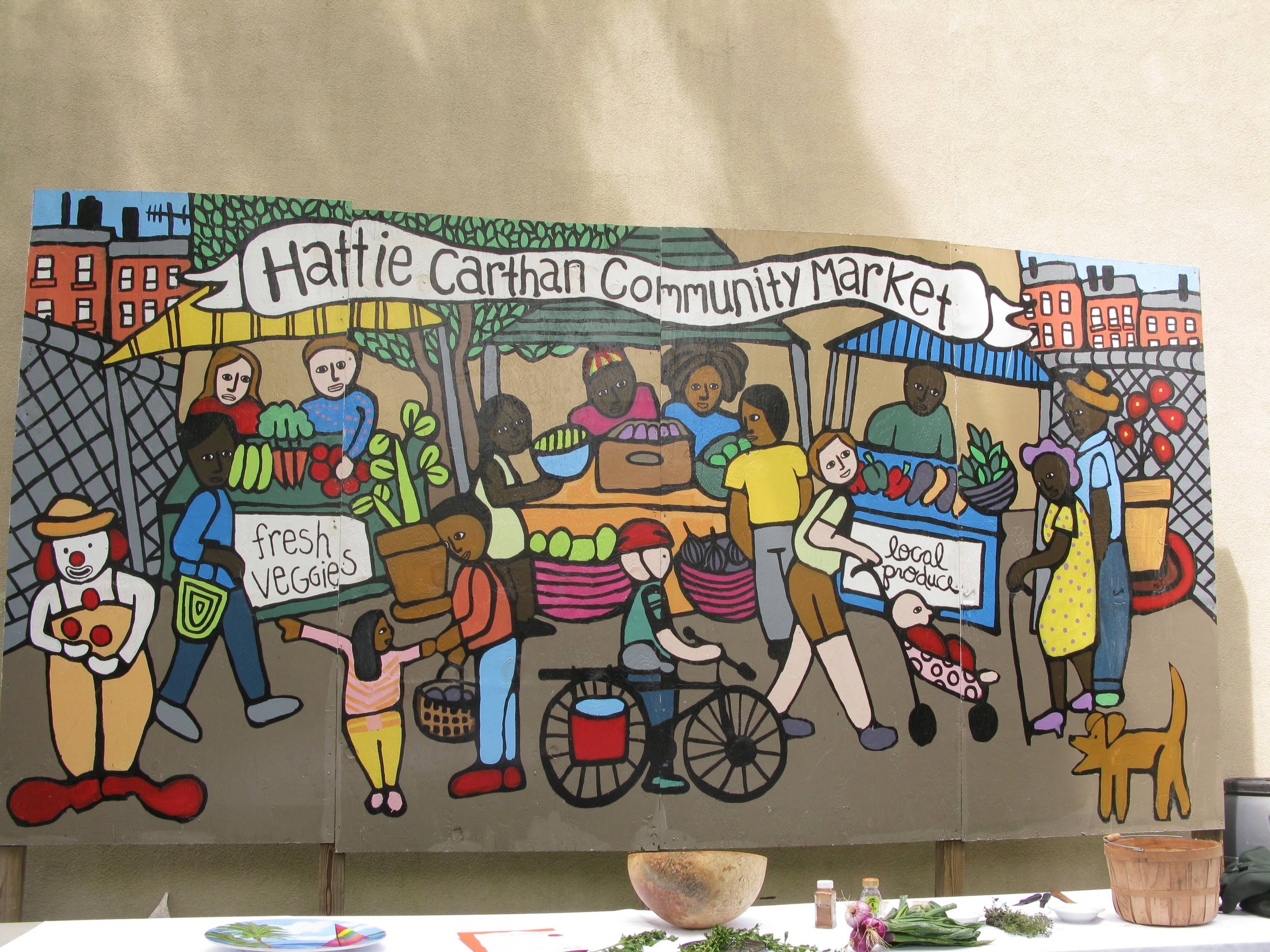 eeems/Flickr CommonsHattie Carthan’s legacy lives on at the Magnolia Tree Earth Center, and a community garden and farmer’s market that pay homage to her extraordinary activism.

Today, the Magnolia Tree Earth Center still carries on Carthan’s original mission in her name. The center describes itself as “an epicenter for learning, environmental stewardship and community development.” “We have gardening classes; a Tree Corps for children where we do what Hattie Carthan was doing back in the ’70s—teaching children how to care for street trees and tree pits, and then we have a bunch of health and wellness classes,” Wayne Devonish, board chairman of the Magnolia Tree Earth Center, told the New York Daily News in early February. “We’re really hoping to be that kind of beacon in central Brooklyn for expert horticulture, environmental awareness, and sustainability.”

Carthan has also continued to inspire other members of her community. Since her death in 1983, several other organizations have been founded in Bedford-Stuyvesant that bear her name and her ideals, including the Hattie Carthan Herban Farm Community and a community garden. The newest addition is the Hattie Carthan Community Farmer’s Market, founded by urban farmer and social justice advocate Yvonette Fleming whose work is in part inspired by Carthan’s legacy.

Each of these organizations impact thousands of city residents each year by providing access to fresh produce, facilitating conversations about environmental justice and bringing the community together in precious green space.

Carthan’s most famous tree, the magnolia, is still there at 677 Lafayette Avenue sheltering those who walk beneath it and towering so high it rivals the nearby brownstones. Each year, in late June or early July, it blooms. Some worry gentrification may eventually push out the Black families that have lived in Bedford-Stuyvesant for decades, some of whom surely helped plant Carthan’s trees.

The only thing constant in New York City is change, but sometimes a legacy can be planted that endures for generations. Hattie Carthan did just that.