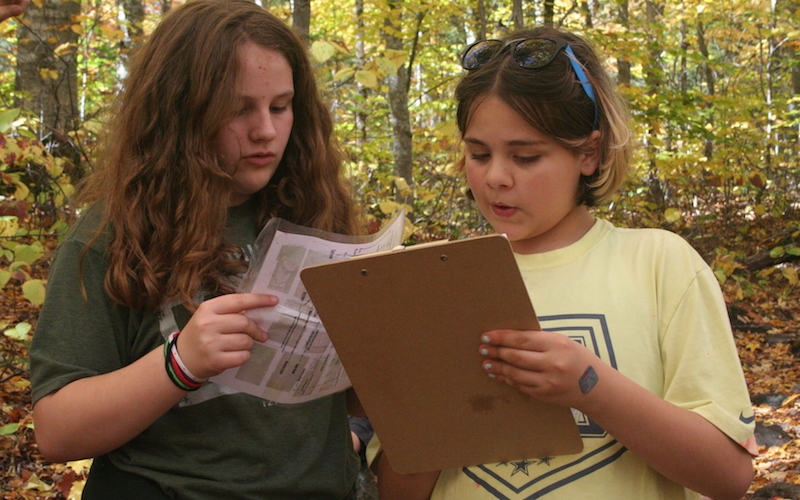 The science is settled: Since the mid-19th century, human activities have contributed to global warming by at least 1.8 degrees Fahrenheit, or 1 degree Celsius. If climate change continues at its current pace—or ramps up, as last fall’s United Nations Intergovernmental Panel predicted—our children will face ecological challenges previous generations could not have imagined: worsening food shortages, more frequent droughts and wildfires, coastline-threatening storm surges, and more.

Despite inheriting these ecological sins of their parents, a disturbing number of American kids may not be learning much of anything about climate change in school. A 2016 National Center for Science Education survey of 1,500 science teachers found that students spend, on average, less than five hours of class time per year on climate change, with some teachers avoiding the subject entirely.

AMC’s A Mountain Classroom is working to reverse that trend. Last fall, the program—which reaches 9,000 New Hampshire school-age students annually, with coursework ranging from forest ecology to leadership development—wrapped up a pilot of its four-session curriculum on climate change in two New Hampshire middle schools and one elementary school.

While climate change previously was touched on in many of those schools’ course offerings, Andrea Muller, AMC’s North Country youth education director, says it became clear that a standalone curriculum “was important for us as a country and dovetailed with AMC’s mission.” Muller says the long-term goal is to offer the curriculum at each of the 100 schools with which A Mountain Classroom partners and to conduct more immersive courses at AMC properties throughout the region.

Funded by a 2017 grant from the Portsmouth, N.H.-based Dorr Foundation, the curriculum, written for fifth- to eighth- graders but adaptable for use in high schools, takes an experiential yet decisively data-driven approach to teaching climate change. A first session is held onsite at AMC’s Pinkham Notch Visitor Center or Highland Center. There, students are taught the difference between weather and climate before venturing into the woods to observe and collect data on White Mountain ecosystems, and how they’re impacted by a changing climate.

In the following sessions, held either at an AMC lodge or back at school but always outdoors, students are split into groups to play games that teach them about the carbon cycle and the greenhouse gas effect. They also pore over decades of data on global carbon dioxide emissions, changes in North Country snowfall amounts over time, and local temperatures, noting any trends they spot.

“We want students to walk away understanding, one, what is climate change, and two, that they can do something about it,” says Alice Puccio, AMC’s education coordinator located in Coös County and one of the curriculum’s authors. “We want students to be able to look at a graph and understand what the data mean.”

As an example of those raw numbers, AMC staff scientist Georgia Murray cites statistically significant temperature increases, including warmer winter, summer, and fall nights, as well as warmer spring days in Pinkham Notch, higher temperatures on Mount Washington’s summit in the spring and overnight in summer and fall, and a snowpack in Pinkham that melts about 15 days earlier than it did in 1930.

Puccio says AMC has yet to receive any negative feedback from parents on the curriculum, crediting a pedagogy that is fueled by data, rather than by emotions or politics. “We talk about the sources we use; we reference the sources,” Puccio says. “We say, ‘Here are the numbers; here are the facts.’”

As damning as those facts may be, hope was alive when Kelly Horrigan, a science teacher at John H. Fuller Elementary School in North Conway, N.H., observed her students on the final day of the climate course. In a town hall format, Horrigan’s sixth graders came alive as they presented both the data they’d processed and the actions they were prepared to pursue to combat the effects of climate change—from taking shorter showers to starting recycling programs.

“We went from them not really knowing the difference between weather and climate to a week later, being able to talk about things they could do,” says Horrigan, praising AMC’s educators for bolstering a previously “nonexistent” climate curriculum. “They treated [the kids] like scientists: Here’s your task; figure it out. The kids really took to that and saw the value in it.”