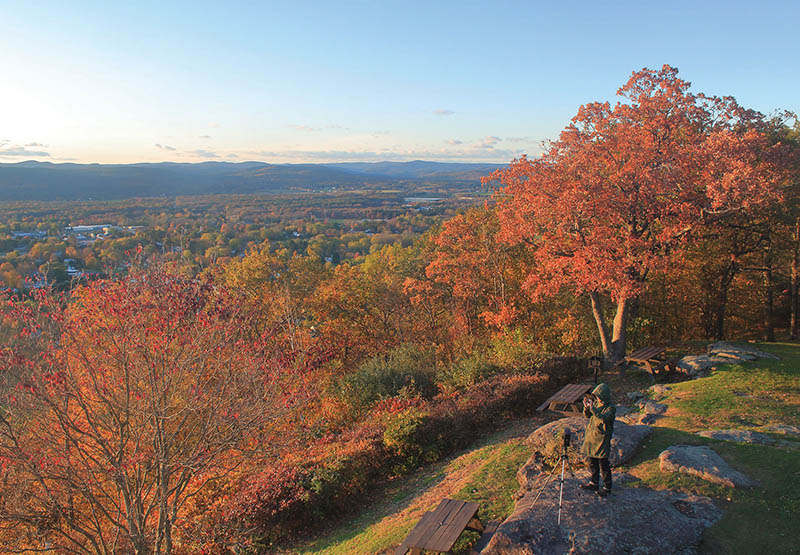 Good news, leaf peepers of New England: 2018 could be a banner year for foliage hikes.

According to the University of New Hampshire, historical trends show that tree leaves are especially colorful in years when the spring has been mild and wet, the summer has been rainy, and the early fall has been warm and sunny with clear, cool nights.

But you don’t have to head north to New Hampshire to see the brilliance. AMC Outdoors asked John S. Burk, the author of AMC’s Best Day Hikes in Central Massachusetts, for his top five foliage hikes in the Bay State. Get highlights below then pick up a copy of the brand-new book for turn-by-turn trail descriptions and route maps of these and many more leaf-peeping destinations.

Although Mount Sugarloaf’s south summit is only 650 feet high, it is ideally situated at the south end of the Pocumtuck Ridge, above a picturesque bend in the river. The less-visited, 791-foot north summit is higher and mostly wooded, although ledges offer westerly views across the valley.

The late afternoon and evening hours are ideal for photography, as the setting sun nicely lights the valley from the west. On clear evenings, you may also catch the memorable sight of the moon rising above Sunderland and the valley hills to the east. Fall foliage peaks in mid to late October, later than in the surrounding hills, due to the low elevation and milder climate of the Connecticut River valley.

The massive Quabbin Reservoir, created during the 1930s as the water supply for eastern Massachusetts, is southern New England’s largest conservation area. The numerous attractions of Quabbin Park, located at the reservoir’s south end, include an auto road with many scenic views and a stone lookout tower on the summit of Quabbin Hill, the park’s highest point.

Open seasonally, the tower offers 360-degree views of the reservoir, Mount Monadnock, Wachusett Mountain, the Pioneer Valley, and the Berkshire Hills. From the grassy clearing at the base of the tower, there are westerly views to the Holyoke Range and Mount Tom in the Connecticut River valley.

Located at the confluence of the Deerfield and Cold rivers on the eastern slopes of the Berkshires, Mohawk Trail State Forest is a place of dramatic scenery and considerable ecological significance. The steep valley slopes shelter some of the Northeast’s oldest and largest trees in groves that were never cut due to the rough topography. Researchers have documented more than 600 acres of old-growth forest, including many specimens between 200 and 500 years old. More than 120 white pines, which are mostly second growth, are at least 150 feet high. The 6,400-acre state forest is part of a large conservation corridor that includes Monroe, Savoy Mountain, and Kenneth Dubuque Memorial state forests.

Beyond trees, the wooded slopes are home to a thriving population of black bears, which are common in the hills of western Massachusetts. After being nearly eliminated by habitat loss and hunting in Colonial times, they have recovered strongly over the past half-century, thanks largely to the regrowth of mature woodlands, such as these. Although sightings are unpredictable, claw marks on the smooth bark of beech trees reveal signs of the bears’ presence.

The rugged ledges of Hermit Mountain, which form the southeast slope of the Northfield Mountain massif, rise sharply above Millers River valley. These unbroken forests form a crucial buffer that helps maintain the water quality of Millers River, the largest tributary of the Connecticut River in central Massachusetts. Moose periodically visit these woods, although sightings are unpredictable. During the autumn mating season (known as the “rut”), females make high-pitched wailing calls that may be audible through the trees.

Nearly hidden within this dramatic scenery of rock ledges, caves, and sheer cliffs is Hermit’s Castle, a rock cave so named because it was the home of the legendary local recluse John Smith for three decades. According to a biography compiled by the naturalist John Foster, Smith was a Scotsman who worked briefly as an actor before immigrating to America and settling at the cave in 1867, before the land was subdivided by the town.

After the location of his unusual home became publicly known, local residents and tourists alike flocked to the “castle.” One newspaper reported that Smith had entertained more than 15,000 guests by 1874. He was an avid gardener, and the rock walls in front of the cave likely are old flower beds. Following a dispute with another settler, whose cellar hole is also visible nearby, Smith moved to a cabin a quarter-mile away then left the area shortly before his death in 1899. The site was rediscovered in the late 1990s by Foster, who created Hermit’s Castle Trail.

Mount Watatic, at 1,832 feet, is the southern terminus of the Wapack Range, a chain of low summits that extends more than 20 miles. The red maples start to change color at the onset of the fall foliage season in mid-September, and in early November the golden needles of tamarack trees, also known as larch, add a last splash of color. The forests on the upper slopes include groves of spruce and fir, which occur on ridges at elevations between 1,000 and 2,500 feet in central New England. Northern birds in these woodlands include winter wrens, olive-sided flycatchers, and ruby-crowned kinglets.

Mount Watatic’s summit offers sweeping views of Wachusett Mountain to the south, the tall buildings of downtown Boston across the coastal plain to the east, and a glimpse of Mount Monadnock through spruce trees to the north. Concrete supports mark the site of an old fire tower that was removed in 1997. Even better views await at the open ledges on the east side of the summit. Mount Watatic is an outstanding hawk-watching destination, thanks to its location in the heart of a migratory corridor. Observers are often present counting birds during peak migration in late summer and early autumn.