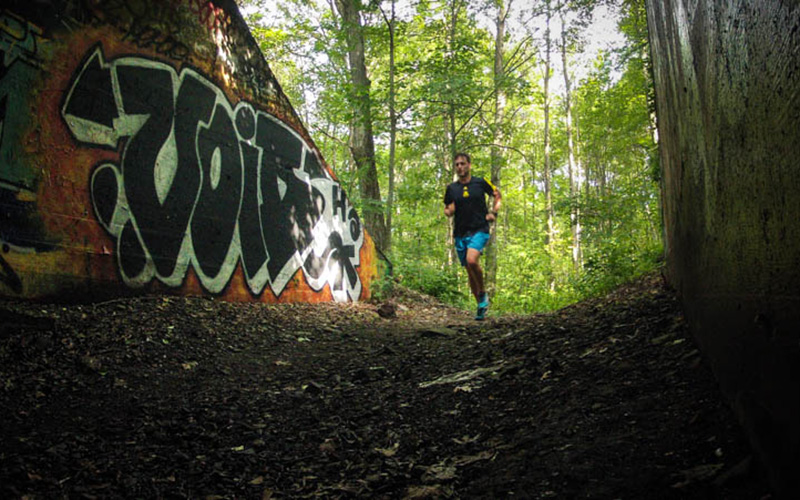 Look up from behind the steering wheel on northbound I-95, between exits 18 and 19 in Needham, Mass., and you might catch a glimpse of a trail runner or a mountain biker traversing a thin ribbon of single-track atop s grassy embankment. It’s the only visible hint from the interstate of what’s hiding behind the trees. If you decide you want to explore for yourself, all you have to do is swing off the highway at exit 19 and pull into the Cutler Park Reservation parking area on Kendrick Street.

Cutler Park’s 600 acres consist mostly of wetland, with Kendrick Pond, near the parking lot, giving way to a vast marsh that extends along the Charles River. But you’ll find about 9 miles of great exploring on the Blue Heron Trail and a series of side trails. Even though there’s only one decent hill (the rise along the highway), Cutler is popular with mountain bikers, and that’s generally a pretty good sign trail runners will enjoy the trails as well.

From the wide, gravel path circling the pond to the single-track that seems to narrow inch by inch the further south I went, my run felt like an obstacle course unfolding in slow motion. In the first mile, I climbed and descended the hill over the highway. Then I cruised through a marsh along a long boardwalk, surrounded by head-high pussy willows. After that, the trail—narrower still—was pocked with deep pools of mud, so I bounded back and forth to avoid soaking my shoes. Then, suddenly, I was high-stepping over roots that ribbed the trail like a swath of corduroy.

Those obstacles were balanced by serene sections. I passed through soft, flat stretches tinted orange from a layer of pine needles; a lush fern grove; and a verdant tunnel formed by tangled undergrowth arching over the trail. Before I knew it, I’d covered almost 3 miles and was starting to think about turning around.

And then, all of a sudden, the trail passed into a real tunnel: a graffiti-covered concrete tube beneath an old railway. I stopped to take a few pictures and sip some water. In the few minutes I stood there, two mountain bikers rolled by, continuing toward the southern end of Cutler, where you can follow Needham Street over the Charles River to a series parks on the opposite side. By connecting to Millennium Park, Brook Farm Historic Site, and Nahanton Park, you can cover more than 20 miles via trail in Needham, Newton, and West Roxbury.

Cutler Park is the sort of place that’s just big enough for a good run—and holds enough surprises to keep those miles interesting.