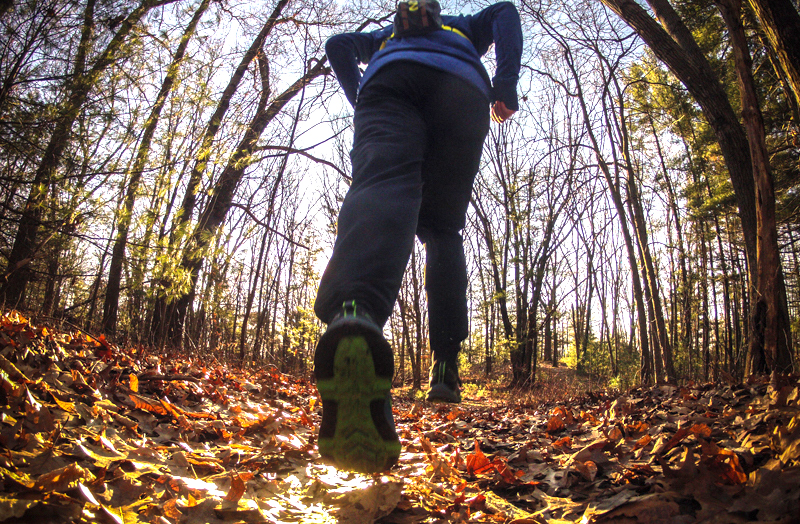 A few months ago I was scanning a local map and noticed a sliver of green tucked up against Interstate 95, west of Boston. It didn’t seem substantial enough for decent run, though, and it sat in the middle of an area I knew only for its office parks and shopping centers. Then, a couple weeks ago I was looking for a short trail run nearby and decided to give that green sliver—Waltham’s Prospect Hill Park—a second look. I’m glad I did.

Based on the trail map, which shows a park road bisecting Prospect Hill north to south, I figured I’d be exploring a series of short side trails rather than following a continuous loop. Sure enough, after climbing the paved road from the parking area on Totten Pond Road, the first trail I tried quickly reached a dead-end behind office buildings that overlook the highway. But then the next trail I turned down kept going.

I followed the wide gravel path behind more office buildings and eventually ended up deeper in the forest. The path narrowed and became more rugged. Rocks and roots interrupted my strides. I turned right at each junction, staying along the western edge of the park, and the trail didn’t end until I hit a residential street at the south tip of the park, nearly 2 miles into the run.

In a few spots, pieces of crumbled pavement peeked through the fallen leaves, a hint of a very different type of trail once existing here. Historians have traced the history of this land back nearly 300 years, when a series of land grants allowed settlers to begin farming here. Remnants of stone walls can still be seen throughout the forest and portions of the park road apparently date back to the 1730s.

Having covered the park end-to-end, I began looping back in the opposite direction, crossing the park road and climbing into the hills that dominate the southeast corner. Stone stairs lead up a series of steep slopes, each culminating in a surprisingly dramatic view of the Boston skyline. After pausing to stretch and enjoy the view, I ran over the tops of the hills and made my way down the other side. The trail network is sparse in the northeast portion of the park so I followed the paved road for the final stretch of my run.

Prospect Hill proved to be a pleasant surprise. It’s no place for a long run, but with views of Boston and easy highway access, it’s a great spot for a quick escape from the city. And if you happen to work along I-95 west of Boston, you’d be hard-pressed to find a better place to spend your lunch hour.