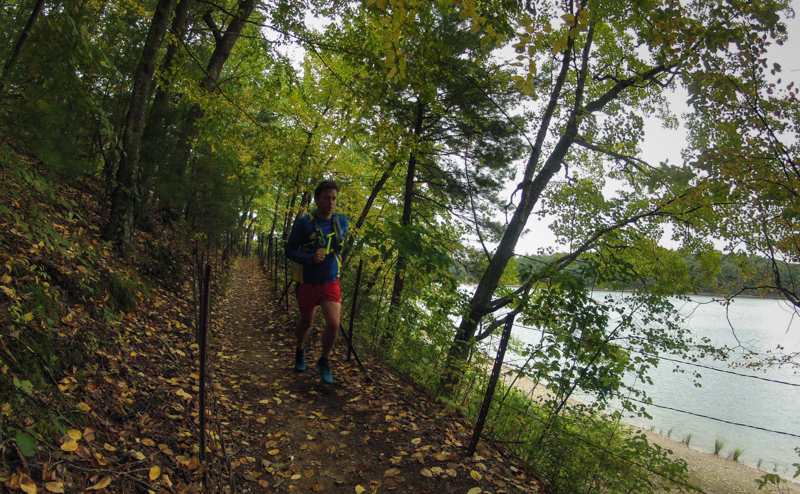 In my experience, magical runs take one of two forms. In some, you enter something of a flow state: Everything feels easier and faster than usual; there’s a feeling of invincibility. In others, singular moments anchor a run in your memory. Unfortunately there’s no way to predict when we’ll be graced with either experience. The former is an elusive state that we runners constantly chase. And the latter is a matter of luck—though it helps when you’re running in special places. During a recent trail run at Walden Pond State Reservation, I got lucky.

Walden Pond is, of course, famously the setting for Henry David Thoreau’s contemplative Walden. Today, it’s a popular swimming, paddling, and hiking spot. The Pond Path traces the shoreline and several additional miles of trail wind through the forest to the east and west of the water. The Bay Circuit Trail enters and exits the reservation to the south and north, connecting its trails to Hapgood Wright Town Forest and Pine Hill. Last fall I turned these trails into a loop, starting and finishing at Lindentree Farm. That run cut straight through Walden Pond; now I wanted to explore all those side trails I had ignored then. From the beginning, it was a memorable few miles.

Early on a cold morning, a number of cars already sit in the lot by Walden Pond’s visitor center (be warned—there’s an $8 parking fee year-round). I cross the road and begin descending toward the water. Before reaching the bottom, I can hear hockey sticks slapping the ice and skates swooshing through tight turns. Far out on the pond, two games are going on. Little kids, already steadier on their skates than I ever was, skate around the edges while the grownups jostle for the puck. I pause to enjoy the Norman Rockwellesque scene, then jog into the forest along the western shore.

The woods to the west of the pond feature a low wetland—Heywood’s Meadow—and a high rocky hill. As I descend from that formation, known as Emerson’s Cliff, the clatter of hockey sticks alerts me that I’m back near the pond. Before I’ve completed my loop and rejoined Pond Path, a familiar shape swoops down from a tree in front of me: A pileated woodpecker. The massive bird, mostly black and white, has a distinctive red crest atop its head. It’s just the third time I’ve spotted one in the wild. I stop to watch as it glides from tree to tree in an arc around me. Once it vanishes in the direction I’d just run from, I start running again, beginning a clockwise loop of the pond.

There’s an inherent contradiction about Walden Pond: This spot famous for one man’s solitary reflection is overrun with crowds in warmer months as people swarm to the reservation’s beaches and trails. Winter, though, is another story. I cross paths with only a handful of other people during my run, even near the site of Thoreau’s cabin. It’s there I turn away from the water to explore the cluster of trails on the eastern side of the pond. Approaching Old County Road, a wide dirt path, I’m startled by a flurry of movement directly ahead. Four deer, having spotted me before I saw them, bound through the trees. I see their bright white tails pogo-sticking up and down. Their escape is flawed, though, as it parallels the trail I’m turning onto. The pattern repeats: I run a couple hundred yards, they spot me and sprint ahead, over and over. Finally I turn again, back toward the pond and my car, and the deer watch me go.

Somehow in just 3 miles, I’ve stumbled upon one memorable moment after another. With the season’s first blizzard forecast for a few days later, I’m thankful that what could be my final trail run for a couple months has been so magical.