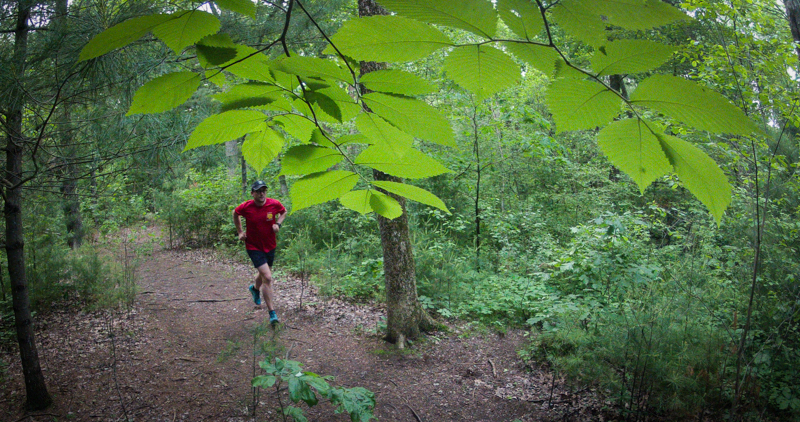 I admit the reason I ended up at Cat Rock Park, in Weston, Mass., was its proximity—just over 4 miles from my front door. Beyond that convenience, my expectations were low in part because of its other name: 80 Acres. But it turns out that’s just the name of the meadow in the park’s center. In fact, Cat Rock is about double that size, with 5.5 miles of trails to run—some traversing what used to be a ski slope along its western edge.

I started my run by cutting through the center of the park, sticking, at first, to the broad fire road that leads to a pond and then 80 Acres. It’s a picturesque setting in the middle of the forest: a bridge cuts over a small waterfall where the pond empties into a brook. After circling the meadow on the other side, I reached single track trails and climbed up into hills on the northern end of the park. The trails were well maintained but challenging, winding through the trees and up and over rocky outcroppings. In classic Greater Boston fashion, stretches of trail pass alongside residential areas. Sweeping Weston back yards were visible just beyond an old stone wall. At one point I realized a pink tree house was looming 20 feet above me, then the trail swerved away from the homes and it vanished behind me.

One trail leads out of the park to the north, emerging near the parking lot at a Boston Sports Club. There I doubled back, making my way down to the meadow again. You can’t quite create a single large loop here, so expect to criss-cross your path a few times, but that doesn’t mean you can’t piece together a nice run. From the flats east of the pond to the hilly northern reaches and ski slope to the west (which I avoided on this day), Cat Rock surprised me with its variety.

Two important caveats before you head there: