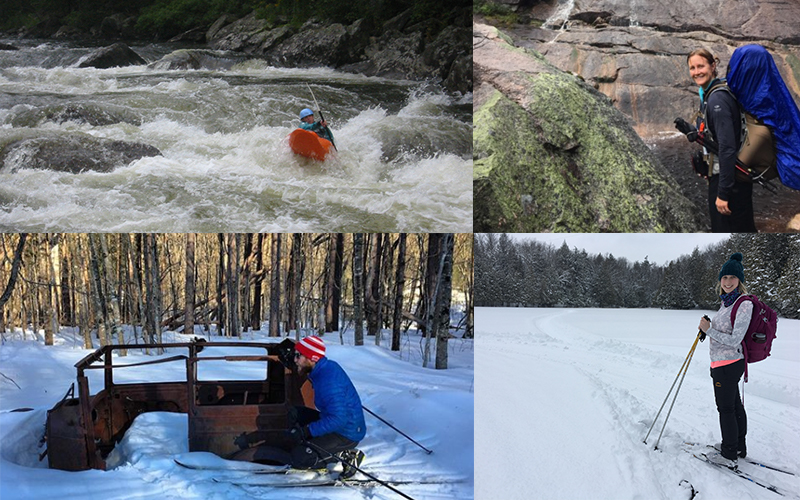 We’re all an expert in something. Whether it’s running a marathon or baking the perfect cake, we have a skill we can talk about with confidence. AMC is fortunate to employ pros in all types of outdoor recreation, from hiking to paddling to skiing, but even most of those who excel in a particular sport have a story about stepping out of their comfort zones and trying new things outdoors—usually with a steep learning curve.

Take me, for example. As a mostly summertime hiker and backpacker and a trip co-leader for the Boston Chapter, my wintertime hobbies are limited to occasional sledding in the park. So when I found myself visiting Norway in mid-January, I tried to play it cool on a day spent cross-country skiing. I was familiar with downhill skiing and thought, How different could this really be? The answer: very different.

I fell over and over. And over. My attempts to climb some of the steeper inclines turned into a comical struggle that ended with me sliding backwards into a group of Norwegian children who were clearly annoyed I was taking up half the trail. At one point, I took off my skis to walk a section that seemed far too challenging for me then thought better of it and veered straight to the lodge for hot chocolate and a hamburger.

Despite the embarrassment, I enjoyed being out in the snow and trying something new, so upon my return to the States, I booked a lesson at a local cross-country ski track—and showed up with a list of questions.

WELCOME TO THE YARD SALE
An outdoor leadership training instructor with AMC, Kristi Hobson Edmonston’s primary outdoor activity is hiking, but there are plenty of others she has tried—or has been willing to try at least once.

Growing up an hour north of Philadelphia, Edmonston didn’t have much access to ski slopes. So when she arrived in New England after college, she decided to take a lesson to see what it was all about.

“I spent most of the lesson on my tush,” she says, recalling how her instructor’s encouragement led her to believe that picking up the sport would be easy. “I acknowledge that, as someone at least twice the size of the kids on the slopes, [those kids] are definitely better than me, and I am scared of running them over or facing their parents after I run them over.”

The experience didn’t completely deter her from the slopes, though: Edmonston decided to switch it up and try snowboarding. What led her in that direction? “There’s an expectation that you fall a lot,” she says. Her first attempt to use the chairlift resulted in an immediate header, followed by an army-crawl with the board strapped to her feet. “I think the operator even laughed at me,” she recalls. “I just wanted to get out of the way before I figured out how to get up.”

Like Edmonston, Nancy Ritger, the program manager for AMC’s huts and Cardigan Lodge, had her hat handed to her by downhill skiing. Ritger loves any activity that requires training and has a set goal. In the winter months, she participates in cross-country ski marathons that range anywhere from 30 to 50 km each. And in summer, she’s an active triathlete.

With so much practice, Ritger’s muscle memory is synced to cross-country trails. But when she attempted downhill skiing, she had to readjust both her physical tendencies and her expectations.

“I work with a lot of adult learners and have seen how difficult it can be for adults to fail, so experiencing this for myself really sent that lesson home,” she says.

UP A CREEK
Former AMC Youth Opportunities Program leader Lindsay Watkins says mountain biking is her go-to sport, especially with easy access to trails near her home.“I really like the speed aspect, as well as the technical aspect,” she explains. “It gives me enough of an adrenaline rush, but it’s also not totally terrifying.”

Ever-seeking that adrenaline rush, Watkins decided to try out whitewater kayaking while in college at the suggestion of a friend. “There’s a stream by the school that would get high after a rainstorm, and one afternoon I went to paddle with a friend. I thought I had a good grasp on the techniques but ended up losing my boat,” she says.

Watkins survived the particularly rough section of river intact, but she and her friend ended up on opposite banks and spent a few minutes panicking over what had happened. When they found each other, they realized the boat, borrowed from the outing club, had washed far downstream and was missing.

“My kayak was pinned upside down in a rocky area, and the people who found it thought the owner had drowned,” she says. “Fortunately, a friend of mine was downstream and knew the kayak was mine.”

It was an important lesson for Watkins and gave her a healthier respect for the water. “There’s this art of suffering, and good judgement comes from experience,” she says. “I got my ego handed to me on that trip. We’ve all been there and done it, and had things happen that were scary and made us feel like an idiot after. But you get more competent with experience.”

SKATE SKITTERING
With all of New Hampshire’s alluring trails, Joe Roman, AMC’s campsite program and conservation manager, couldn’t really avoid getting into cross-country skiing. After frequently crossing paths with skate skiers, he decided to give that discipline a try. A variation of classic cross-country, skate skiing was developed by racers to ski at faster paces. Unlike the classic straightforward movement, skate skiers propel themselves through a kick-and-glide motion.

But once on skate skis, Roman realized that, even if they follow the same trails, the two methods are very different.

“When you watch a good skate skier, it’s like poetry in motion,” he says. “I definitely had a learning curve and made plenty of mistakes in the beginning. You really can’t help but look like a newborn deer taking your first steps.”

Which is a good reminder: Those deer had to learn to walk, too. It’s easy to forget that practice is key, and even the most die-hard athletes have fallen down.

“Sometimes, as adults, we forget that you don’t have to take everything so seriously,” Edmonston says. “Anytime you try something new, whether an outdoor pursuit, academic, even at the gym, the ability to laugh at yourself can go a long way.”