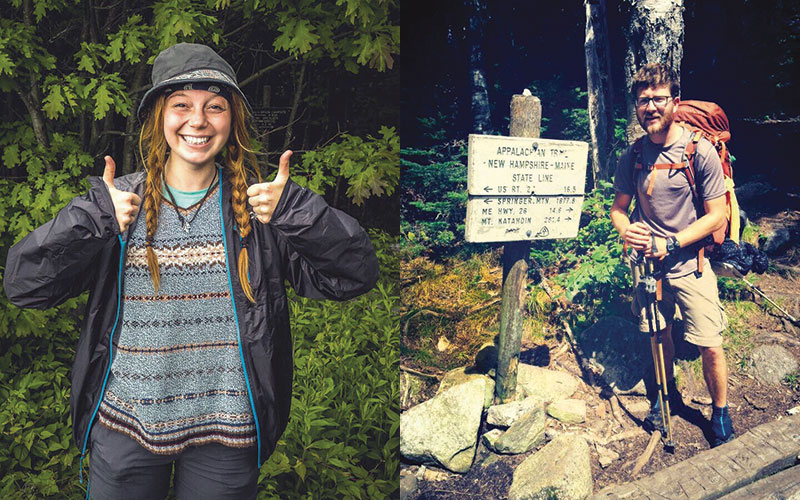 Thank a Ridgerunner! Give Elise Laflamme and Mike Baggot high fives if you meet them on the Appalachian Trail.

Have you ever met a Ridgerunner while hiking on the Appalachian Trail? For the AT’s entire 60 miles in Connecticut and its first 17 in Massachusetts, these AMC staffers serve as the trail’s eyes and ears: talking to the public about Leave No Trace principles, taking care of blown-down trees, gathering statistics on trail use, reporting back on conditions to AMC trail committees, and even handling the dirty job of privy maintenance. After six months hiking 8 to 12 miles a day, a Ridgerunner knows the AT like the back of her hand, and she’s eager to talk about it. So, if you see these two—Mike Baggot, 31, of Nashville and Elise Laflamme, 21, of Littleton, N.H.—before their season wraps in October, be sure to say thanks.

How did you find out about the Ridgerunner program?
Baggot: I thru-hiked the Appalachian Trail in 2015 and met a few Ridgerunners then. I worked as a Ridgerunner last year, and this year I came back as the coordinator.
Laflamme: I go to the University of New Hampshire, majoring in outdoor education. At the end of the school year, my advisor asked what I was doing for the summer. I didn’t know. A few days later, I had the job. I wasn’t totally prepared, but I was excited.

Why take on this level of personal responsibility for the trail?
Baggot: I truly care about the trail and its future. We need younger people doing this stuff. But don’t get me wrong: At the end of the day, this is a paid position. The people who really deserve all the credit are the people who’ve been volunteering to do this for years.
Laflamme: I was really excited to get out there and educate more people about Leave No Trace principles, about being stewards of the Earth. We’ve got to maintain what we have now and keep it preserved for future generations.

What has been the most rewarding moment for you?
Baggot: Going into it last year, being a former thru-hiker, I was excited to meet all the other
thru-hikers and to be back in that realm. But as the season went on, I got more interested in talking to the people who weren’t as familiar with the AT. I never would have expected that dynamic to change.
Laflamme: A big part of this job is being able to deal with two things. First, the solitude. You’re out there five days at a time, and you have lots of interactions with people, but those are mostly 10-minute conversations with hikers. And second, I went into this summer job of hiking after a long winter of sitting on the couch, doing homework. It has been a physical challenge, as well as a mental one. I was curious to see if I could do it. So far, I really enjoy it.

What about the most memorable?
Baggot: Last year I was sleeping in our caretaker tent at Sages Ravine, and some people woke me up at 2 in the morning, panicking. They were lost and didn’t know where they were. I was just waking up, so I was trying to take stock of the situation, but there was also a language barrier; they were from Hungary. I took them to the spot where the AT meets the trail to the tent site and asked them: “Did you get here from the north or the south?” And they said, “We’ve never been here before.” That trail was the only way to the tent site, so they had been walking off-trail in the woods, in the middle of the night, in just shorts and T-shirts, no map, completely unprepared. That reminds me how important it is for us to have a presence out here.
Laflamme: I met one man who had been on the trail since May. He mentioned he was using the time to reflect on his life. He’d just lost his father. It was helpful to hear what the trail was doing for him. The trail has given me a lot of reflection time, too. Doing this, and seeing that strong females are out here, alone in the forest, it definitely has given me lots of self-confidence.

Jennifer Wehunt is the editor in chief of AMC Outdoors.