The Next Northern Pass? AMC Intervenes on NECEC 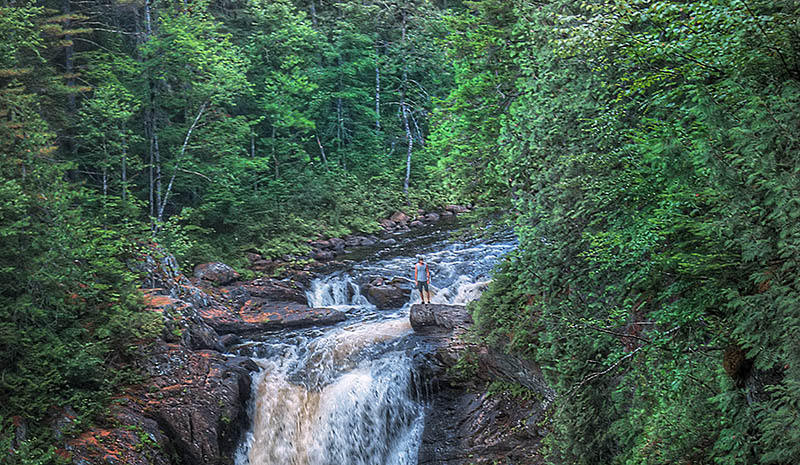 IpotatoI/Creative Commons on FlickrCould the next Northern Pass cross scenic Moxie Falls, just south of the Kennebec River in Maine?

Update: On Thursday, October 18, 2018, Central Maine Power announced they will bury the proposed transmission line under Kennebec Gorge. While this satisfies one of AMC’s concerns regarding the project, it fails to address others and AMC remains opposed to the project. Read the updated statement here.

The Appalachian Mountain Club has officially been designated an intervenor opposing the plan to build a 145-mile, above-ground transmission line from Quebec to Massachusetts, crossing through Maine—a project known as New England Clean Energy Connect (NECEC). Of this stretch, 53 miles would require a new, 150-foot wide corridor to be cut through the undeveloped forest of western Maine, including a crossing over the Kennebec Gorge. The project is intended to supply Quebec hydropower to Massachusetts in an attempt to meet the latter’s renewable energy goals.

For those who followed the saga of the now-vetoed Northern Pass, the long-contested transmission line that would have bisected New Hampshire, NECEC sounds all too familiar, simply replacing Northern New Hampshire and the White Mountains with western Maine.

“The proposed route will slice through a globally significant forest,” says Susan Arnold, AMC’s vice president for conservation, of Maine’s western region. “This kind of infrastructure fragmenting the forest can have a lot of implications for the health of the forest, climate change, wildlife, and more.” The other 91.5 miles of the route would be built along existing powerline corridors but would require widening those cuts and building taller towers.

After Northern Pass was rejected by New Hampshire officials in May 2018, Massachusetts returned to the pool of energy projects it originally had solicited to deliver renewable power. Massachusetts is now working with Central Maine Power and its parent conglomerate, Avangrid, to push the NECEC project forward.

AMC has cited four major concerns with the project as it is currently proposed, number 1 being the scenic and ecological impacts on Maine’s forests. To avoid this impact, AMC has proposed that NECEC bury the transmission line along existing nearby roads.

“We think this project would have a serious ecological impact, much of which is avoidable by collocation and burial,” says David Publicover, a senior staff scientist and assistant research director for AMC. “As we develop our 21st century energy infrastructure, we should get it right and use the best available technology.”

Concerns 2 and 3 relate to the scenic impacts on the Kennebec Gorge, a wild and undeveloped stretch of river that is one of the Northeast’s premier whitewater destinations, and on segments of the Appalachian Trail (AT). In the current plan, the proposed transmission line would cut through both of these significant ecological and recreation sites. Although an existing transmission line already crosses the AT, “What they are proposing to do is widen the crossings, making it even more of a disruption,” Arnold says.

Finally, AMC has concerns about the source of the energy that will be transmitted along the line. “There’s also an outstanding question of whether the transmission line will actually have greenhouse gas benefits and reduce carbon emissions,” Publicover says. “There’s currently not enough evidence to show that this project isn’t just shifting power from customers in Canada to those in Massachusetts.”

John Carroll, a spokesperson for NECEC, says the energy that will travel through the NECEC transmission line is, in fact, new clean energy. He also provided the following statement:

Along with AMC, 21 other groups and individuals—including the Natural Resources Council of Maine and Trout Unlimited—were granted intervenor status by the Maine Department of Environmental Services. Intervenor status allows an organization or an individual to present witnesses and to cross-examine witnesses in public hearings. (Without intervenor status, a party is limited to filing written comments.) A public hearing has not been scheduled yet but is expected no earlier than mid-December.

AMC members and the general public can learn more about NECEC and AMC’s position on the NECEC ahead of the public hearing.