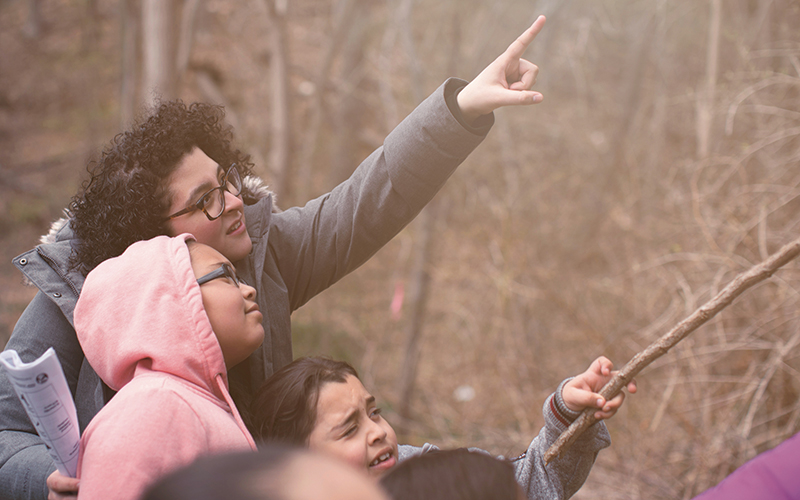 In its third year, the Peter Roderick Trail Award Scholarship was given to six AMC members, all first-time trail-work volunteers on AMC’s Maine Woods property. Established in 2016 by the Maine Chapter in honor of a longtime executive committee member, the scholarships cover the cost of food and lodging on volunteer trail-work trips based out of AMC’s three Maine Woods lodges. The chapter hopes to re-create last year’s success: Two 2017 scholarship recipients returned as paying participants in 2018. To apply for a 2019 scholarship, visit amcmaine.org.

Outdoors Rx, the AMC program that helps families get outdoors in the greater Boston area, implemented a badging program in April designed to encourage spending more time outside. Participants receive a booklet with spaces for 10 stickers, each representing an outdoor activity. When the child completes all 10, he or she receives a junior naturalist badge. Families can pick up a copy of the booklet during any Outdoors Rx activity. See a full schedule and learn more at outdoors.org/outdoorsrx.

AMC staff and volunteers built two new campsites along the Connecticut River Paddlers Trail this summer, bringing the organization’s total up to five. The primitive sites—located on Elwell Island in Northampton, Mass., and on Kings Island in Enfield, Conn.—are for human- powered boats only. AMC’s Kristen Sykes, who is spearheading the trail’s southern expansion, says she expects each site to sleep 50 to 100 people in the next year. The sites are free and first-come, first-served, although campers can check availability via an informal calendar at connecticutriverpaddlerstrail.org.

AMC is on its way toward a whole new realm of conservation, with Maine staff working to have the 75,000-acre Maine Woods Initiative designated as a Dark Sky Reserve. If the International Dark Sky Association (IDSA) approves the application, which AMC plans to submit in early 2019, the region would be the second certified Dark Sky Reserve in the United States, after a parcel in central Idaho, and the 10th internationally. In order to receive the designation, applicants must meet a strict standard for next-to-zero light pollution, with a near pristine view of the night sky, and secure a pledge from the surrounding communities to help protect this “dark core zone.” Leading up to filing the application, AMC plans to perform outreach to gather community support.

5. Next-Gen Citizens
AMC partnered with fellow nonprofit The Wilderness Society this summer to introduce a new program for students ages 16 to 18. The Outdoor Citizen Skills Expedition launched its inaugural two-week session in July, with the goal of introducing the seven participants to conservation and change-making. Topics included outdoor skills, leadership, advocacy training, and the history and value of public lands. The teens’ itinerary included backpacking and canoeing in the White Mountain National Forest, seminars on citizen science at AMC’s Highland Center, and meetings with elected officials in Boston. AMC and The Wilderness Society hope to continue and expand the program in the coming years.