EXPLORE AMC
AMC Outdoors > Bulletin: Across the Region > From the Magazine 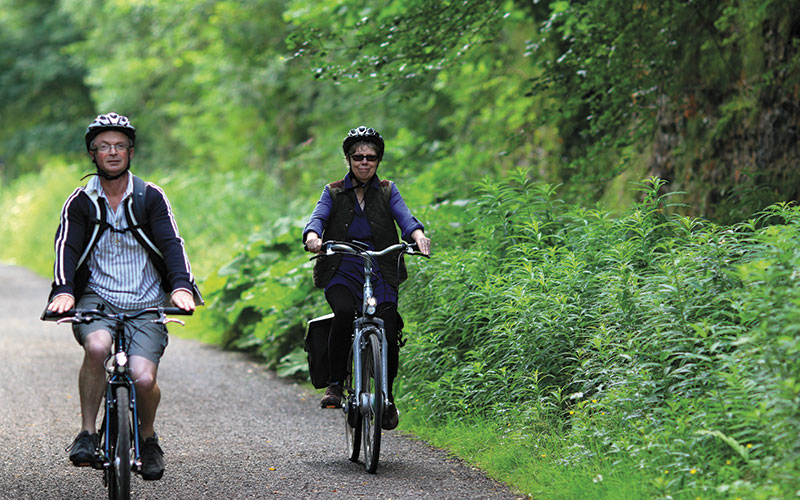 As electric bicycles, or e-bikes, have grown in popularity, they’ve encountered pushback from a group that might surprise some: mountain biking enthusiasts. The potential for conflict arises, in part, from e-bikes’ impact on trails but also from mountain bikers’ concerns that their own diligence as good backcountry citizens could be undone by association.

E-bike advocates, in turn, say the augmented cycles make mountain biking accessible to riders who otherwise would be unable to participate in the sport.

“I think getting more people out on trails is very important for the whole dynamic of conservation and open space preservation,” says Philip Keyes, president of New England Mountain Biking Association (NEMBA). “That said, when you’re bringing in a lot of new people who don’t have the necessary experience and don’t understand how to share trails responsibly, I think that is going to pose a significant problem.”

E-bikes get a boost of power from an electric motor, allowing the cycles to reach speeds up to 20 miles per hour. By contrast, mountain bikes average about 10 to 15 mph on downhills and 2 to 5 mph when ascending rough terrain.

Land managers have responded by restricting e-bikes to areas where motorized vehicles are permitted, such as ATV trails. This is the case on all state- managed land in New England, although some Northeastern states, including New Jersey, have yet to establish a policy. In the White Mountain National Forest, e-bikes are allowed only on snowmobile trails in winter.

Because policies are so new, many riders don’t realize e-bikes are prohibited in some areas. To raise awareness, NEMBA is encouraging bicycle dealers to educate customers. The group is also asking land managers to post signage at parks and kiosks, explicitly stating that e bikes are not permitted where mountain biking is common. AMC is in the process of developing its own policy.

Bicycling, AMC Outdoors, Bulletin: Across the Region, From the Magazine, September/October 2018